The Mavericks win their third game in fourth night thanks to some fantastic bench play, defense that was just good enough and, most importantly, a superstar who is just too good.

Sometimes, superstars don't let their team lose. And when Dirk Nowitzki scored 31 points on 14 shots, it was just one of those nights.

On the back of "that guy," the Mavericks and the Utah Jazz traded blow after blow after blow -- the final tally was 18 lead changes and 17 ties -- but as any playoff team should do to a lottery squad, made sure the nonsense stopped in the fourth quarter.

After struggling to even score 12 points the previous night in a loss to the Warriors, Dirk made it clear that it was his game. Something about the Jazz sets him off, because of his 19 regular season performances of 40 plus points, three have come in the state of Utah, more than any other team.

Seriously, just marvel at this shot chart. The efficiency displayed by a player who didn't even attempt a shot from the most efficient place on the floor -- at the rim -- is just astounding. 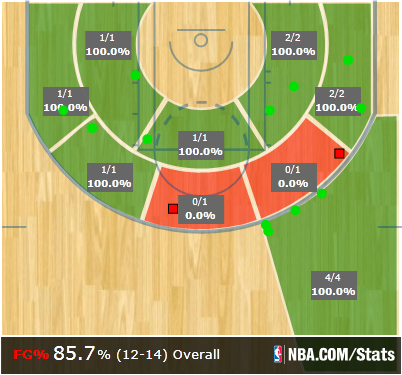 His return to the game in the fourth quarter is what allowed the Mavericks to finally pull away from the peskiness of Utah. For what must have been four or five straight possessions, it was a Monta-Dirk pick-and-roll. Nowitzki had already burned them time and time again, allowing Monta to waltz into the paint. He found Calderon for a three pointer, finished a floater on another and dropped the ball down to an open Dalembert for...okay, yeah, Sam botched the finish, but it was a good pass from Monta.

And then, when the Jazz forgot to cover Dirk for a split second, he buried his fourth three-pointer, all while absorbing contact and being knocked back to the floor.

The first half was some of the most back-and-forth basketball the Mavericks have played this year, with 12 lead changes and 10 ties. That's a lot for a whole game, but the two teams traded mini-spurts of five or six points back and forth and back again.

For the Mavericks, it was Dirk getting mad from the very first second of the game, allowing him to pass John Havlicek for 12th on the NBA all-time scoring list. He opened the game with a jumper from the post, followed it up with a pick and pop, and then, just to prove that he wasn't happy about last night's game, buried a 28-foot three pointer.

He would score a 16 first half points and, more importantly, was +11 at halftime -- in sharp contrast of Monta Ellis, who shot 1-of-7 and was minus nine.

Give Monta some credit for attacking consistently and failing to get the call, because the referees were pretty weird -- calling several offensive fouls on plays that usually go by without question, but not rewarding contact around the rim. But still, the second part of the Mavericks' two-headed dragon was subpar.

Utah's two-headed dragon for tonight was, apparently, Enes Kanter and Trey Burke. Kanter had 14 points (6-of-8) and eight rebounds, and Burke sliced the Mavs for 14 and a trio of assists.

Devin Harris picked up the slack for Monta, ending the second quarter with a pull-up three and then a stop-on-a-dime-and-leave-change jumper from the elbow, and the Mavericks took a meager two-point lead into halftime.
The third quarter was equally up-and-down, even though the quarter would eventually equal out at

Samuel Dalembert picked up his third foul halfway through the second quarter, and when he was called for his fourth, three minutes into the third quarter, Carlisle opted to go with Sarge James. He tried hard and made a couple of plays, but also showed through with some inexperience on defense.

But with the fourth quarter came more back-and-forth. The Mavericks build a bit of a cushion before Dirk left the game for his patented mid-quarter rest, only to see it all almost go away while he sat. But the Jazz couldn't quite make up the lead, and once Dirk jogged back onto the court with four minutes to go, they must have slumped their shoulders. They had missed their chance.