Statsketball: Is Dallas ready for the postseason?

As the Mavs get into the thick of the hunt for a bottom three playoff seed, I take a look at this Mavericks squad statistically to see how they're doing.

Share All sharing options for: Statsketball: Is Dallas ready for the postseason?

As of the writing of this, the Mavericks have 15 more games until the end of the regular season. Dallas is in a desperate hunt for one of the final seeds for the playoffs, and is caught in a death match between Memphis and Phoenix that will likely come down to the very last game.

While the Mavs are trying to lock up one of the coveted postseason slots, they're also trying to nail down their exact "post-season form." Teams play differently in the playoffs, where the stakes are obviously much higher, and at right around this time, every team is trying to figure out how, exactly, they're going to be playing when, or if, they get in.

The Mavs are in the middle of that kind of experimenting now. Carlisle has been testing his lineups for the first time since mid-season: he's exchanged Jae Crowder for Wayne Ellington, and back again, and cut superfluous point guards from the rotation, causing Shane Larkin to be sent to the D-League on more than one occasion already. He's been experimenting with the end of game lineups, too, giving Devin Harris some burn to close games.

Some of this rotation change is just spurred on by Devin Harris' return to playing and playing form. Harris already feels like a rotation staple, but his return to the court is still more recent than we Mavs fans might be inclined to think, and -- especially as Harris continues to recover and rediscover his skill set -- Carlisle is just now figuring out what works with this new piece in the system.

Still, "figuring out what works" is exactly what every other coach is trying to do as the playoffs approach. This part of the season is half tinkering and half introspection. Messing with stuff that always should work in theory, and measuring it against how the team has been in more normal conditions, is great; but this part of the season is just as much about taking a hard, long look at the team to see what has worked, what hasn't, and what needs changing.

Fundamentally, then, teams are tinkering because they've hit the point where it's time to trim fat, and they need to figure out what is fat and what isn't.

So, with this week's Statsketball, I intend to help Coach Carlisle with this (because I'm totally qualified) and try to do an end-of-season report on what has been working and what hasn't.

My qualms with Hollinger's playoff odds model are well documented in this space by now, but it nonetheless is still nearly the best playoff odds calculator out there -- despite how dramatically it changes with each fairly transient change in Hollinger's power rankings -- and it's definitely the most popular. So, it doing the Mavericks lip service is no small note. With every 1% increase in odds, the Mavs' league-wide reputation slowly improves, which is probably more important than we give it credit for.

But, also, flawed or no, an 85% chance at the postseason is nothing to shake a stick at, and those odds are close enough to what I found when I last projected the Western Conference playoffs that I'm taking Hollinger's projection really seriously here.
Despite Dallas' astounding ability to royally bungle good things, it's really hard not to get excited at playoff odds set at 85%.
The Magic Number does remind us how close the race is really going to be, unfortunately. While 15 is solid (I mean, out of 15 games, the Mavs can win eight and have the Grizz/Suns lose seven, right? That's not bad!) the Grizzlies' Magic Number is also 15, and the Suns' is 16. Basically, to get back into the playoffs over Dallas, Phoenix only has to win one extra game, or, Dallas only has to lose one unexpectedly. Both are more than probable.
Nothing is set in stone. This really might be the most intense playoff race in recent Mavericks history. Because, you know, there's really nothing that the city of Dallas needs like another close race in one of its sports for a low playoff seed. Again.
It's not like this is news: the Mavericks score a lot. We get it.
It is notable, however, that the Mavericks have not only moved into the top 5 in offensive efficiency -- which they've been orbiting for the last month and a half of so -- but they've climbed all the way into the top three over the last couple of weeks. It's really hard to improve an offense that much that quickly, even if the difference between the third best offense and the fifth best offense in the league is marginal, so that tells you that Carlisle has done something very right, tinkering-wise.
So basically, Dallas has been a deadly, buzzing and whirring offensive machine lately.
The Mavericks have had the best bench units in the league for years. I have friends who are fans of teams all over the league, very few of which are Mavs fans, and most of them have had the impression that Dallas' front office is actually an incredible group of genius wizards. We're hard on the front office here at MMB, and not without reason, but casual Mavericks viewers are usually so glowing about the team's administration because it excels at the kind of deals that net a solid, very talented bench core on a discount. The Smoking Cuban talks about the strength of the Mavericks' bench play this season
Those bench units have typically determined the Mavs' success, and this season is no different. The very bench that seemed really weak at the beginning of the year -- while the team lacked Wright and Harris -- has become once again vital to the Mavs' success.
This is an underrated part of Dallas' culture in general. People talk fairly often about how Rick Carlisle is brilliant at mixing Dirk and other starters into bench lineups to outmaneuver other teams, and also about how the front office is incredible at netting great bench players.
More than either skill individually though, Dallas is carried by the interaction of the front office with Carlisle, in netting the particular kind of role players who will fit well in mixed rotations with the starters. It's probably the entire organization's greatest strength, beyond Dirk, and something that we talk about far too infrequently.
Wowza.
The Mavs have actually tried going to the Harris-Monta-Vince-Dirk-Wright combo at the very end of games, lately.
More often, however, the four man crew of Harris-Vince-Dirk-Wright has started the fourth quarter in various iterations, and coasted to the 8-6 minute mark. It can be on the floor for up to six minutes at a time while a changing crew of Marion, Crowder, and then finally Monta sub through.
If there's really anything to get excited about in this entire article, THIS IS IT. When I talked about Carlisle "tinkering" before, this is exactly what I was talking about. Carlisle has been closing games with Wright more -- or at least playing him for a large part of the fourth quarter -- and has been closing games with Devin Harris-led lineups.
Starting the fourth quarter with this lineup, though, has led to a lot of late rallies and held leads -- two things that the Mavs seem to be incapable of, and in desperate need of. This lineup is found gold, and if this one thing is all that Carlisle gets from tinkering with the end of this season, that's probably fine.
Single lineups can only play for so long each game, but this group is potentially elite. It's hard to put a value on that.

What I'm trying to get at here is that it's really really hard to have a defense as bad as Dallas' is and still win. It's so hard, in fact, that Dallas practically deserves a medal. To have a defense this bad and still be a good team takes a type of skill that's hard to find anywhere, and the Mavericks probably deserve kudos.
It's also not surprising, and probably not worth getting worked up about. I've even noted the exact same thing before -- that the Mavs' defense is so bad that it's almost impossible that they win at all -- with some concern, but it's late enough in the season now that it's not like Dallas is going to suddenly realize that they shouldn't be winning with defense like this, and lose out.
They are who they are: an elite offensive team who can't stay in front of people. C'est la vie.
Point differential is a tricky thing, especially at this point in the season: we say that it's the best predictor of end-of-season success because the correlation between point differential and wins is 77%. However, by now, the season is so far along that using actual wins and percentage of games won is a little more reliable. Point differential isn't really predictive anymore, at this point. 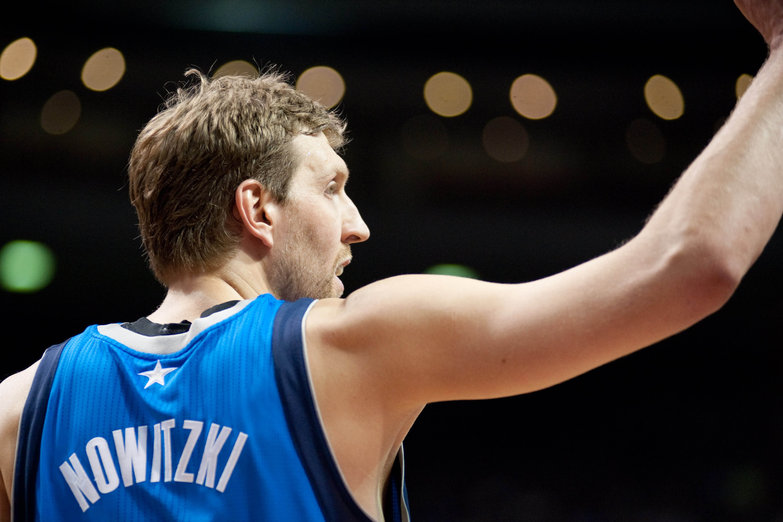 How the rise in a particular brand of analytics is changing how we think about the sport, and making Dirk all the more rare.
It is, however, a good measure of how good teams are, and so it gives Mavs fans a good reason to pause. The Mavs appear to be one of the ten best teams in the league -- a great achievement -- but it's actually unclear from this measure whether Dallas is any better than the Suns or Grizzlies, the two teams fighting them for a playoff spot.
If you're using point differential to predict the playoff picture at the end of the season, then you might as well just flip a coin at this point. It's that close.

We can talk about depth becoming more important in the playoffs, and Dallas' stellar bench production all we want, but the fact remains: getting a team ready for the postseason means trimming fat in the lineup. It means ratcheting up minutes for nine guys, and letting the rest sit and deal with it. It means fewer lineups, and far more starters. So, when your starters are being pretty glaringly beat down -- even on average, not even against only good teams -- that's a pretty bad look.
It gets worse, too, when you take into consideration that it's not just the starters who are getting beat down, it's the top four lineups, three of which include those bench pieces that are supposed to carry this team to success.
In the regular season, it's easy to say, "look, the starters may be a -3, but the bench players are a +7, so the Mavs end up ahead!" In the playoffs, will the Dallas bench players be against such easy opponents, when the Spurs start to sit the likes of Austin Daye and Aaron Baynes in favor of Patty Mills and Boris Diaw; or when the Thunder sit Hasheem Thabeet and play Nick Collison? Will they still be such a huge plus when they're playing 12 minutes instead of 20?
I'm the first guy to point out that there's a lot more to the game of basketball than saying, basically, that X player is better than Y so Z team will win, usually.
Still, if this doesn't make you concerned, then I don't know what will.
Statsketball is a registered trademark