Ranking the rankings, week 20: Mavericks move up after impressive win

With three straight wins, including one over the Thunder, rankers are starting to take the Mavs a little more seriously.

Share All sharing options for: Ranking the rankings, week 20: Mavericks move up after impressive win

Hey sports fans. We are in the home stretch, and boy, is it going to be tight. But the Mavs have been...dare I say rising to the challenge? I don't know if I would say that, because Mavs, but let's see what impartial observers have been saying.

A reminder that these numbers do not reflect games played Monday or Tuesday, including the Mavs' somewhat uninspiring win over the Celtics. To the numbers... 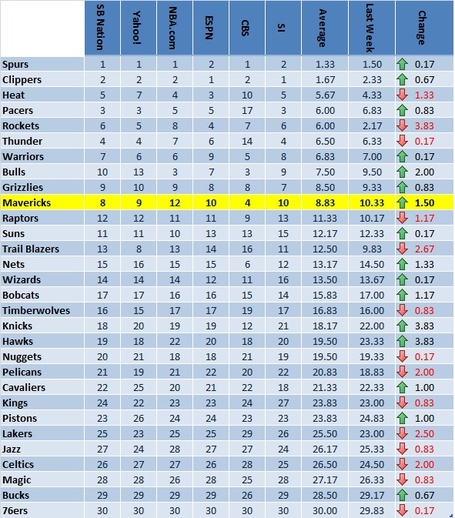 After an easy win in Oklahoma City on Sunday and having played their best five-game defensive stretch (102.2 points allowed per 100 possessions) since before the All-Star break, the Mavs are looking good for one of the last two playoff spots in the West. They play their next eight games at home. Three of their five remaining road games are against the Lakers, Kings and Jazz.

Time for Dirk Nowitzki and Rick Carlisle to take some fresh bows. A reasonable 10-5 finish is suddenly all the Mavs need to record a 50-win season. I thought coming in that 45 wins was their ceiling, but a schedule that seemed so brutal back in November is working in Dallas' favor now.

At this point I want to increase the difficulty setting on Rick Carlisle's coaching career. He's making this look too easy.

The Mavs rank No. 22 in defensive efficiency, but they have been a top-10 unit over the last five games. Recent wins over Oklahoma City and Indiana remind us how dangerous Dallas can be when at full strength and playing well.