My attempt to predict how the Mavericks are likely to fare against their possible first round matchups.

As of the writing of this piece, the Dallas Mavericks are 8th in West, only 1/2 a game ahead of the Phoenix Suns. The Mavs are going into a three game stretch, though, against the Clippers, the Kings, and the Warriors where they could just as easily go 0-3 as 2-1 (after all, remember how poorly the Mavericks match up against the Kings: they could drop every game just as easily as they could surprise somebody).

It's easy to get pessimistic about the Mavericks' playoff odds, but the Mavericks have a fairly average schedule coming up after their rough stretch, and Phoenix has a 4 game stretch coming up that's just as hard as Dallas' is now.

As well, for the last 3 games in the season, all three of the Phoenix-Dallas-Memphis trio play each other, and as long as Dallas doesn't completely fall apart, the whole season will probably come down to the results of those last two games against the Grizzlies and Suns.

At the moment, I'd like to leave Dallas' odds of making the playoffs alone, until we get closer to the time in which Dallas is set to match up against Memphis and Phoenix, and we have a better sense of what Dallas needs to do to make the postseason.

With that in mind, instead of projecting the odds of Dallas making the postseason, I'd like to look at how the Mavericks project to do against all the teams that they are most likely to play in the first round if they succeed in making the playoffs. How many games could Dallas steal against OKC? Against the Clippers? Against San Antonio?

I developed a model to try and project how many games the Mavericks could win in a series against any of their possible first round matchup, and it works as follows.

The two best predictive statistical measures of team success to this point are point differential and Wins Produced, the latter of which is a fascinating statistic that hasn't been covered much in this space. Point Differential has been shown to have a 77% correlation with long term success, but Wins Produced, when calculated before the start of the 2012-2013 season, had an 82.9% correlation with final record for that year.

It is probably worth noting, however, that the preseason predictions for this year from Wages of Wins have been clearly less accurate, but it's hard to know exactly how much so, and it's probably in large part due to the volume of injuries this year.

Wins Produced is the product of the Wages of Wins group, and is a statistic developed to say how many wins each player will contribute to the team, and then how many wins is the team likely to end with, based on research by Hollinger and others that has correlated pure production in points and rebounds and steals into value in terms of wins.

The calculation of Wins Produced is very long and complicated, and if you're interested you'd be better served by reading about it on the Wages of Wins website.

I ended up using Wins Produced - as opposed to Point Differential - to project how the Mavs would fare against their probable first round draws because Wins Produced allowed me to find, first, how each team in each matchup would fare in the playoffs against an "average" 41 win team (both in terms of Wins per 7 Games and in terms of Win%). From there, it was much easier to find out how the two teams would fare against each other than it would have been with Point Differential.

Once I had done all of that, I had essentially found "the odds that X teams beats the Mavericks in any given playoff game." From there, it was easy to calculate the odds that "X playoff team" beats the Mavs in a sweep, or in 5 games, etc. Based on those odds, I came up with my predictions for each possible matchup.

There are some side notes worth pointing out, regarding the model:


It's tempting to think that a playoff matchup against Houston would be favorable to Dallas: Houston is currently the lowest ranked team on this list, and Dallas has done well against Houston this season. That's misleading, though. The Mavs played Houston before the Rockets had gotten fully healthy, and before they'd really hit their stride. 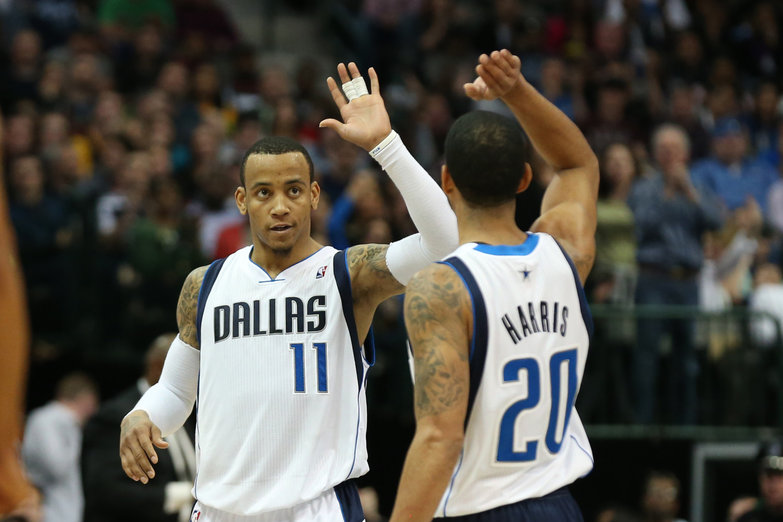 Last week's Statsketball, looking at how Dallas has been doing to end the season

Also, Houston is stocked with extraordinary young talent whose minutes can -- and will -- skyrocket when the postseason comes. Dallas is not so lucky. They lack a surplus of young players whose minutes can ratchet up meaningfully in a month and a half.

Even adding to all of that, Houston is a bad matchup for Dallas in a lot of ways: the Mavericks have absolutely no answers for Dwight, who has been on a tear, and who might be the Rocket's most valuable player. As such, the Mavs did not fare as well in the model as Houston did.

Luckily, the odds are almost nonexistent that these two teams end up having to play each other.

Here are the odds for a possible Houston matchup:

My full prediction is that the Rockets beat the Mavericks in 5 games, but a 6 game series would not be surprising.


This is also an unlikely matchup, but at any rate, the Mavericks have seemed to match up well against the Clippers so far this season. Still, they've mostly played LA while Darren Collison was in place for an injured Chris Paul...and the Mavericks still lost twice in close games. I think, too, that just about every Mavs fan knows how big of a gap there is in talent between Darren Collison and Chris Paul, and CP3 is likely to be at full strength in the playoffs.

When you add on top of that the fact that both DeAndre Jordan and Blake Griffin tend to kill Dallas, it's hard to be optimistic about this matchup.

Here are the odds for a possible LA Clippers matchup:


This projection looked a whole lot crazier before Dallas' overtime win against the Thunder to end the season series having tied with the Thunder at two games each. Suddenly, the Thunder just don't seem quite so omnipotent.

There are a couple reasons, I think, why the model was so kind to Dallas against Oklahoma City: first, the Mavericks match up fairly well against OKC. Even though Dallas hadn't beaten the Thunder in a long time coming into their first win against OKC this season, almost every single game against the Thunder was incredibly close, including several overtime games. Against a team as elite as the Thunder, keeping matches that close tends to be indicative of a favorable matchup.

General matchups aside, though, Wins Produced HATEEEESS Kendrick Perkins, who is likely to get healthy and receive a massive boost in minutes come playoff time, which doesn't help Oklahoma's odds in the playoffs. Westbrook being hurt this season has probably hurt his Wins Produced as well, and if he comes into a playoff series fully healthy, you can kiss the idea of the Mavs stealing two games goodbye.

On the other hand, if Kendrick Perkins does come back just before the playoffs and gets 15 minutes per game, and if Russell Westbrook has a hard time cresting 35 minutes per game and maintain efficiency, it's possible that the Mavs could steal a few games, and even make the series competitive.

Here are the odds for a possible OKC matchup:

My full prediction is that the Thunder should win this one in 6 games, but that literally anything can happen in a series against OKC. If you're a betting man, you probably want to stay away from the books on this one.

The Spurs are just so, so, so good. This is the worst case scenario, by far. The Spurs may actually crush the Mavericks player by player - like, literally crush them, with their bare hands - and drink the blood of every Dallas player who's not Dirk.

Here are the odds for a possible Spurs matchup:

My full prediction is that the Spurs are likely to sweep, but the Mavs taking one game wouldn't be a surprise. If you think that Dallas can win two or more games against San Antonio in the playoffs, then you might actually want to go to the doctor.
I do realize that if I was smart man or a real statistician, I would say that the Mavericks are actually most likely to take one game in a series against San Antonio, but losing a game to Dallas just seems like exactly the kind of thing that San Antonio would never, ever do. The model can't account for the fact that the Spurs handle themselves with a military precision designed entirely to come into a first round series and just take care of business. So, forgive me for deviating from the data a little bit, here.