Ranking the rankings, week 18: Mavericks are this week's big losers

The Mavericks take the biggest tumble of any team in this week's composite rankings.

Share All sharing options for: Ranking the rankings, week 18: Mavericks are this week's big losers

Oooooohhhhhhh boy, y'all. This week's rankings are a little interesting (in a bad way, maybe, for us Mavericks fans.) But it doesn't only apply to the Mavs. For the first time in a long time, there seem to be quite a few teams who rankers don't know what to do with -- or at least, have wildly different opinions on.

Thanks to the Monday and Tuesday days off, for once these rankings don't come with a caveat for the Mavs (though they don't reflect games played by other teams on Monday or Tuesday). Here we go... 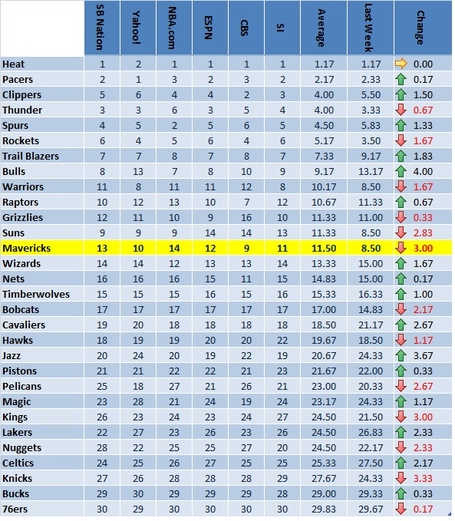 Vince Carter has scored 15-plus in five straight games (shooting 18-for-35 from 3-point range) and the Mavs had a nice little run against bad teams. But their defense helped the Knicks make things interesting on Monday and couldn't stop the #fullsquad Spurs on Sunday. It's now allowed almost 113 points per 100 possessions in 19 games against the top nine teams in the West.

Dirk Nowitzki has a real shot to become just the third player ever, along with Larry Bird (two) and Steve Nash (four), to post multiple 50-40-90 seasons. He'd give it all up, of course, for a ticket to, say, at least Round 2 of the playoffs. At the moment? His Mavs still aren't sure they'll even get there.

You want that playoff spot, you're going to have to pry it out of their cold, lotto hands.