Inside of the Moment: Vince Carter's game-winning 3-pointer

The 1.7 seconds might as well have been an eternity. Take a detailed look at the minutes before and after Carter beat the Spurs on a buzzer-beating shot.

Share All sharing options for: Inside of the Moment: Vince Carter's game-winning 3-pointer

Act I: The huddle

The American Airlines Center had been roaring with support of the Mavericks all night in what might have been the loudest game of the year, but it was hushed now. Manu Ginobili had just sliced into the lane and hit a hanging bank shot that spun around the rim twice before dropping in, giving the Spurs a late lead that brought the Dallas crowd's cheers and high fives to a nervous halt.

The Mavericks trailed by two points and, with 1.7 seconds left on the game clock, were close to trailing 2-1 in the seven-game series. But it wasn't the first time this team faced this situation.

On Dec. 7, Monta Ellis curled around a couple of picks to hit a buzzer-beating jumper in a 108-106 win against Portland. It was nearly the same situation -- in that game, 1.9 seconds remained on the clock. Naturally, this was the play call Carlisle called in the huddle.

But Gregg Popovich was across from him, who Carlisle had called "coach of the century" just days earlier when it was announced Pop was the winner of the 2014 Coach of the Year Award. He knew Monta had beat the Blazers on that play.

Even recently, Pop had been reminded. With 1.1 seconds on the clock in the Mavericks season finale against Memphis on April 16, the Mavericks trailed by a point in overtime. Carlisle went to the same play and although Monta's shot clanged off the back iron, it was a wide open look. Pop had watched that game, too.

Suddenly, it became a game of "he knows I know that he knows," and Carlisle needed a counter. In the NBA, the third time isn't the charm. Nothing works three times, especially not an end-of-the-game play.

The rest of the play: after Monta flares up towards half court, Dirk Nowitzki sets a tiny pick on Vince Carter's man and then runs to 3-point line while Vince slips to the corner.

Knowing how the Spurs would defend the play, Carlisle had a feeling which one of the three options would be open.

"Get ready," he told Vince in the huddle. "It's going to be there. You're going to knock down this shot."

One more quick reminder: "Any pump fake is going to have to be quick." The buzzer sounded to signal the end of the timeout. The Mavericks needed to be on the court.

As Carter walked to his spot, he couldn't help but flash back to that moment in the 2001 Eastern Conference Finals, when he missed a potentially game-winning jumper at the buzzer against the 76ers in Game 7.

"Hey, let's make this one," he thought to himself. 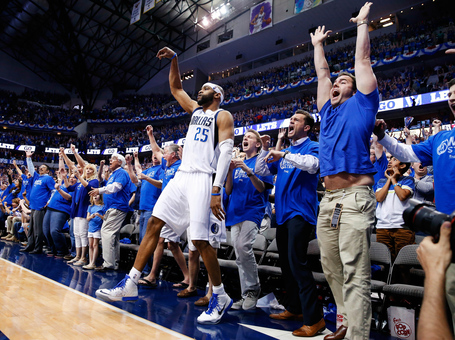 The Mavericks set up just like they had in Portland and in Memphis. For the third time this season, Jose Calderon grabbed the ball on the sideline and slapped it to start the play.

Moments earlier, Popovich had tried to substitute Cory Joseph out of the game -- but couldn't, because it wasn't the Spurs possession. So instead, Joseph ended up on the inbound pass, guarding Calderon.

As Ellis flared up, Calderon stared him down and threw a simple pass fake. Tim Duncan was already moving up and Ellis wouldn't have had any real shot, but Joseph didn't know that. He shifted his feet towards Ellis -- away from the corner -- and upon seeing the fake, jumped in the air, completely taking himself out of position for the play that was about to happen.

"They took a timeout trying to figure out how to guard Monta, so we figured it might not be there," Carter said afterwards. "Our second and third options, we wanted to make sure we were ready."

Like Carlisle had predicted, Carter had a little space as he swung into the corner. Calderon's pass hit him in the palm of his outstretched hand and the clean catch allowed Carter to turn and square up to the basket -- and in one small but crucial detail, on the toes of his feet.

Later, photos would show that had Carter planted his heel, it would have landed out of bounds. Carter said it wasn't something that went through his mind at the time, but years ago, he was coached that in that corner, "you don't have much room so you stay on your toes."

Manu Ginobili, pursuing him, saw Carter start on his mechanics and leaped into the air, flying high above the one-time NBA Slam Dunk champion. But Carter didn't shoot, not yet.

"Manu had already jumped in the air so he helped me out," he said. "If he stutter steps and then jumps in the air, it makes it a tougher shot."

He pumped the ball up -- heeding Carlisle's advice in the huddle to keep it quick -- and let Manu fly by, out of the picture. Only then did he launch into the air, almost like he was casually going up for a warm-up jumper after practice.

The buzzer sounded with the ball halfway to the basket, but it didn't matter. The shot flew true, rippling the net without even grazing a part of the rim and dropping to the floor. Nobody heard it bounce, though. It was much too loud for that. 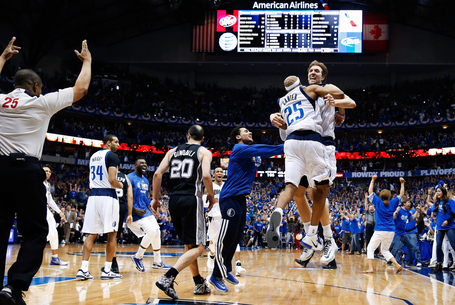 Nowitzki made it above the 3-point line before he turned and looked back at Vince's release. He was also the first one there to celebrate with a soaring chest bump that impressed even the high-flying Carter.

"He got up, and he put a little distance to it," Carter said. "I was shocked."

Dirk wasn't quite sure what he wanted to do in celebration: "I wanted to rip him down, I wanted to jump on him and just, you know...I knew it was in time."

Ellis, Shawn Marion, rookie Shane Larkin and equipment manager Al Whitley joined the celebration seconds later, followed by the rest of the Mavericks bench. Oddly, two of the players actually on the court for the final play were nowhere to be found in the dogpile.

After seeing the shot go in, Calderon took off running -- towards the opposite basket.

"I ran to celebrate, but I realized I was by myself on the other side," he said. "I realized everyone was celebrating under the basket. I had to turn around."

The other was Brandan Wright, who was injured when Monta beat the Blazers in December but on Saturday took DeJuan Blair's place on the "2 seconds or less" play.

Several dozen photos depict the emotional seconds after the basket, and surprisingly, Wright is seen walking with a solemn look on his face.

"I was in a daze a little bit," he told Mavs Moneyball at practice on Sunday. "At first, I was worried he didn't get it off, and then it kind of hit me."

With a direct angle at the corner 3-pointer Vince launched, things went into slow motion for Wright. As his teammates wildly ran to Vince, he was momentarily frozen in his spot. He and Calderon still joined the celebration, but it just was a little bit after the others.

The referees double checked to make sure the shot came in time. It only took one look at the monitor, and the Mavericks players and staff ran off the court in jubilation. Fans all over the American Airlines Center continued to shriek with excitement, high fiving and hugging random strangers, bonding over only a shared Mavericks fandom.

"It was as loud as I'd ever heard the building," Dirk said.

Normally, media would already start crowding around Vince as he dressed after the game. But since it was the playoffs and a press conference was set up, he buttoned his three-piece suit in peaceful solitude.

Questions started as soon as he settled into his chair in Interview Room 1. "Vince, that's the same exact shot you took in the playoff series--" started a reporter.

"-- you told me you practice that shot every day," the reporter continued.

In some ways, this shot was redemption. "That's why Vince is a Hall of Fame player," Mark Cuban said afterwards.

But while the sins of the past can be forgiven, they're not always forgotten.

Will the date "April 26, 2014" be ingrained in Carter's memory like his miss in the ECF? "Probably not, to be honest with you," he said. "It's a great moment, but the [missed shot] one of those painful moments you tend not to forget."

"Maybe come back next year, ask, 'Hey, do you remember this date,' I might forget. But I'll never forget that one."