Brandan Wright is still a badass

Considering there has been a drop in enthusiasm towards him as the season has gone on, here's a friendly reminder that Brandan Wright is still awesome.

Share All sharing options for: Brandan Wright is still a badass

It seems like Mavs fandom has cooled quite a bit on Brandan Wright, and probably reasonably so.

He's an exhilarating, excellent player, but he's been more limited in his offensive capacities than we thought he would be going into the season. He's shown off far less mastery in the "dead zone" (~10 feet from the basket), where difficult floaters rule, and he has shot far fewer 12-foot jumpers, even if he's still excellent at dunking.

Similarly, despite some encouraging data regarding his defensive impact that spurred a lot of optimism about his potential role during the last offseason and the beginning of this season, he keeps making some pretty fundamental defensive mistakes. Those make it hard to give him a ton of minutes in each game.

For example, he botched this coverage against Golden State recently in a pretty typical way, for him: 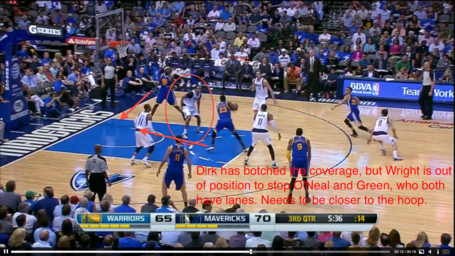 Admittedly, this is a hard rotation. Monta can't help any farther than he already is for fear of leaving Klay Thompson open on the wing, and Dirk is in total nowhere land because he had to over-help on Steph Curry to cover up for Calderon. As a result, Wright is left to deal with O'Neal and Green by himself.

Wright is usually good at contesting shots at the rim, but he has the unfortunate tendency to not actually be at the rim when a shot goes up there.

As a result, Draymond Green gets a fairly easy layup when Wright doesn't move back to contest him at the rim. O'Neal, also, could have gotten an easy dunk on a dump off. By trying to cover both O'Neal and Green from the angle he has chosen, Wright cannot move with Green to contest a shot at the rim, for fear of a dump off to O'Neal.

This kind of play has really been at the heart of the chilled enthusiasm towards Brandan, I think.

He's very good, but he just seems to be performing at a level a tad below where we know he's capable of playing: he stopped taking 12 footers and floaters, and thus doesn't stretch the defense as much as we wanted. He defends well at the rim but rotates poorly. He does what he does incredibly well, but he doesn't do quite as much as we thought he would.

That may all be true, but it shouldn't distract us from the fact that Brandan Wright is still very, very awesome.

He has, by far, made the biggest impact on the court of all big men not named Dirk, when compared to how the Mavs perform with him off the floor.

Look, Wright is pretty clearly not Tyson Chandler. He might not even ever be a starting-caliber center, unless he learns how to rotate on defense in a way that maximizes his defensive strengths.

Still, an important thing to remember is that Wright knows that he's not Tyson Chandler, and does what he can to maximize his utility to the team, given what he knows that he can and can't do. Our own AndyTobo has said before that Wright is brilliant in part because he understands his strengths and weaknesses and he plays entirely to them, and I think that there's a lot of truth in that.

As a counter example, Dalembert is infuriating because he keeps trying to play beyond his means or skillset. Dalembert keeps trying to do things like fire 18 foot jumpshots and catch a pass while on the run. Seriously, old "Pizza Hands" Dalembert is probably completely incapable of catching anything thrown to him while rolling to the rim.

After a couple plays in a row of this:

Getting to watch someone do something like this is really refreshing.

Isn't someone who can actually catch a basketball and score with it (with a 75 percent success rate around the rim, by the way), really worth getting incredibly excited about, even if the team can only sustain this attack for 20 minutes in a game?

I mean, for god's sake, look at his shot chart: 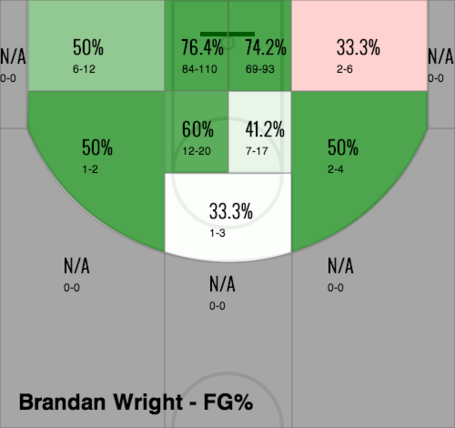 He's actually shooting above 75 percent at the rim! That is an actual thing he's doing!

It's such an easy critique to say that Wright may be shooting 75 percent at the rim, but that he's doing so entirely on dunks, and of course his percentage would be so high if he's only dunking the ball.

Why is that a bad thing, though? Wright's sky-high percentage means that he only shoots when he's certain that he's going to score, and in the cases where he won't, he'll pass the ball to someone who is likely to score. That just makes Wright a smart, valuable offensive player.

That's the crux of why Brandan Wright is so awesome: he seems to always make the right decision. If he can dunk it, he will. If he can get a good shot in the lane, he'll take it. If he's WIDE open on a midrange jumper, he'll take that, too. Otherwise, he knows not to waste a possession on a shot he's more likely to miss than make.

In some ways, I think we underrate the ability to make sure that a possession doesn't go to waste. Possessions are really, really valuable, even if there are a lot of them, and Wright is a player who can maximize the utility that the team gets out of every trip on offense just be being there and making the right move.

Twenty minutes worth of a player who can consistently maximize offensive potential is huge. Ninety percent of teams around the league would kill for a player who could do that.

So, even if he's not as exciting as you wanted him to be, don't sleep on Brandan Wright. He's still a badass.