Looking at the last four games of the season and what each one means to the Mavericks' season.

Share All sharing options for: Statsketball: The Final Playoff Push

After the Maverick's last second win against the Kings on Sunday, Dallas officially only has four games left to play in the season. Yet, they remain firmly part of a battle for the playoffs, this late in the season, that will probably go down to the last game.

The playoff push is also made even more intense by the fact that the last two games of the season are against the Suns and Grizzlies, respectively - the other two teams vying for the final two seeds of the playoffs.

So, with the season on the line and with so few games to go, I decided to do a statistical breakdown of each game, the importance of each, and the overall playoff picture from here until the end. 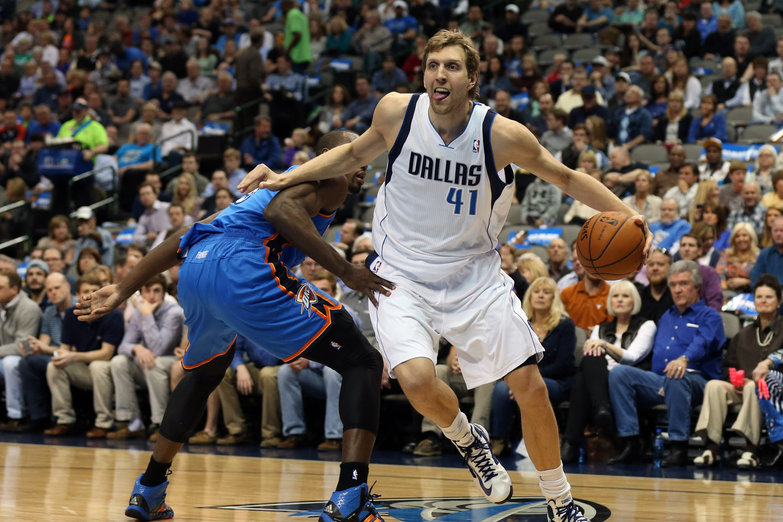 For this, I used a model very similar to the one I used in the last Statsketball, where I used Wages of Wins' Wins Produced to project how likely any given team is to beat another in any given playoff matchup.

In this case, I adjusted the model to tell me how likely each team was to beat the other in an individual game, rather than in a best-of-seven series. As well, as in the previous edition, I adjusted each player's Wins Produced total to reflect each particular matchup.

For a more in-depth explanation of the model, you can refer back to the prior edition of Statsketball, or you can always reach me on twitter at @HalBrownNBA.

Every game over the next week probably qualifies as a "must-win," but this is probably the second or third most crucial game in the Mavs' season. This, admittedly, seems silly to say about a matchup against the Jazz, but that doesn't make it any less true. It's easily the second most important game of the four games this week.

This game is so important, in large part, because it should be such a gimme win for Dallas. The Mavericks need every win that they can get going forward, and so this is a game that the Mavs absolutely need in order to boost their standing.

That's good, too, because the Mavericks have had the Jazz's number all season. Dallas has struggled against just about every team - good and bad - except, seemingly, the Jazz (and the Bucks and Sixers, I suppose).

It's not surprising, either: Derrick Favors is a defensive monster, but he has to check Dirk, whose skillset is a bit outside of Favors' defensive wheelhouse. Kanter is a good defender too, but he also has to either deal with Dirk or shut down any of the Mavericks' three centers whose impact is fairly marginal.

Gordon Hayward is also excellent, but he's struggled to carry this team, and he'll be checked by the Mavs' only good defenders.

Utah is most feisty when they're up against a team that relies on a fairly traditional frontline, and the Mavs don't. This should be an incredibly favorable matchup.

The 85.6% chance of victory, too, is about as high as single game odds are likely to get since the variance on any individual game is going to be so high. This should be as close to a shoo-in as a game gets. After all, that's why this game is important.

In contrast to the matchup against the Jazz, this game is - by the standards of this week - fairly negligible. It's by far the least winnable of all the games that Dallas has coming up, and frankly, no one expects them to win this one, and probably for good reason.

I've said this before (heck, I said this last edition), but the Spurs are just so, so, so, so good. My model had the Mavericks winning with only 34.7% odds, astoundingly low for a one game calculation, even after I assumed that the Spurs would be resting-ish, and that neither Duncan, Parker, Ginobli, or Kawhi would play more than 25 minutes.

Take that in for a second: assuming that the bench players play for half the game, the Spurs will still beat the Mavericks in 2 out of every 3 games according to the math. That's just ridiculous.

There's always the chance that Popovich just shuts the team down entirely - with the No. 1 seed clinched - and doesn't play the big 3 at all. But the Spurs aren't on a back to back, a fourth-in-five nights, national TV or any kind of situation where Pop is inclined to sit players. He'll probably rest guys to an extent, but don't get your hopes up too much for the full bench experience.

Besides, the Spurs bench would still make it a competitive game.

Luckily, each other team has a game they're also likely to drop: Phoenix also plays the Spurs and the Grizzlies play the Heat. This is one game that the Mavericks can afford to just straight-up lose.

That's a good thing, because they probably will.

This is the most important game that the Mavs have left on the docket, hands down. In a wide majority of the scenarios that can play out for the rest of the season (though there are many such scenarios), if the Mavericks can beat at least the Jazz and the Suns, that should be enough to clinch the playoffs.

This is it. If the Mavs win, they're probably set for the playoffs for sure. If not, then the season either comes down to a last-second do-or-die deathmatch against the Memphis Grizzlies, or a loss could even doom Dallas to another postseason drought in and of itself, depending on how the prior games play out.

So, of course, it turns out that the Mavericks odds of winning the most important game of the season are roughly equivalent to those of flipping a coin. Man. For my sanity, I could really use a little more cushion than 2.7%. But, nope, this whole season is really going to come down to a coin toss.

So, it looks like the whole season could very literally come down to "who wants it more," and Dallas just hasn't been the kind of team that you can rely on consistency from, so that's potentially pretty worrying.

As a side note, it's probably worth noting that while Dallas can clinch a playoff berth with a win here, Phoenix will not necessarily be eliminated by a loss. That's the advantage that Dallas has built with their half game lead over everyone else.

Hopefully, this game will only matter for seeding purposes, and Dallas will have clinched a postseason run by the time they get to Memphis. If not, however, this game is going to be a literal fight to the death between these two teams. It's both team's final game of the season, and if Dallas hasn't clinched a playoff spot, then the 8th seed will end up being determined by this game.

The odds that this game ends up mattering are actually pretty low -- there's only a roughly 20% chance that the Mavericks aren't in the playoffs by this point, but if it does, then it's going to be not just the most important, but also the most exciting game of the season.

The good news, too, is that Dirk plays exponentially better when he's had at least two days of rest between games, and the Mavs have a whopping four days of rest between the Phoenix game and this one. Combine that with the fact that Memphis has historically had some serious problems defending Dirk and there's a lot of room for enthusiasm.

On the other hand, Memphis is probably the grittiest team in the league, and faced with a do-or-die situation, you can count on them putting up a brutal fight. Unfortunately, the Mavericks don't always respond well to that kind of doggedness late in games.

As well, it's historically very difficult to sweep a season series (Mavericks are 3-0, all wins by double digit margins), regardless of matchup, especially against teams of relatively equivalent talent (see: Dallas and Denver, this season). Memphis is going to be coming at Dallas for revenge just as much as they'll be fighting to save their season.

Beyond that, the odds of Dallas winning are basically 50/50, again. This matchup is obviously more favorable than the one with Phoenix, but you really have to hope that Dallas doesn't end up playing this game with their season on the line.

Editor's Note: In order to ensure more time for better models, better writing, and better stats, Statsketball will now appear every other week, rather than weekly.