A horrific offensive season, but in other ways is he finding his place?

J'aenthony Michael Crowder. Ovinton J'anthony Crowder. By this, and other names, the Mavs' most confusing player is known.

Good things happen every time Jae Crowder steps out on the court; it's just not Jae Crowder doing them. That's the Jae story.

Here's some elite level truth about Jaeqen H'ghar Crowder. In the case of this player, it is terrifically easy to make numbers lie. We could say that Jae's 3-point shot was looking pretty good late in the season! Posted a sizzling 52.6% three-point number in March, 41% in February! Our three and D player has arrived!

This would be false. What really happened is that Jae stopped shooting threes, which was for the most part a great decision. It's also the case that early hotness -- and really just three games of hotness -- made it look like he'd become a pretty good 3-point shooter in the off-season, but then he fell off a cliff Wile E. Coyote style and then he mostly stopped shooting and it stayed at the not-horrific 33 percent level. That's right. The burn from his first three games lasted basically the entire year.

You may think I'm not being fair, but I'm being very fair. Your point that he started out and ended pretty hot is invalid because I need you to take a minute and contemplate what kind of numbers you'd have to have to start out the season 13-24 over the first eight games of the season, shoot 52 percent for an entire month (March), and still end up at just 33%. That's how bad it was.

A spicy 10 percent in the month of February. A comparatively brilliant 29 percent in January. It fell every month, from 39 percent in November, to 31 percent, to....I mean bards have composed hymns to Jae's April, where he took 13 shots of all varieties, in 12.5 minutes a game, for eight games, and made....two of them, both in the same game. 0-8 from three, 2-13 from the field, that was his April. So don't even think of coming here with your "he can still develop into a decent offensive blah blah." No one cares. I can't tell the future, but if he does, it'll be a huge upset.

And it's not just that, is it, because I've never seen a basketball player in all my born days who puts up fewer stats of all kinds, across the board, than Jaeyonce. I mean he played 17 minutes a game and grabbed 2.4 boards, made 1.2 assists, got .8 steals and scored five points. I mean, he out-rebounded Devin Harris by .4, got .1 fewer assists a game than DeJuan Blair, tied with Bernard James in blocks per and got .1 fewer steals per game than Jose Calderon. This is what we're talking about. This is Jae Crowder's stat line.

But. Even I have warmed up to Jae. And even I have come to believe that the extraordinarily positive numbers the Mavs rotations put up with President Jae Crowder Garfield in them are not a fluke. We're starting with the assumption that Rick Carlisle knows way more about me than basketball, and we're just going to ride that train. Plus, though I have zero hope for Jae as a 3-point shooter, he actually hit some cutting layups in the playoffs and the scary thing is there is no reason it can't happen again.

As near as we can tell, Jae is always where he is supposed to be, moves well on defense and is, somehow, an overall positive for the Mavs despite everything. He's the worst offensive player I've ever seen, which must mean he's a borderline genius at everything else. And he's cheap! Good for you, Jae.

Where DO we go from here, Jae?  It depends on the Mavs' offseason. If both Vince and Shawn leave and a comet strikes the Earth, it's theoretically possible that Jae could be the starting SF next year. Much more likely is that one of those guys comes back, or that the Mavs sign, say, a broom, and Jae Crowder is once again the backup small forward, averaging 15-20 minutes a game. That broom has mad hops.

I know that the idea of a 3 and D player is dear to everyone's heart, but it really looks like Jae's jumper is hopeless. I gotta be honest, I gave up on it when I went to summer league last year and saw it wasn't any better against comparatively terrible opposition. Then he lit the world on fire in the first three games and I almost imagined having hope, but then he lit the shot itself on fire and etc.

However, impact defense isn't limited to guys who can hit the three. Jae has drawn a lot of comparisons to Tony Allen, although at this point he's not nearly the same impact defender. Tony, who shot a Jae-like 23 percent from three this season, somehow managed 49% from the floor, and that's where I see Jae being able to contribute on the offensive end. They even have remarkably similar shot charts.

Here you can see Tony: 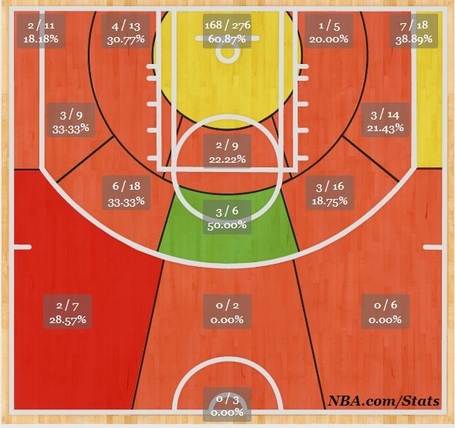 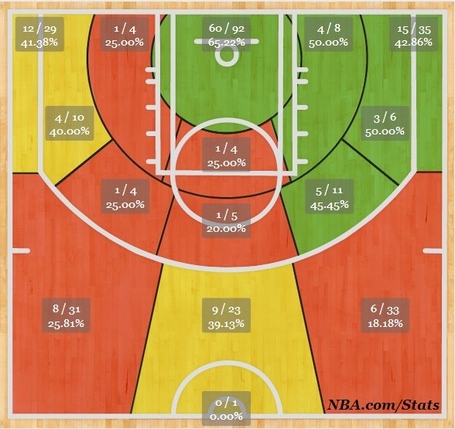 As you can see, Tony's has even more red than Jae's does, but he got nearly 50 percent shooting out of it. And that's what Jae -- who also shot 5 percent better than Tony at the rim -- needs to learn how to do. I think he can. He already began to show real offensive restraint this season, which shows he's a smart player, aware of his limitations. If he can find a way to get to the rim more often, he won't be a complete disaster on that side of the ball and the Mavs might really have something.

Here's a song that was written about Jae Crowder in the 80s:

Here's what we wrote about Crowder this season:

Hal Brown took on the question that raged in the heart of Mavs bloggers all season: Is Jae Crowder Good?

Myself and Josh Bowe went a few rounds on Crowder mid-season, on what his suddenly limited playing time meant.

Josh Bowe heaped praise on Crowder's minutes in Game 1's loss to the Spurs, wondering if he should have played even more.