Five Out Offense: The Conference Finals are set, but watch the Wiz

Also: Dirk is clutch, the Mavericks had a good decade and a hearty handshake to new college graduate Jason Terry.

Share All sharing options for: Five Out Offense: The Conference Finals are set, but watch the Wiz

1. CONFERENCE FINALS HAVE ARRIVED: Both the Wizards and the Clippers fell in Game 6, meaning both NBA Conference Finals are going to be two rather anticlimatic No. 1 vs. No. 2 battle. It's been a little while.

The first game will start on Sunday, May 18, as the Pacers host the Heat at 2:30 p.m. CDT on ABC. Oklahoma City at San Antonio will be on Monday night.

2. WATCH THE WIZ THIS OFFSEASON: Of the two teams eliminated last night, Washington is more interesting to the Mavericks despite being in the Eastern Conference because of their two free agents this summer, Marcin Gortat and Trevor Ariza.

The Wizards have a lot of different options -- this Zach Lowe article does a fantastic job breaking bad draft picks, Ariza's importance to the team's defense, how the Wiz could make a run Carmelo Anthony or Chris Bosh. Of course, he also says that most league executives expect Ariza and Gortat to resign with Washington. It's definitely the safe move.

But if either of those free agents decide to look elsewhere this summer, Dallas will have some interest. I'm wary of Ariza -- his 40.7 3-point percentage was a career-high and inflated by his 180 corner 3-pointers attempted this season (second most in the league to Wes Matthews), something he couldn't replicate in the Dallas offense that doesn't emphasize the shot. However, if there's anyway to bring Gortat to the Big D, please, let me know immediately.

3. DIRK STAYS CLUTCH: Like we had any doubts. According to this fun video by ESPN TrueHoop's Tom Haberstroh, only two current players have a better PER than Chris Paul in clutch situations. Wanna guess who's no. 1? 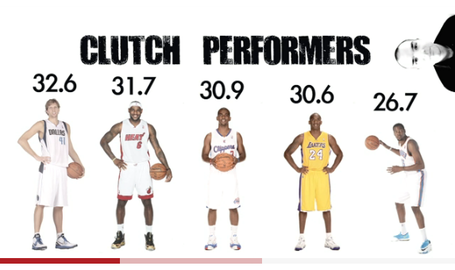 4. MAVS HAD A PRETTY DECENT DECADE: In 2005-14, the Mavericks have the fifth-most playoff wins in the league.

5. CONGRATULATIONS TO THE JET: He went back and graduated college from Arizona after 15 years, and deserves the biggest kudos.

Man 15yrs but through hard work, dedication,family support, and GODs blessing I am a College graduate #BearDown pic.twitter.com/c7A9qSeSpM