Statsketball: The Wings of Free Agency

The Mavericks' season is over, and so Statsketball is back. This week, I'm looking at the statistical profile of the biggest free agent candidates, and in particular, the wing players the Mavericks might be interested in.

Share All sharing options for: Statsketball: The Wings of Free Agency

This year's playoffs aren't over for everybody – and boy, have they been incredible – but they are over for the Mavericks, and it's about time now to start looking ahead to the draft and, in particular, to free agency to start seeing how the Mavericks can improve their roster even more going into the 2014-2015 NBA season.

Unfortunately, the free agent class of 2014 is less than impressive. Barring the Heat's entire Big Three opting out of their contracts and acting as free agents this offseason – which won't happen, probably – then easily the biggest name on the market is Carmelo Anthony, whose choices at the moment seem fairly limited to New York, Chicago and Houston, as if Dallas even wanted him in the first place, which they haven't indicated that they do.

So, between available candidates and reduced cap space, the Mavericks' prime free agency candidates are suddenly much less exciting than the "plan powder" pursuits of the last few years, as Dallas is forced to choose between candidates like Luol Deng, Trevor Ariza, and Marcin Gortat instead of Dwight Howard and Andre Igoudala.

Nonetheless, there are a few good role-player options on the market this offseason to fill positions of need for Dallas.

For one, the Mavericks probably need to get a real, starting-caliber center, preferably with defensive acumen (and, no offense to him, but Sam "Pizza Hands" Dalembert just isn't quite that), a starting wing to replace the likely-leaving Shawn Marion – again, who probably can actually defend the ball – and another reserve or starting guard who can keep the Jose-Monta guard combo from being a complete defensive disaster.

So, in preparation for this season's free agency, I'm going to look at the statistical profiles of all the free agents who fit these positions of need for the Mavericks. As a general rule, since we don't yet know for sure who is opting out or not, I'm only going to break down unrestricted free agents for the time being.

I'm breaking this into a three part series, with each position being discussed each week. This week, we're looking at the available wing players.

It's been a running joke among the Mavs Moneyball staff that Deng is actually the only free agent on the market, because he's such a Mavs-y free agent acquisition that it's almost bound to happen. He's a fairly decent (though probably overrated) 3-point shooter who can defend well and has a quirky offensive skill set for a fairly reasonable price. He's like Marion, but much better offensively, if less versatile defensively.

Then, despite lots of concerns about his longevity thanks to the abuse from Tom Thibodeau, he is still only 29, and despite his relatively large 24,000 minutes logged, that's still nowhere near the mileage of Marion or Carter who are still contributing well. He's not exactly a broken down car, yet.

Plus, he can contribute in almost all of the most important ways that the Mavs need him to. He can score from 3 (as a spot up floor spacing guy) and from the post, can occasionally score off the dribble, and can play and effectively defend both the wing and power forward position.

His one major deficiency when it comes to his possible role is his limitation in defending guard positions, which would make it absolutely essential that the Mavericks pick up a defensive guard to shore up the defense.

Deng isn't as flexible a defender as Marion, but he's better at what he does:

Marion allowed 92 points per 100 possessions when he was involved in a defensive play, per synergy sports: not a bad number - but also not anywhere near the best (though it's also probably influenced by how bad the Mavericks were in general). Deng allowed 88 points per 100 possessions, though, a much better margin over a whole season. There are about 100 players between Deng's level of defense and Marion's. 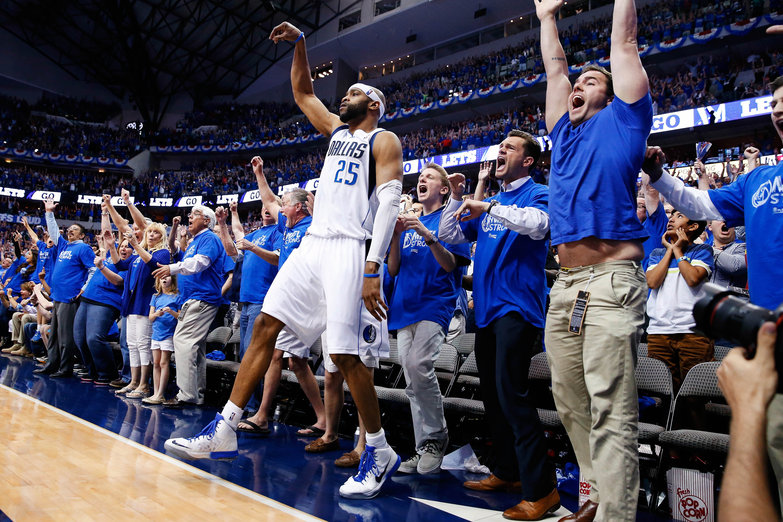 In which the Mavericks did many cool things

On the other hand, Marion spent much more time defending players posting up, though Deng did only allow an incredible 67 points per 100 possessions on post-ups, even if it is a low sample size.

Deng won't be able to keep up with smaller players like Shawn Marion, but he will defend the wings and big players even more effectively than Marion has, which is a non-negligible revelation.

It might be worth noting, though, that Cleveland's defense was not actually any better with Deng on the floor than off, but that was also true of Dallas and Marion this year, so it might not be a relevant point; co-linearity can create problems this way.

Deng has not shot above league average from 3 for two years now. Last year, he shot 32% from 3, and this year, he shot 30 percent from 3. A big part of me would like to believe that with competent ball handlers like Jose and Monta, and with space absorbers like Dirk, Deng will have more space to shoot the 3-pointer, improving his percentage. This could be the case, too.

Unfortunately, in Cleveland he only shot 38% on spot up attempts: not a bad number overall, but spot up shooters should be able to hit at a much higher rate than that, and even the Mavericks can't limit his attempts to just spot ups, especially if they want to improve the spacing.

For Deng to be really useful on offense (even if he is better offensively in just about every way than Marion, per Synergy) he needs to hit threes at a better rate than he has, and it's unclear from the data whether he can do that.

Unfortunately, the shot chart isn't encouraging either. He wasn't good from 3 in almost any of the places that he really needed to be, particularly in the corners: 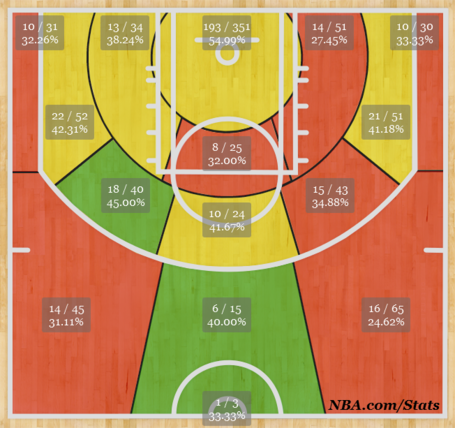 If Deng can't figure out his shot with the Mavs, he's a lot less valuable than we might be inclined to think.

Though, it's also true that he'd probably have to go from being a no. 1 or 2 offensive option the last few years to being the no. 3 or 4, a big drop that could both improve his shooting percentages and make him a valuable piece with his scoring off the dribble.

Ariza has exploded lately as the ideal 3-and-D player. Unfortunately, he's also likely to draw some pretty big money for that type of asset this offseason as a result of his play for the Wizards, and when looking at a bill like that you do have to wonder if his percentages this season are not a function of him being in a contract season and of his particular situation with Washington.

Ariza is the defensive antithesis to Deng, but he might actually be the best defensive option

What's particularly interesting about Ariza is that, while Deng is too slow to guard smaller players, Ariza is too small to effectively guard post players. Ariza's mark as a post player, especially relative to his defensive prowess elsewhere, is almost embarrassing: Ariza allowed 117 points per 100 possessions, good for a paltry 282nd in the league.

Ariza may actually be the best defensive option

Ariza is lanky and long, allowing him to move quickly and bother passing lanes.

Similarly, he was excellent at stopping hand off plays and keeping up with players running around off-ball screens, the former of which neither Marion or Deng is good at the, the latter of which he's still better than both.

Ariza's also better at closing out on and bothering spot up shooters by a wide margin, which is important, as that's a particular weakness for these Mavs.

As of last season, Ariza was actually a better defender than Deng and Marion, then, but he won't be able to bang with the bigs the way both Deng and Marion can.

As far as I'm concerned, though, the ability to keep up with and bother guards is far more essential to the Mavs going forward than being able to bang in the post. Post play has been proven to be fairly inefficient on the whole, for one, unless the post-up player is someone like Al Jefferson.

On the other hand, being incapable of stopping guards was the Mavs' kryptonite all season. When guards can penetrate at will, that opens up the floor for everyone else to score, which is a fairly fundamental defensive issue. If Ariza can contribute meaningfully to cutting that down, then the Mavericks' defense will be worlds better.

Ariza's shooting this season was probably fluky, but also maybe not

If you look at Ariza's 3 point shooting from year to year, when you see his percentages this year you would have to be absolutely and completely insane to not be skeptical: Ariza shot 40.7% from 3 this season after not shooting above 33% for for seven straight years.

On the other hand, there's been a distinct improvement in his shooting from year to year to year: his first three years, he shot sub-30%, for a few years after that he shot right around 33%, last season he shot 37%, and then this year he shot 40%.

There's a fairly consistent progressive improvement that you ignore at your own peril, but that improvement has been pretty excessively dramatic in the last 2 years.

It's also tempting to attribute his improved shooting to an increased amount of corner 3 attempts – or attempts from the shortest part of the 3 point line – as a result of his move from New Orleans to Washington, a team that has led the league in corner 3 attempts basically since John Wall got drafted.

Even that isn't an entirely fair assessment of his shooting, though. Look at his shot chart this year, he's shooting well from the entirety of the 3-point line: 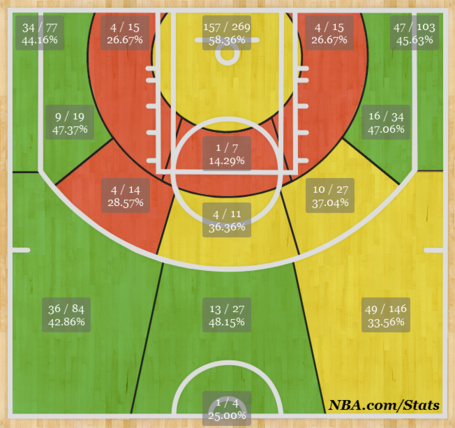 Then compare that to Marion's from last year: 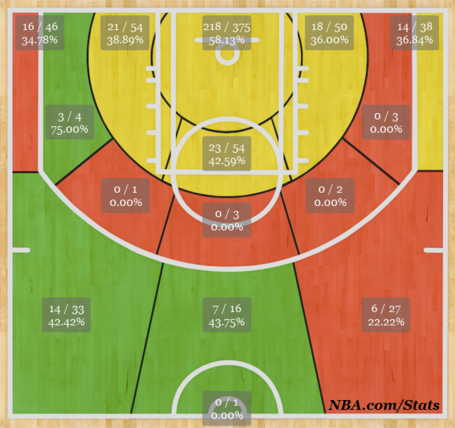 Look: even if Ariza's 3-point shooting is fluky for a contract year, how far is his 3-point shooting going to realistically drop? Even if he becomes a 34 percent shooter from everywhere above the break but stays a 43 percent shooter or better from the corners, he has a lot of value. Given his defense, even if he can shoot passably that's an asset.

But remember, too, that the Mavs tried to space the court a lot by running Marion to the corners, and defenses didn't respect him more often than not, apparently for good reason (35 percent from the corners? Come on). But if a 45 percent shooter from the corners is spotting up there, defenses are going to be much more stretched than they have been.

Besides, the Mavs do have plenty of plays in their wheelhouse designed to produce looks from the corner. Imagine the Mavericks running this play for Ariza, instead of Marion:

Ariza can't do as many things as well as Deng can, but he is a good shooter, and that may be all that Dallas needs.