In 2012-13, Dirk missed the first 27 games of the season and posted his lowest minutes played per game and points scored per game since his rookie year. Which of course led to the exasperating speculation about whether or not Dirk Diggler had finally lost a step. Never mind that he hadn't had a full training camp since 2010, spent nearly half the season injured or recovering, and (oh yeah) dealing with an almost completely new roster around him.

Fortunately for us all, the 2013-14 season saw the German Wunderkind reestablish himself as the basketball demigod we've all come to adore. Not only was Kaiser von Dunkinslammin invited back for his 12th All-Star appearance, but he did so in style, nearly earning his second entry in the rarefied air of the 50/40/90 club and shooting his way into the NBA's top ten all-time scoring list. Also, look how pretty: 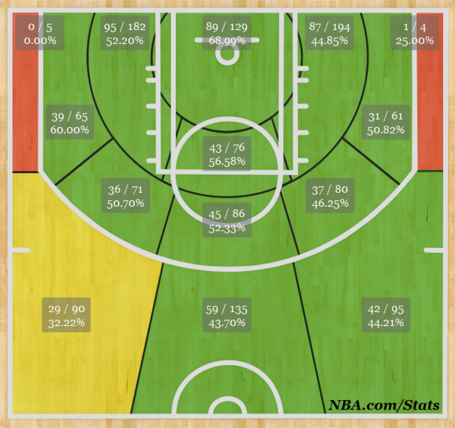 While he may be a few years past his prime, there were many areas this season in which Der Dunkinschnitzel was actually as good as--if not better than--he's ever been. His 49.7% field goal percentage was the second highest of his career. He took more threes this season than he has in over a decade, hitting 39.8% of them. And it was glorious. Seriously, was anything better than seeing the Ghostface Drillah trailing to the top of arch, knowing that those three points might as well already be on the scoreboard?

Now, this isn't to say that the Germanator was magically 30 again. By the end of the season, it became obvious that Dirk was a step slower. Even though he could still get even the best defender to bite on his fakes in the post, he just didn't seem to have the same energy or speed to turn that mistake into the easy layup he used to. Likewise, Dirk's effort on the defensive end was probably as bad as it has been in a long time. He just couldn't seem to contest as hard as he used to, even when he was going after rebounds. The 6.2 rebounds a game Der Dunkinmeister averaged this season was his worst since his rookie year.

Towards the end of the season, it was just so bizarre to see Dirk struggle the way he did. Every now and then a shot that Dirk ALWAYS makes just didn't go down. And it was so confusing. And sad. It was especially rough during the first few games of the San Antonio series. I admit that I doubted Dirk a few times. But he found it again in time to carry the offense through stretches of Games 5 and 6 before the wheels finally fell of in Game 7.

All in all, Dirk maybe began to show his age this season, but still proved capable of being one of the best offensive weapons in the NBA. Honestly, seeing Dirk struggle a bit this season forced me to realize how lucky we've been the past decade and a half to watch this man do his thing. And I plan to enjoy every last minute we have left.

As everyone already knows, Dirk will be a free agent this summer, but in name only. Dirk has been quite earnest about the fact that he is coming back to DFW on a discount. He is eschewing "Kobe money" so that Dallas can sign all the free agents who aren't talented 23-year-old unicorns who can throw up triple-doubles with decent regularity. In all likelihood, this will be Dirk's last or 2nd to last contract, and within the next five years or so, #41 will be hanging in the rafters of the AAC.

Going forward I would expect probably a slow decline over the next few years. Dirk's stats next season will probably be a shade lower than this season's, with a few more stretches where he struggles and a few less flashes of the old spectacular Dirk. He may still make the All-Star Game once or twice more, or he may not. Barring injury, he will definitely move up a few more spots on the all-time scoring list.

As much as we would all love for Dirk to go on destroying NBA competition forever, Mavs fans are going to have to accept that we are watching our hero slowly ride off into the sunset. Hopefully the front office has a couple of more tricks up its sleeve to surround him with enough talent to maybe catch lightning in a bottle for one last championship run in 2014-15 or 2015-16.

But regardless of whether the Mavs ever win another championship, let's all agree that we will savor these last few seasons of Dirk. Because before long, we'll be debating where to put his statue.

Over at Grantland, Brett Koremenos had a fantastic article on Dirk and the unguardable play.

Earlier this season, I talked about how "the narrative" around Dirk has changed over the years.

And finally, one day after Game 7, Hal Brown gave us this excellent long-form article wondering whether this was the last time we would see Dirk and Duncan face off in the NBA playoffs.