Five Out Offense: Mavericks lead the league in cap space

Plus Dirk's annual summer baseball game, Mavs bringing in a player, and more.

Share All sharing options for: Five Out Offense: Mavericks lead the league in cap space

1. ALL THE CAP SPACE BELONGS TO THE MAVS: Our friends over at SLC Dunk take a look at offseason cap space by team. I don't think it's a shock that the Mavericks are at the top. I'm not so sure about the part where they talk about Dallas being a "desirable" destination, considering the free agents who have spurned them over the past few offseasons, but maybe things change with a winning team that now clearly "has it all," no? 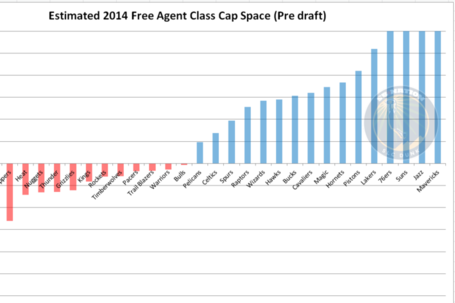 Seems like most of the Mavs will be present, as well as Jason Terry, Michael Young, Vernon Wells and Chandler Parsons. HANDSOME BASEBALL YOU GUYS. Well now I'll DEFINITELY be there. You can follow the lineup announcements @HeroesCelebrity.

3. SOME BACKGROUND ON THE NEW COMMISH: This is from last week, but in case you missed it, Lee Jenkins over at Sports Illustrated had a great long-ish read on Adam Silver (aka, the guy who will be handing out Mark Cuban's fines from here forward). It's worth your time.

4. ALREADY MAKING THE MOST OF THE OFFSEASON: Per Jeff Goodman at ESPN, the Mavs are bringing in Chane Behanan for a workout:

Former Louisville forward Chane Behanan told ESPN he will work out for Dallas Mavericks on June 12.

If you want some background on Behanan, this Bleacher Report profile from February is great.

5. HAVE YOU HAD YOUR FILL OF DIRK TODAY?: Well, if that isn't a rhetorical question, I don't know what is. Check out and vote in our Dirk Game Winners Tournament! Voting on the first round opened yesterday, and we'll be running it over the next couple weeks. What better way to spend your Monday afternoon than lost in Dirk awesomeness? GO. NOW.