Standing in Shadow of Titans, in the View of Specters

Share All sharing options for: Standing in Shadow of Titans, in the View of Specters

These men are titans. In form, they stand above everyone; they impose. In history, and in importance, they stand as giants, as figureheads, as walking history.

These men are ghosts; ghosts of who they were. Who, perhaps, they still are.

For one of, if not the, last time, Dirk Nowitzki and Tim Duncan faced off in the playoffs once again. Though neither had the series of their career, there were glimpses of what we remember.

We see each player's general form, their outline or shade; the shape of them that reminds us of who they are, who they used to be when they were more full - more present. We don't see them like we used to. We can't.

In particular, I remember a moment in Game 3 where Duncan had switched onto Dirk. Dirk isolated Duncan on the left elbow. Dirk spun, faced him up, faked, stepped back and shot. Duncan stuck to Dirk the whole time, like he'd seen a million times before.

Dirk drained the shot, like he had done a million times before.

Chills. It spoke of history, of tradition, of battles fought and won and lost only to be fought won and lost some more.

But those chills only lasted a moment. The awe, the aura of legend and myth that emanated from that single moment, was fleeting - instant. The feeling flashed for only a moment after Dirk shot. It flashed powerfully - overwhelmingly, even - insistent on being felt, only to fade into the backdrop of the continuation of 2014 playoff basketball.

Op/Eds: 1.7 Seconds of Eternity Carlisle is a Wizard Mavs proving they're for real

Still, there's a sense of awe that's impossible not to ascribe to these two people. Titans demand attention. Ghosts demand fascination. These men stand in their own inescapable gravity for every moment that they stood on the court together.

But as much as the fans were held in thrall by the pull of Dirk and Duncan - those grand celestial bodies - the players who were around Dirk and Duncan were in orbit, caught swirling around the impact, the history, and the legend of those two people, but while trying to make a statement of their own.

This series was not won on the back of either player - neither Duncan nor Dirk is that player anymore - but it felt like it should have been. Instead, though, their teammates, guys who in some cases are legends in their own right but not to the same degree, did the job.

These other men - the demigods and mortals to Duncan and Dirk's titanic frames - are the ones who tried to most fundamentally impact the series, impact the future, and find a way to do so while grappling with inescapable shades of the past.

When asked about playing a series with Dirk Nowitzki and Tim Duncan, Brandan Wright stopped for a moment, and took a breath. He stared into the distance.

"Well, it's been a competitive series so far," he started.

The results of these games are inescapable, they're on everyone's minds. Who is or isn't winning the series is obviously as important as the players in the games, if not more so. Dirk and Duncan are incredible, important, but not the end all and be all of the series.

But Wright continued, "They don't have to be playing, they could be sitting at home. They both won championships, won MVPs. They both did the impossible on the court. They just play because they love it, and because they want to win again." 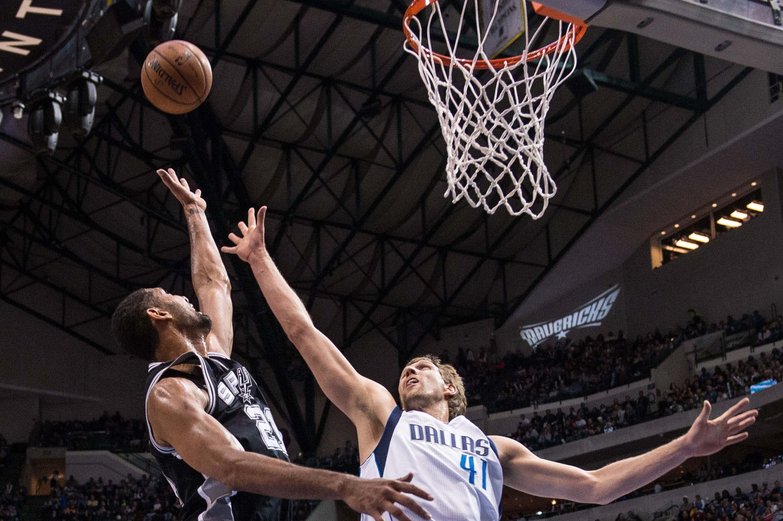 When I asked Jae Crowder about what it was like playing in the playoffs with Dirk and Duncan, though, he didn't even blink. "They're competitors, and these are the playoffs."

Even though Crowder was honestly just trying to give me a non-answer so that I would shut up and go away, his answer was, essentially, the crux of the whole playoff series. Dirk and Duncan are competitors. Famously, legendarily so. The myth of their competition looms large, and is inescapable.

That wasn't the story, though, really. The story was the playoffs themselves.

The story was never "Dirk versus Duncan part 15," the story was always, "What are the matchups like between the two teams, how did Dallas win so many games, who's coaching better," and so on and so forth. The story was about the Mavs-Spurs series itself, and all the things that playoffs entail in general: they're about winners and losers, heroes and villains, about dedication, hard work, insanity, and chaos.

Jae acknowledged that there's something to my implication that playing with Dirk and Duncan - and watching them play each other - was special somehow. But those two and their narrative was so much less pressing, so much less important, than the games themselves.

Wright basically said the same thing, even though it may not seem that way. He went from talking about Dirk and Duncan to saying, "I think we're doing well. We're doing a lot of things right." The story he told ultimately veered away from Dirk and Duncan because they were never the real story. The real story was always about the games, about winning and losing.

Wright and Jae are two of very few players on this Mavericks team who are young enough to have not come in the league with Dirk, or thereabouts, who got consistent playing time, and so they're the only players on the team who might view Dirk with the same kind of reverence reserved for fans. And maybe they do see him that way. But that's not the focus. The focus is the game. Awe can wait.

These men have done the impossible, but that's for another time. We're trying to win, now, he says, in a nutshell.

In the heat of the playoffs, in the middle of the excitement of a series, it's impossible to focus on Dirk and Duncan going at each other again. Why would you? Basketball, as the talking heads are fond of saying, is a team game, and the playoffs are about team performance; about whether or not a team advances.

Dirk and Duncan were not the main story, because they couldn't be. The main story had to be who was playing what type of offense, how the teams adjusted, and who beat who, because that's what basketball is, and that's what the playoffs are.

It brings real, palpable joy to see snapshots, moments frozen in time, of The Big German spinning to shoot on the Big Fundamental. These shots, contests, facedowns, are all ostensibly current and present, and yet they reek indelibly and inseparably of the past. They reek of identical moments - identical snapshots - from years or decades ago.

These moments are of the future, too. They're defined largely by their definitional lack of future, by the probability that these moments will never happen again, and certainly, never with the same charge and import.

Yet, as a corollary, these snapshots that we watch, reflected through the wispy skin of these gigantic specters, are infinite in their future; they are infinite in possibilities that open just at the moment that the traces of these ghosts inevitably fade.

Unseen, but not forgotten.

We don't focus on the mythic struggle repeating itself in front of us because we can see through it, to the future in which this mythic struggle repeats no more. We want to think about that future, imagine it, build up our image of it as brighter and greater than the one to which we are present.

We lose sight, too, of the heroic re-engagement of these two men because the moment to which we are attached is definitionally so much more present in our lives than the past, and we only stop to appreciate the great resonances of that grand history when they become inescapably huge.

Perhaps that's not fair, too. Not fair to the legends who have given us so much. Unfair to the German who's given us something to hold on to, and to love; and even unfair to his rival who has given us so much to resent, to cheer against - who took the role of the villain so that our hero would have so much more context.

Perhaps we should take the time, when we can, to appreciate what we were in the presence of, for maybe the last time.

Perhaps, though, they tore it asunder simply to have it be built anew.