The point guard the Mavs have been dreaming of, who hits the market right when he doesn't fit

Kyle Lowry is entering unrestricted free agency this season coming off of far and away his best season to date, scoring 17.9 points per game with 4.7 rebounds, 7.4 assists, and 1.5 steals with a 20.1 PER and incredible 56.7% true shooting %. Lowry was unquestionably an All-Star caliber player this year.

It's hard to find much to complain about with his game. He's a smart player who carried Toronto's strong offense this year, and who tends to limit his shots, for the most part, to the most efficient locations on the court: beyond the arc and at the rim. He's a great three point shooter, and he's a tenacious, aggressive, and fast player who can quickly and easily slash into the teeth of the defense.

Shot locations (percentages are the percentage of total shots taken from any particular spot on the floor): 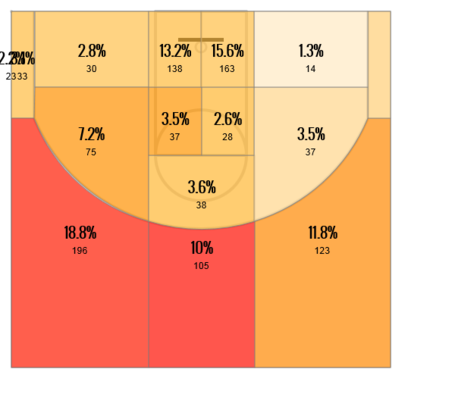 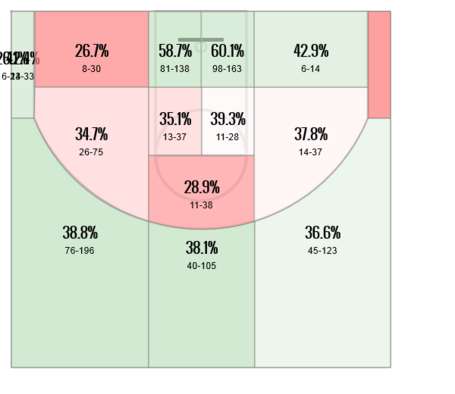 Lowry's three point shooting is an obvious selling point. His ability to be absolutely deadly from behind the arc when either spotting up or pulling up off the dribble is a massive asset.

Lowry is a tenacious defender, too. He has been one of the best point guard defenders in the league since his days in Houston, though he slipped a bit on that side of the floor at times in Toronto due to -- depending on the day -- over-agressiveness or laziness.

And, to top it all off, while Lowry is primarily a score-first point guard, he's a solid passer, and can be really creative with that part of his game from time to time. Lowry's court vision can be limited at times, especially in the pick and roll where he's prone to blind rushing at the rim, but when he's engaged he can be an excellent passer. He's also an above average rebounder for his position and size.

The biggest issues for Lowry are mostly mental. Even after eight seasons in the league, he struggles using his skills in the right ways at the right time.

He has a tendency to get serious tunnel vision when he decides that he needs to score, looking off of players and plays that are much more likely to get a team points, and he often has difficult knowing when to time his attack to best utilize the space on the court and his teammates. Similarly, coming off of a pick, he often makes the wrong decision regarding when to pass, how and when to drive to allow the big man to roll to the rim, and when to use the extra space to shoot. On the other hand, it's hard to argue with the results, even if he can be frustrating to watch at times.

More problematic is that he's been known as a locker room cancer due to his abrasive personality, though this last year a lot of those rumors have been dismissed by Toronto.

As well, it's concerning that he's tantalized people for years with his skill set but didn't really have a break out season until last year at the age of 27.

It would appear that he's finally hit his stride and prime, but there's a concern that last season was contract-year-specific production, and that he'll go back to the "above-average" point guard he was only two seasons ago. Between that, the fact that he'll be ending his next contract on the wrong end of 30 years old, and locker room concerns, there's a real concern about Lowry's intangibles.

As well, Lowry is excellent at getting to the rim -- due to his speed, aggression, and clever ball handling, but his occasional struggles to finish are worrisome at this point in his career.

This fit with the team is the real concern with Lowry, I think, but lots of people have disagreed with me on this. Here's the thing: as a competent shooter, passer, relative young player, and, most importantly, good defender, Lowry is everything that Dallas needs right now. Unfortunately, I don't think he fits because of Jose Calderon.

I know it seems stupid, because Kyle Lowry is a year better and Calderon is a year worse, but Lowry and Calderon have already coexisted on a team and it did not end well for either the players or the team. Neither player got enough minutes, and Lowry in particular suffered majorly, probably due to a blow to the ego.

Maybe Dallas wouldn't make the two duke it out for a roster spot the way Toronto did only one season ago, but can you honestly say that wouldn't be frustrating for Lowry or Caldy, to face the same situation again, even if Dallas is smarter about it? Lowry has always been a sensitive player who bristles at injustices, either real or imagined. He's better for it -- he plays with a perpetual chip on his shoulder -- but whenever he has actual cause to have a chip on his shoulder, his game implodes. This would give him cause for such a chip.

Dallas needs a guard who can defend really badly. Just not this guard, not with the way the team is currently constructed. If they can unload Calderon's contract somehow, great, but I have a hard time imagining that happening.

Besides, the Mavericks already have a headstrong, ball dominant player in Monta Ellis. Having a more passive point guard might be better for the offense anyway, and Lowry is anything but passive.

This contract is likely to be Lowry's big payday, too -- somewhere between $10 and $15 million depending on how ballsy the GMs are this offseason -- and Dallas can't afford that hit without sacrificing talent at positions of greater need in free agency.

Sir Charles in Charge reports that Kyle Lowry and the Heat have mutual interest, provided that Lowry gets a lowballed offer from Toronto and Miami misses out on Carmelo Anthony,

Bleacher Report reports that Masai Ujiri, Toronto's GM, is willing to shell out this offseason to hold on to the phenomenal Kyle Lowry.

Raptors HQ lays out Toronto's probable plan for the offseason, including what portion of their cap that they think Lowry should get.