Jason Smith is an unheralded player but may be a perfect fit with the Mavericks.

Share All sharing options for: Jason Smith Profile: A possible backup for Dirk?

Jason Smith isn't widely known. Playing for a mediocre (if not outright bad) New Orleans team for the past four seasons certainly hasn't helped his notoriety. Nonetheless, Smith has plodded along and put together some decent career numbers. Last season, Smith logged his highest minutes per game average of his career with 26.8. He started the first 24 games of the season and played relatively well. However, Smith would eventually succumb to injury after appearing in just 31 games.

The Pelicans were awash with injuries last season. Smith missed the majority of the season with a right knee injury and underwent surgery to remove loose cartilage in that knee in late January. Before he was sidelined, Smith averaged 9.7 points on 46.5 percent shooting, 5.8 rebounds, and 0.9 blocks per game.

At seven feet tall and 240 pounds, Smith doesn't spend much time battling on the blocks or in the paint. In fact, his scoring percentage within three feet of the rim has declined in the previous two seasons. Instead, Smith likes to operate as a spot up jump shooter from 16 feet to the 3-point line. Now, this isn't the most en vogue place to shoot from. It's basically becoming a no-man's land as teams look for more efficient shots, namely from the corners, at the rim, or above the break. The long two-point shot is borderline analytical heresy and Smith takes 61.3 percent of his shots from this range.

Smith does, however, connect on 47.4 percent of his long twos. The top of the key is his favorite place to shoot with almost 22 percent of his total shot attempts coming from that area. Unfortunately, last season is a small sample size. Though, it does seem that Smith's shot selection is far from a liability. 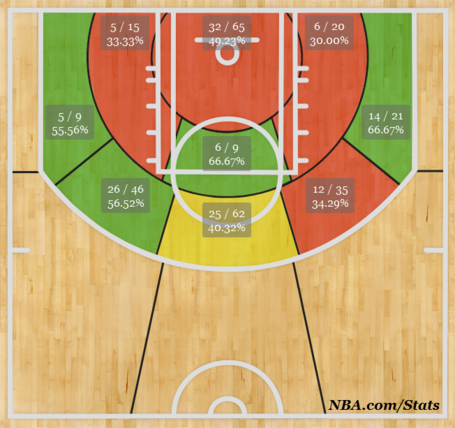 What may prove to be a liability is Smith's defense. He isn't a bad defensive rebounder as he grabbed 18.5 percent of the available defensive boards last season. He's even an alright shot blocker. But he posted a defensive rating of 111 last season and has never had a rating better than 105. Of course, defensive ratings have a lot to do with the overall defense of a team and Anthony Davis seemed to be the only Pelican playing defense last season.

Smith would probably fit perfectly on Dallas. If the Mavs were to sign him, he would fill the role of Dirk Nowitzki's backup. For too long, Shawn Marion has been filling that role, and has been regularly outmatched by true power forwards. With no guarantee that Marion returns next season, Smith seems like a viable option.

While Smith is nowhere near the scorer that Nowitzki is, there is a similarity in their shot selection. Nowitzki does take a number of 3-pointers but the majority of his shots are mid-range and long 2-point jumpers just like Smith. It's feasible, then, that Smith could be worked into the Mavericks' offense with relative ease. This team loves jump shots, especially long ones.

Jason Smith isn't going to send fans rushing into the streets to celebrate if the Mavericks sign him this summer. There's a strong possibility that he stays in New Orleans. Smith, though, is exactly the type of player that the Mavs should be looking at despite last season's injury. He's 28 years old, has six years of NBA experience, is a decent offensive player, and fills a hole on the roster.  Smith isn't a sexy pick but he may be the one the team needs.