Jodie Meeks' ability to connect from long-range will surely make him a coveted asset this summer. Will the Mavericks show any interest in adding another guard to their roster?

Share All sharing options for: Jodie Meeks profile: From downtown

Jodie Meeks is no one's idea of a savior. Thankfully, the Dallas Mavericks don't need one. What Meeks brings to basketball is his ability to score the ball and score at will. This summer, the 26 year old Meeks is an unrestricted free agent. With Dallas facing a number of decisions regarding free agency, the team could take a long look at this proven scorer.

During the 2013-14 season, Meeks played for a historically bad Lakers team that won just 27 games. Yeah, they were that bad. Despite the team's categorically poor play, Meeks was one of the bright spots for L.A. He started 70 of the 77 games he appeared in and logged a career high 33.2 minutes per game. Meeks' durability, as he approaches his fifth year in the league, is certainly an attractive asset. However, it's his shooting that defines him.

Meeks averaged 17 points per 36 minutes on a career best 46.3 percent shooting. He connected on 51.4 percent of his 2-point shots and 40.1 percent of his attempts from behind the arc. Let those numbers sink in. From the free throw line, though, Meeks was slightly disappointing as he only shot 85.7 percent. That was only good enough for the 16th best free throw percentage in the NBA. Hey, you can't win them all. 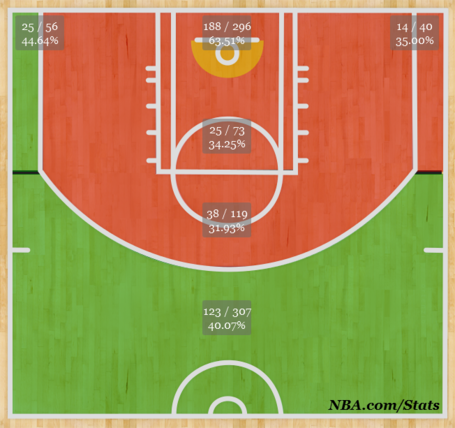 It's his ability to stretch the floor that will interest teams most this summer. Meeks isn't a great defender. His ball handling, though better than it was, still leaves something to be desired. He also isn't that tall at just 6'4". He's far from perfect and the Mavericks already have a bevy of guards.

Dallas will likely let a few players walk this summer. Depending on who those are, Meeks could become a viable option to fill a bench role for the Mavericks. A player with his shooting touch could be right at home in Rick Carlisle's high-powered offense. The thing is, though, do the Mavericks really need another guard?

Meeks is going to get a nice contract this summer. The Lakers may even be the team that gives him one. He would probably like that to happen because players like to live in Los Angeles and play for the Lakers. Those banners hanging from the roof of the Staples Center exude prestige and not the kind you get from playing Call of Duty.

Meeks joining the Mavericks is a long shot at best. We can always dream about the what-ifs that his floor spacing could add but they would just be silly little dreams. However, when a guy drops 42 points on the Thunder on national TV and earns high praise from Doug Collins, the very least the front office can do is put the feelers out there.

Meeks got the nod as the Lakers' most improved player from Silver Screen and Roll.

Dave McMenamin gave Meeks a grade of A- in his season review.

Michael Pina wrote an in-depth look at Meeks for The Classical.