We took a drive out to Frisco for batting practice at Dirk's celebrity game. Here's everything that went on that's worth knowing.

Look at that backwards hat.

How was the birthday party?

Dirk: It was calm since I'm getting close to 40. *laughs* I can't do back-to-back nights anymore so tonight is the big night. Yesterday was quiet. Had some guys over for dinner. I got this sweet karaoke machine for my birthday so I was doing it, I was singing some old school rock songs in the house.

Dirk: Modano gets all the credit for establishing this game in the community for something like 10 years, and then he retired and they were basically going to quit the game, but they approached me whether I wanted to do it and it was a no brainer. Already establish, it's for a great cause, it's fun, it's fun for the fans. The only problem was that it was baseball, and I've never played the sport before. I think I did okay the first two years but it's an amazing event.

Dirk, are you going to hit two home runs or three? 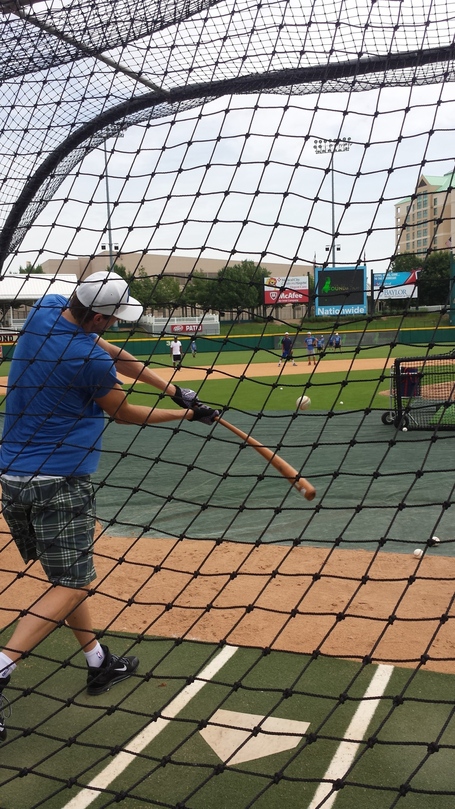 Here's the problem: if I watch the sport on TV, it's easy, I just go up there and smash one. Then I played it for the first time two years ago and it's just so far. I think the farthest I made it was out of the infield, but I've gotten on base a couple of times. What I was telling Michael Young is that I might go leadoff and get on the base somehow with a bunt or a walk, and then he can smash me home. That would be my dream.

But what about the World Cup?

Dirk: Actually no, the funny thing is Germany is playing at 2 tomorrow, and I told them I can't come here before 4:30. I can't leave in the middle of the first half in a tight game. I'm hoping that we're going to wrap it up before everything's done, and I can come out here and be out here.

Devin, you're here. You going to be back?

Harris: Good possibility, yes. [what's it going to take?] I don't know. We'll find out. [how about that deal last year?] That's a good, good starting point. [that's about how many years you're looking for?] Yeah, about.

What about that Spurs series?

Harris: We took them further than any team, but they're world champions for a reason. I think the longer they played, the better they got, and they really got into a rhythm.

How is it interacting with all these athletes?

Harris: It's a blast! We're all challenged with a new sport and we have guys who have extreme athleticism and hand-eye coordination.

People say Dez is a natural at all sports. Who is the most diverse Maverick?

Harris: Vince. Have you seen him throw a quarterback?

Michael Young, you going to be hitting homers?

Young: Noooo, no no no. I haven't hit a ball in a while. I'm not just saying this to be modest, for me, I had to make sure I was on point with everything, I had to hit all the time. If I had a couple of days off, my first ten swings I felt like I was off. This has been a couple of months go. I'm going to go out on a limb and say my first ten swings, they're all going to be ground balls. And that's if I make contact. After that point, I should loosen up a little bit.