As the dust settles from the news that Tyson Chandler and Raymond Felton have been acquired for Shane Larkin, Sam Dalembert, Wayne Ellington, Jose Calderon, and the 34th and 51st picks, I examine what this trade means for Mavs and the offseason.

Share All sharing options for: What the Tyson trade means to the Mavs now and for the rest of free agency

And so acquisition season begins.

In a pre-draft day trade, per ESPN's Marc Stein and Yahoo's Adrian Wojnarowski, the Dallas Mavericks have acquired Tyson Chandler and Raymond Felton for the large haul of Jose Calderon, Samuel Dalembert, Wayne Ellington, Shane Larkin and two second round draft picks in the 34th and 51st picks in tomorrow's 2014 NBA Draft. If the Mavs were looking to make an early splash, they succeeded.

Knee jerk reaction aside (I may have actually done cartwheels), it's probably worth taking some time to walk through what this means for the team, and what it means for their upcoming free agency and the draft that they now may or may not participate in.

It sure seems like the Mavericks are giving up a hell of a lot to get Tyson Chandler back. They're sending off a top 10 shooter in Calderon, an aging bench center in Dalembert, a potential role player in Ellington, a young former 1st rounder in Larkin, and 2 draft picks! AND Dallas taking back Raymond Felton!?

Well, hold on a little minute before you lose your mind.

Ellington has been a bench warmer in two of his last three spots (and the one where he played was freaking Cleveland), and despite a tantalizing skill set there's probably a good reason for that. Larkin was fine, and young, but if he wasn't 20 he would be somewhere between "bad" and "tragic."

He's fine for his age, but plenty of people have talked about how he doesn't have a huge ceiling, and it's doubtful that he'd be better than a good backup, at best. That's not bad, but it's not like the Mavericks are losing a franchise guard, here.

The draft picks, too, are not a big loss. Two second rounders in the hands of the Mavs are basically money that the organization owes to bench seats. Think about it: the Mavericks have only drafted a few players well, and the only good results they've gotten out of a second rounder in the last 17 years is Jae Crowder and Bernard James. That's literally the best possible result from the 34th pick: freaking Crowder or Sarge. That's the best case.

The 51st pick is as close to trash to Dallas as a pick can get. In an average draft, that pick will only turn into a rotation player two percent of the time. That's one in 50, and I don't think Dallas has the scouting or foresight to be the one in that scenario. 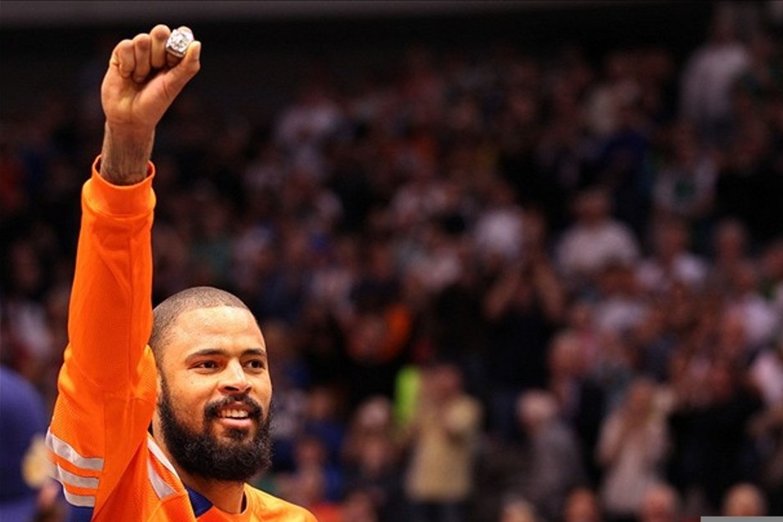 MMB's Article reporting the news of the big trade

I think how you feel about this trade really hinges on how you feel about Jose Calderon. If you look at this trade in a vacuum, then yes, giving up a great floor general and shooter in Calderon, along with a potentially good young player in Larkin, a solid bench player/trade piece in Dalembert and a pick that could turn into someone along the lines of Thanasis Antetekounpo is a bit much for Tyson Chandler -- if the Mavericks are also taking on Felton.

This trade isn't in a vacuum, though, and the Knicks taking on Calderon was closer to a favor for Dallas than it was the Mavericks giving up an asset.

I'm the first person to admit that Calderon was really, really great this season for the Mavericks, much like we all thought he would be. But it's also just an irrefutable truth that a backcourt of Monta Ellis and Jose Calderon is completely untenable in the long-term.

They're just too bad together defensively -- both players can be un-hideably bad at times -- and Calderon is at the age where everyone can reasonably worry that at any given year he might lose the rest of his game, and so his three-year contract is probably a year or two too long to have to deal with that anxiety all the time.

The fact of this matter is that I would be ecstatic to have either Ellis or Calderon, but having both is two more years of backcourt disaster. In taking on Jose's contract, the Knicks have given the Mavericks a blessing: they've opened up the possibility of Dallas signing a defensive point guard to pair more effectively with Monta, which is something that shouldn't be taken lightly.

What this means is that depending on who stays and who goes in Free Agency next season, and how much Dirk takes, the Mavericks can have as much as $33,680,865 in cap space. 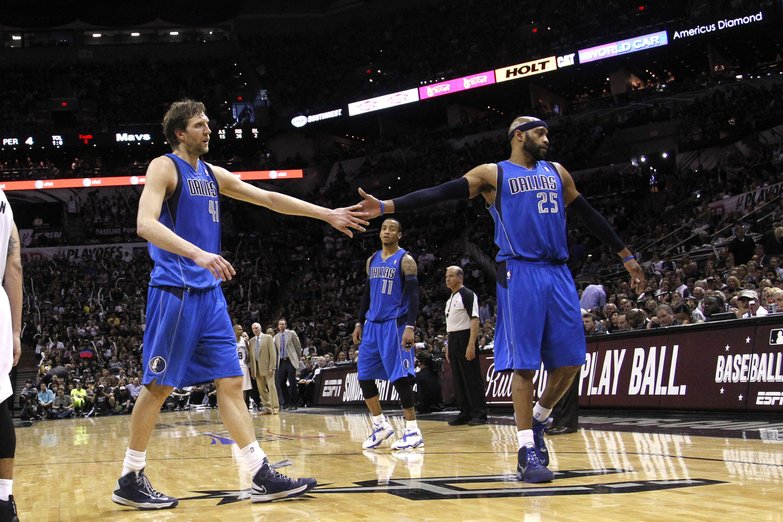 With apologies re: mistaken cap holds by each player's name, a reporting on the Mavericks' cap space for the 2014 offseason

More realistically, they'll have $16,778,214 in cap room, assuming that they re-sign Dirk for $10 million, exercise Jae Crowder's option, re-sign Vince for a small discount and re-sign Devin Harris for about the $3 million he agreed to last season before his toe injury.

That cap value, though, includes the mid-level exception, meaning that Dallas would actually have about $14 million flat to spend. The MLE of $2.7 million has to spent in one sum.

With this much money, Dallas can easily get a Luol Deng, Trevor Ariza, Kyle Lowry, or even maybe Chandler Parsons or Gordon Hayward, with some money to spare. A starting lineup of Lowry-Monta-Marion-Dirk-Chandler is in play, as is a lineup of Harris-Monta-Deng-Dirk-Chandler, with some added bench pieces, both of which are potentially top 10 defensive outfits on top of current strengths, or at least almost top 10.

Max pieces are in play, too, though, if the Mavs are willing to drop Vince, Marion and Jae, and if Dirk is willing to take an extra-large discount. Carmelo and LeBron are going to be the big names that the Mavericks are chasing after, of course, and apparently Dallas is on Melo's short list. I assure you, too, that the Dallas front office is fully aware of this.

Which brings me to another important point: this trade could majorly impact Dallas' ability to attract interesting free agents. The Mavericks gave up Jose Calderon and basically detritus -- as far as other teams and players are concerned -- for recent All Star Tyson Chandler and took on money in the process, which will look much better to prospective free agents than last season's pseudo-budget signing spree (which worked out well, but won't always).

I mean, look, even if you don't like this trade -- and that's not unreasonable -- picking up a player who's perceived to be a defensive stud and is a notoriously great teammate, and being willing to take on money to do so, is a great sign to players. The Carmelo's of the world who wouldn't look one eye at Dallas before might suddenly do a double take in the Maverick's direction (though, probably no more than that).

It's also interesting to wonder if these kinda moves that appeal to players, too, might induce a player like Luol Deng to sign for a little less than he might otherwise, if they can convince him that they'll be able to entice other players by the same rationale.

Ditching Jose for Chandler with all those extra pieces may seem painful, but it has given the front office a ton of possibilities, and a lot of flexibility to play with new roster set-ups that aren't doomed from the outset by the guaranteed failings of a Monta-Jose backcourt.

The cap hit that the Mavericks have taken seems painful, but remember, too; the Mavericks had three major needs coming into this offseason: an upgrade at center, a defensive point guard, and a wing.

The Mavericks filled one such need with potentially a top-five center (and Tyson still is excellent, please don't pretend otherwise) for the equivalent of $4.4 million and that is a steal. The Mavericks may only have $16 million left in space, but that's $16 million to fill only two roster needs now, not three.

Whether or not this is a good trade, though, still ultimately hinges on what the Mavericks choose to do with the flexibility they've bought themselves, here. If the Mavericks use the rest of their space to pick up LeBron, Carmelo, Deng, Lowry, Ariza or some combination of a max player and defensive assets who fill positions of need, Dallas has easily made themselves a good deal here.

Really, the big reason that this trade could work out is not just that they picked up a player of Tyson's caliber, it's that they've also given themselves the resources and flexibility to fill out the rest of the team in a much more balanced way than they built last season's team. If they use that flexibility the way they need to, then they really, really scored today.