Good teams have two things in common: stars, and very good players who provide excellent value per dollar. I look at the best value signings for the Mavericks of this free agency.

Share All sharing options for: Statsketball: Best value free agents for the Mavericks

Really elite teams, on average, have two essential things: stars, and then steals of role-players who are both elite at one or two very specific things and who are worth far more than their contract.

In this edition of Statsketball, while we know that the Mavericks are trying to fill the first part of that equation this offseason with Melo, LeBron, or even Chandler Parsons, I'm particularly interested in the role-players who Dallas will be trying to sign on the side, and what their value might be per dollar.

The Mavericks are in the market specifically for a wing player and a point guard. They have a decent amount of money to sign them, too, and they'll be looking to fill at least one of those positions with a guy who can bring a lot of value to cost.

Dallas, of course, needed a center too, but with the acquisition of Tyson Chandler, the Mavericks filled that position of need at minimal cost to themselves, and they find themselves now in a position to potentially fill both final spots of need with the cap space at hand.

There is a bit of a wrinkle, though, in that the Mavericks can have somewhere between $16 million in cap space and the maximum ($23ish million), depending on who they want to bring back, but those numbers include the roughly $2.7 million mini mid-level exception which has to be spent in one lump sum.

That means that Dallas may actually end up with an awkward amount to spend, where they end up spending the majority of the space on a wing player, and then only have around $3 million or less to fill the guard position.

That's not a bad thing though. The Mavericks need a new, talented, and preferably young, defensive wing player to fill Shawn Marion's minutes. By the end of last season, the Matrix wasn't contributing much to the team anymore besides his still fairly impressive defensive versatility that (admittedly not always successfully) ranged from the 1-5.

If Dallas gets anyone who can contribute meaningfully on both ends to fill that position that's an upgrade, but if they can actually snag someone who is either a star or a defensive stud with a functional offensive game then they've made a serious leap as a team.

On the other hand, the Mavericks as currently constructed can vaguely get away with "point guard by committee." Devin Harris can start and play 25ish minutes per game with Monta and Raymand Felton doing backup ball handler duty. And, as tempting as it is to freak out, Felton for 10 minutes per game is perfectly reasonable.

So, it's no surprise that wings have been priority number one so far. As far as I can tell, the decision tree goes something like this:

In three of those four contingencies, the Mavericks will have to be paying the wing player that they sign at least $10 million per year, leaving them with just $4 million to spend on point guards and the rest of the roster, provided that they want to re-sign Vince, Devin, and Dirk. If the Mavs actually succeeded in getting a star, they'd have the piddling mini mid-level or minimum contract to sign guards, and that's without Vince or Devin to join them.

Still, this could be a great opportunity for Dallas. Cuban prides himself in exploiting "market inefficiencies," and a big part of that is learning what to spend on a player relative to what they produce.Or, perhaps, more interestingly, what players are likely to produce relative to what you pay them.

The Heat last season were fielding 4 very good rotation players on rookie or minimum contracts. The Spurs' finals MVP is on an ultra-cheap rookie contract. The Rockets have two of the top 10 "value for cost" players in Harden and Chandler Parsons. Damian Lillard is still on a rookie contract. Maybe the only exception that I can think of among elite teams immediately is the Clippers.

If the Mavs are going to fill their wing position with a star (or, in the case of Bledsoe or Lowry, fill their point guard position) it's going to be a huge necessity that the Mavericks maximize the value they get for that last player's contract.

To that end, I came up with a basic measure of a players' contribution relative to his cost: PER (a measure of almost pure production) weighted for defense using DRAPM, or Defensive Real Adjusted Plus Minus (a measure of defensive impact without the influence of other players) and then the total is weighted again for projected role on the team (done in terms of minutes).

The total is then divided by the projected cost of their next contract (calculated by taking the average "high" range on contracts as speculated by as many sources online as have speculations. I went for the high end, thinking that it would be the total that Dallas would need to spend to wrest a player away for sure).

(PER * DRAPM * Minutes)
------------------------------------
Contract (in millions)
For the stat-heads: I normalized the DRAPM measures of the Free Agency class so that each DRAPM would have a minimum value of 0 if any score was more than three standard deviations away below the average, or max value of 2 if it was more than 3 standard deviations above the average. Minutes were used as a weight by dividing a player's projected minutes by 25, or the average of every projected players' minute totals.
It's not perfect, but it gives a rough measure of production, with a special emphasis towards a players' defensive impact (big for these Mavericks), and it resulted in some really interesting revelations.
Before I go any further, please don't freak out that the Stars didn't fair so well in this measure of utility. That shouldn't be a surprise: their contracts get very big, and PERs only get so high. The model, after all, doesn't account for the fact that every PER point from 25-30 is worth twice as much as every point from 20-25, and so on.
Also, the model can't account for LeBron taking lots of games off on defense during the regular season, so take his number with a grain of salt in particular.
But all in all: the stars are more valuable than the role players, we already know that. What's more interesting is the value that the different role players have. And, in some cases, the value players within the same tier (i.e Ariza and Deng) have, per dollar. 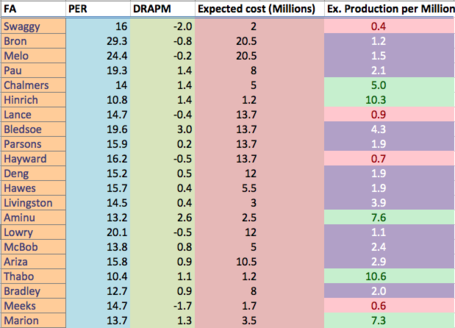 Interesting finds here. First, the difference between a role-player and a star is so stark and obvious on this chart. Melo may not give you a lot of production for every dollar, but when you add up all the production he brings, it's a lot.

But anyway, it would appear that Thabo Sefolosha and Kirk Hinrich are the two best value guys depending on whether the Mavs need to find their value at the guard or wing position.

That makes sense, too, given that both bring a modicum of three point shooting and scoring with some very good defense on a contract either close to or at the minimum. They bring more or less what the Mavs need, albeit without any bells and whistles, for as little as possible.

Aminu and Marion are interesting, too, because they offer almost no offense but are both smart and measured about it, while offering excellent and good defense, respectively. Apparently, that's enough to be really valuable in a very cheap, limited starter role (both were projected to 21ish minutes per game).

The most interesting high-value names to me, though, are Mario Chalmers and Eric Bledsoe. Chalmers is the only player in the list projected to something at least like a starter role (I logged him at 27 minutes per game) with a value score that high. His production is solid though, his defense is in the 70th percentile, and he'd come cheap. Chalmers could be the realest "bargain" on this list.

Bledsoe, too, is foam-at-the-mouth inducing. He's the only player who would command anything close to a max contract who still brings a lot of value per dollar. I mean, seriously: the guy has a star-level PER near 20, while logging the best defensive score of anyone in the group.

The other stars are all great, but barring signing LeBron, it might be worth making a run at Bledsoe before going for Melo or Deng or anyone else. Phoenix has said that they'll match any max offer, but if Dallas makes a move at Bledsoe really early, and Phoenix isn't prepared because they're making a run at Melo and Bron, why couldn't the Mavericks steal him away? The fit is too good to not want to at least try.

The rest isn't a surprise. Nick Young and Jodie Meeks' scores are so low because both are in the bottom 10% of defenders and they're not cheap enough to excuse it. Lance and Hayward are both a bad combination of not-quite-productive-enough, not-quite-enough-defensively, and expensive.

Keep an eye out for Cuban and Donnie looking for a bargain after they've reeled in their big fish. Free agency has started people. Get excited.