Ultimately the offer sheet was too steep for Houston to match without Bosh on board, meaning that Chandler Parsons will officially be a Dallas Maverick.

Chandler Parsons will be starting for the Dallas Mavericks in 2014-15.

Parsons. A Maverick. Soak it in. Now EVERYONE PARTY.

I'm not even going to try to contain my enthusiasm here. I've been wearing Mavericks gear non-stop all weekend because I'm one of those crazy superstitious sports fans. The pendulum swung back and forth a couple of times with LeBron, Chris Bosh and Trevor Ariza all making somewhat surprising free agent decisions. Today in particular was very confusing, as no one could figure out what Houston or Dallas was doing. I think everyone expected it to come down to the end of the day deadline. But Houston saved us speculation and now I am ecstatic.

For those who are skeptical, or think that Parsons is overpaid, let me just try to assuage your worries over the next few paragraphs.

Chandler Parsons is going to be an excellent Maverick. Depending on how well Dirk's percentages hold up as he continues to get older, he could very well be Dallas's most efficient shooter before the end of the season. He instantly fills the shooting hole left by trading Calderon and maybe covers a little bit what the Mavs will miss from Vince as well. Further, he is a young, lanky small forward with a ton of upside.

Let's talk about how Parsons fits on the offense, since this his most obvious plus. He is a very well-rounded offensive player, capable of playing on- and off-ball. Parsons' shooting makes him an excellent kick-out option for a slashing Monta Ellis or Devin Harris, or Dirk off the post up. He can also make the extra pass if you have someone like Mo Williams open elsewhere on the perimeter.

However, he can also handle the ball well for a 6-foot-9 small forward. Parsons should be a really good pick-and-roll and pick-and-pop partner for Dirk. And while he isn't quite the facilitator that Monta is, he has improved over the past three seasons.

The best part is that his shot chart is close to perfect in terms of efficiency. He takes almost all his shots from beyond the arc or right at the basket, with almost no long 2-point shots. Seriously, look at this shot distribution: 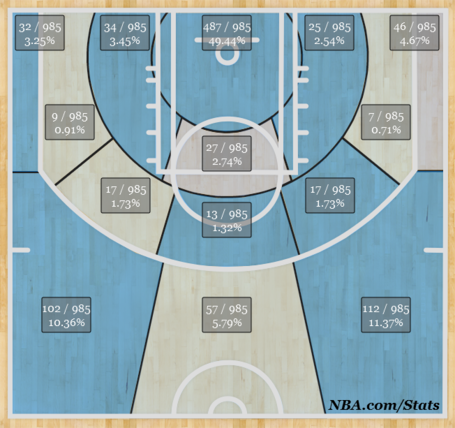 In short, Chandler Parsons will be a perfect fit in Rick Carlisle's flow offense, with the ability to mesh really well with both Dirk and Monta.

But of course, the thing everyone is going to worry about is his defense, right? Parsons isn't likely to be the "guard-the-opposing team's-best-player" defensive stopper we were used to with Shawn Marion, but there is a good chance that he will be a more than serviceable perimeter defender, especially under Rick Carlisle's tutelage.

Parsons was actually really good defensively his rookie season. As he became more of a focal point on the offense, defense became less of a priority and fell off a bit. But anyone who thinks he can't be a good defensive player is dead wrong. Parsons is still growing as a player, and I have no doubt that he can grow into a really quality two-way player, especially if he isn't asked to do too much on offense.

A lot of people are going to say that they would rather have had Ariza for $8 million a year than Parsons for $15 million, which is reasonable. But I disagree: Parsons is younger than Ariza, on a shorter deal, and has a much higher ceiling -- not to mention that Ariza has a reputation for being a contract-year warrior. Worst case scenario, the Mavs overpaid for a couple of years of a young borderline All-Star small forward who fits the offense really well. Best case scenario, Parsons grows into an all-around player who is totally worth his contract, and maybe the Mavericks find their key post-Dirk piece of the puzzle. Time will tell.

In any event, I'm excited. For a long time now, the Mavericks' MO has been putting together a team completely dependent on reasonably priced, savvy vets whom others in the league thought had nothing left. And they've been fairly successful with that. But for the first time in a long time, two of the Mavs best players are on the right side of thirty, and both have the potential to continue growing as players. If that doesn't get you excited as a fan, I don't know what to tell you.

As far as where Dallas goes from here, they have to try to build a decent bench on minimum contract players. Expect to hear about Mo Williams soon. If that works out, you're probably looking at a Mo-Monta-Chandler-Dirk-Tyson starting lineup, with Devin and Brandan Wright headlining the bench. Crowder is probably the primary backup for Parsons.

But there is plenty of time for more roster speculation in the coming weeks. For now, everyone welcome the handsome young Chandler Parsons to Dallas.

Chandler Parsons is a Dallas Maverick