Paul Pierce profile: How much does the Truth have left?

Paul Pierce could follow in the footsteps of the Matrix and Vinsanity in transitioning from superstar to Mavs role player, but how likely is is that Pierce comes to Dallas?

Share All sharing options for: Paul Pierce profile: How much does the Truth have left?

For the most part, Pierce seemed to have adjusted to playing a smaller role for the Nets than he ever did for the Celtics and continued performing at a high level. He took a much higher percentage of his shots from beyond the arc last season, and hit them at a 37 percent rate. He was particularly deadly from the left corner last season. 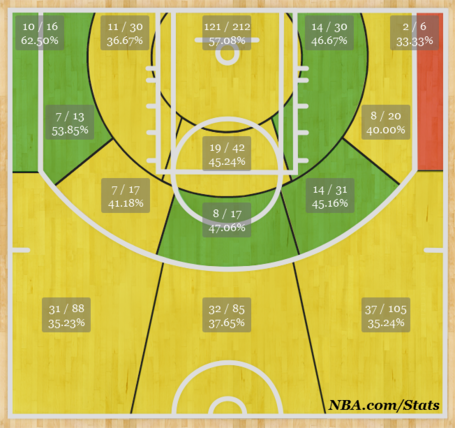 Paul Pierce has always been a quality two-way player, and while he isn't as athletic as he used to be, he still has the experience and determination to be a plus defender on the wing. Part of his strategy on defense seems to be getting into the head of his opponents more than shutting them down on a purely physical level, and there's no reason why he can't continue doing that until he retires. And because defense can often comes down to timing, effort, and know-how, Pierce can still be a really effective team defender, like so:

Paul Pierce Saves the Series with a Block on Kyle Lowry! (via NBA)

But at this point in his career, Paul Pierce's biggest strength may be his experience and leadership qualities. Pierce is notorious for his antics, grit and energy. He is the sort of guy that can get his teammates fired up during a slump or find themselves losing a big lead. In other words, he's exactly the sort of the guy the Mavs could use on the floor at the end of games.

If the Mavericks want to spend more money on a back court partner for Monta Ellis (for example Kyle Lowry or Eric Beldsoe), then that might hurt their ability to sign some of the bigger name small forwards like Luol Deng or Trevor Ariza. If that happens, I could see a small forward rotation of Paul Pierce, Shawn Marion and Jae Crowder working out fairly well for the Mavs.

Assuming Pierce has something left in the tank, Rick Carlisle has proven that he can the most out of aging stars at the end of their careers. Pierce could probably be fairly effective as a nominal starter playing around 20 minutes a game. Plus, wouldn't it be fun to have all three (Dirk, Pierce and Vince Carter) of the All-NBA players from the 1998 draft on the same team?

On the other hand, if the Mavs do sign a legitimate starter at small forward, Paul Pierce could probably be an effective replacement for Carter, Marion, or both, playing the sixth man role backing up both the 2 and the 3. The question at that point becomes: (1) Would he be interested in that? and (2) What will his price tag be?

I really like Pierce's fit with this the Mavs if he is interested in taking a slightly reduced role. But in all likelihood, Pierce may well sign with another team before the Mavericks get around to negotiating with him. They're clearly going to take a stab at Carmelo Anthony (and maybe LeBron James), and (if those efforts fail) then will turn to Deng, Ariza, and maybe Gordon Hayward or Chandler Parsons before they start talking to aging vets like Pierce, Carter and Marion.