Five Out Offense: The 15-man roster is nearly set, looking closer at Aminu

Also, Mark Cuban is a good businessman with a new hip, and is now ready to party with Chandler Parsons. Or something like that.

Share All sharing options for: Five Out Offense: The 15-man roster is nearly set, looking closer at Aminu

1. ROSTER TALK: Here's what it looks like at the moment.

Nelson could officially sign today, leaving one roster spot open. It could go to Eric Griffin, who the Mavericks signed to a three-year deal -- mostly unguaranteed, but with $150k committed up front. It could go to Bernard James, who the Mavericks reportedly planned to bring back earlier this offseason. If the Mavericks were able to find someone willing to take Gal Mekel for next to nothing (a future second round pick or cash), maybe they could bring both back.

But other than that final roster spot, we're pretty confident that's what Dallas roster will look like. And it's not bad. Not bad at all.

2. THE LATEST SIGNING: Want to know more about Al-Farouq Aminu? TrueHoop's Bourbon Street Shots can help you out. Read them reviewing Farouq's season, both last year and in 2012-13.

3. MARK CUBAN IS A REALLY GOOD BUSINESSMAN: Because here I am, about to talk about CyberDust, that app he's been promoting for the past couple months. 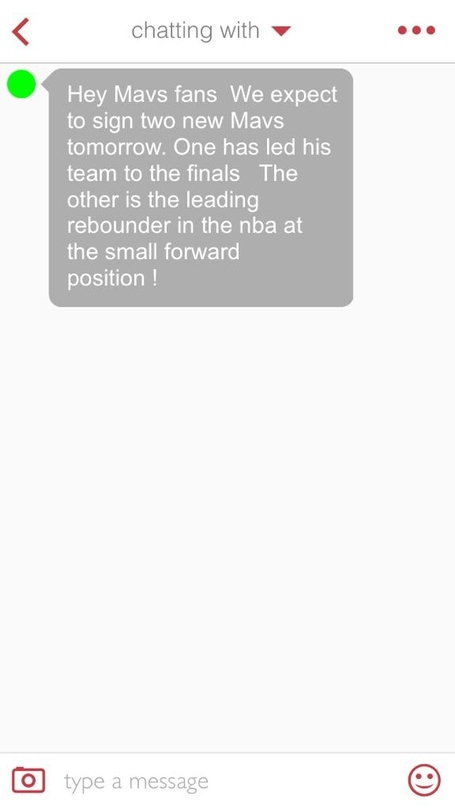 He Cyberdust'd that yesterday afternoon, at which point the Nelson signing had been heavily rumored but the Aminu news hadn't broke. He later sent out a link to this article, talking about Aminu's defense.

So what's the point here? That was really pretty smart, because here I am, talking about it. Hell, I'll even mention that the app just came out on Android. It's a little thing, but it adds up.

4. SPEAKING OF CUBAN: He just had hip replacement surgery. And he decided to post about it to Instagram. Because that's what Cubes do.

5. DO YOU WANT TO PARTY WITH CHANDLER PARSONS?: I'm not saying you will, or that it's likely. But in an ESPN interview, he said that as a single 25-year-old, Dallas has impressed him. JUST SAYIN'.