Dominant Juggernaut or Scrappy Dark Horse: Which Mavericks team do you prefer?

Most people remember the championship team as the team that rallied from the Portland series and "caught lightning in a bottle" to propel them to the top of the NBA. But that wasn't the only Dallas Mavericks team worth remembering from that season.

Share All sharing options for: Dominant Juggernaut or Scrappy Dark Horse: Which Mavericks team do you prefer?

I'm sure it's not that hard for everyone to remember the playoff run. Things started off a little bit shaky in the first few games of the Portland series, but after that it just felt like destiny, didn't it? That team was the perfect storm, with each player manning his role perfectly.

But one of the more interesting things about that team (beyond the obvious) was that -- despite most of the same pieces -- the team that won the championship felt very different from the Mavs team that dominated the early part of the 2010-2011 NBA season. In the warm glow of the championship run, a lot of people forget that the team looked and played a lot differently in the final months of 2010. The Dallas Mavericks were not the scrappy dark horse overachievers; they were the dominant juggernaut that could destroy other teams at will. And it was awesome.

Don't remember it that way? Let's take a look.

I'm not the only one who thinks that the Dallas Maverick team that was kicking everyone's ass before Caron Butler got hurt was possibly the greatest Maverick team ever. Andrew Tobolowsky wrote a fantastic article last summer about this team, and you should all read it right now. Seriously, I'll wait.

I won't try to improve upon what Andy wrote; instead, I'd like to discuss my own observations. I've been a Maverick fan for a while, but I didn't really follow basketball all that closely until the 2005-06 season. While that season ultimately broke my heart, it really sparked my passion for the Mavs and basketball more generally. Ever since then, I've watched a lot of basketball. But I never followed a team more closely than in 2010-11.

I'm not going to lie; I enjoy watching teams I root for destroy people. I know that as fans we're supposed to claim that we like scrappy underdogs and close games and blah blah blah. But there's something so satisfying in watching your guys just crush the other squad.

In the final few months of 2010, the Dallas Mavericks -- led by the combined brilliance of Dirk Nowitzki and his newest (and possibly best) sidekick Caron Butler -- did just that: dominate.

There's something so satisfying in watching your guys just crush the other squad.

I'm sure most long-term Mavs fans can corroborate my feeling that the Dallas Mavericks are almost always a lovable but frustrating team. I've always believed that if Dallas could put the right talent around Dirk, they could take anyone. In a league where less than a third of the teams have ever won a championship, I've always thought fans who believe 'winning it all' is the ultimate goal of their franchise were chasing a fools errand. Fun basketball is the best many teams can hope for without the right superstar, but I always knew that Dirk was someone you could build a championship roster around. I'm sure that I'm not the only one who started to wonder whether that was ever going to happen. And then I got to see 2010-11 team.

In the fall of 2010, I had just begun my first year of law school. I was also living outside of Texas for the first time, and it was thus harder than ever to watch the Mavericks play basketball. But that team was so much fun, and I was captivated by their dominance, so much so that I invested in NBA League Pass for the first time just so I wouldn't miss a game.

That team had everything: coaching, depth, the right defensive pieces. In his third season as the Mavs' head coach, Carlisle finally had his system -- and more importantly the right players -- in place (it is also worth mentioning that Carlisle was out for a bit due to injury, and now-Raptors head coach Dwane Casey ran the team quite well in his stead). Tyson Chandler, Shawn Marion and DeShawn Stevenson (and to a lesser extent Jason Kidd and Brendan Haywood) cemented probably the best defense I've ever seen the Mavs play. Carlisle convinced Marion (who would've been the starting small forward on any team other than the Heat and the Thunder in 2010-11) to come off the bench behind Dirk's recently acquired sidekick, Caron Butler. Along with Jason Terry, JJ Barea, and Brendan Haywood, the Mavs had arguably the best bench in the league.

And speaking of Tuff Juice, I am enjoying Monta Ellis (and have high hopes for Chandler Parsons), but Butler's presence on the team finally gave the Mavs the two-star roster they had been missing ever since Cuban tragically elected not to give Steve Nash the salary he deserved. In the fall of 2010, Butler was basically everything we had always hoped Josh Howard would be, but he did it more consistently and more reliably. Watching him play with Dirk was unbelievably satisfying ... but then Dirk went down, followed shortly thereafter by Butler. 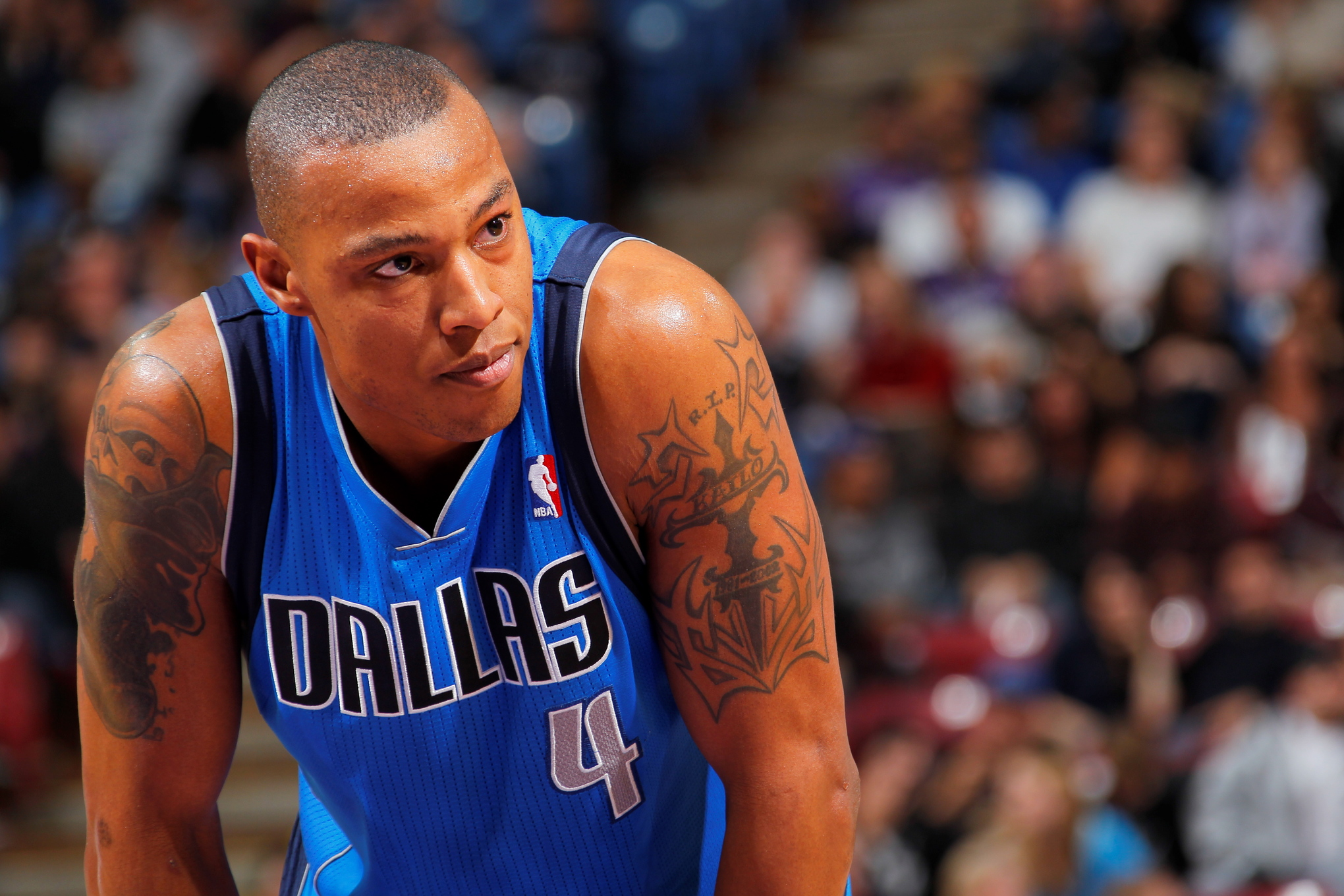 Moving on without Butler: Reorienting the team on the fly

When Dirk went down with a knee injury on Dec. 28, 2010, the Mavericks were 23-5 and 10-1 on the road. Things did not go well without him. The team went 2-7 and lost his first game back as well, falling to fifth in a tough Western Conference. And the worst part is that a few days after Dirk went down, Butler blew out his own knee. And while Dirk would come back, Butler would not.

Fortunately, Rick Carlisle is a genius, and the Mavericks front office is fully capable of filling out a roster (as long as we're talking about free agency, not the draft). No one on the roster could replace what Butler could do in terms of taking some of the scoring burden and overall pressure off of Dirk's shoulders. As with past (and future) years, the Mavs were once again Dirk and the other guys. Fortunately, these were the perfect cast of other guys.

With Butler gone, Marion was once again the starter at small forward. This created a need for new depth behind him. Sasha Pavlović was an interesting temporary part of this and had a few good games, but he didn't stick. So the Mavs added one of the greatest 3-point shooters of all time in Peja Stojaković. A couple months later, they picked up Corey Brewer. Brewer was a talented young swingman with a reputation for defensive acumen. His early career was adversely affected by an ACL injury that cost him half a season. He was part of the trade that sent Carmelo Anthony to New York, and when the Knicks subsequently waived him, the Mavs added a good, young piece.

Once the front office had replenished the roster, it was up to Rick Carlisle to figure the best way to move forward. 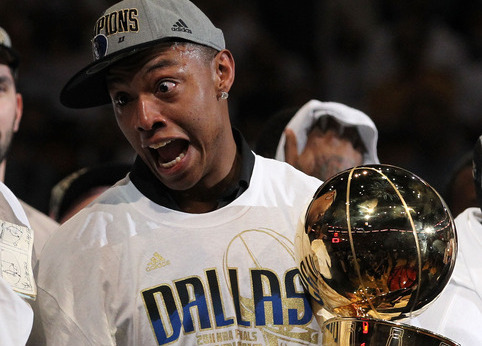 The really cool thing about the championship team is the way in which it was the perfect version of every Mavs team that has existed since Nash left. Bill Simmons published a really fascinating article a couple of weeks ago that was mostly about Carmelo Anthony but also had some very interesting insight into the Mavs championship roster. As Simmons pointed out, the Mavericks won the championship by putting exactly the right pieces around Dirk, an all-time great offensive weapon. As Simmons put it:

While that was a winning formula, it took a while to cement. This wasn't the same team once Butler went down. They could keep up with anyone, but these Mavs weren't destroying anyone any more. They learned to win with savvy rather than force. They learned how each player fit with every other player, who worked best in what role, and Carlisle learned how to pull all the right levers at all the right times. Further, they learned how to stay in a game enough that they could turn it on at the end and take over when they needed to. And more than anything, they needed Dirk (as usual) to carry them to glory. But more on that in a minute.

Unlike earlier in the season, the Mavericks didn't destroy opponents. Instead, they adapted to them. One of the coolest things about the championship team was the way the players at the end of the bench would all play small, but vital roles. JJ Barea was inserted into the starting lineup a couple of games into the Finals, and it worked. Brian Cardinal would come in every now and then to draw a charge and knock down a three. Peja didn't play at all in the Finals, but he had two double-digit scoring games in the Mavs' sweep of the Lakers, including a perfect 6-for-6 performance in the famous Jason Terry game. When Brendan Haywood went down with injury in Game 2 of the Finals, Ian Mahinmi stepped up. And even despite Carlisle's infamous preference for experienced vets over unproven young talent, Corey Brewer provided a small spark in a few minutes of the Lakers series, without which the Mavs might not have won Game 1.

Before Butler went down, Dallas looked like one of those historically great teams to me

And even with all of that, the team still probably wouldn't have won the championship without an all-time great playoff performance by Dirk. In the 2011 playoffs, Dirk averaged 27.7 points, 8.1 rebounds and 2.5 assists per game with a 25.2 PER, all while averaging 49 percent from the field, 46 percent from three and 94 percent from the line. This was an historically remarkable performance by one of the greatest NBA players of all time. And the post-Butler Mavs needed every bit of it to win the franchise's first and only championship.

This is pure speculation on my part, but before Butler went down, Dallas looked like one of those historically great teams to me. One of those unstoppable forces that happen every now and then in the NBA. That team was going into the playoffs as the favorite, and I doubt anyone would've been able to stop them.

But we didn't get that. Instead, we got a Mavs team that was basically like every other Mavs playoff team, good but unspectacular. As usual, everyone thought that team was maybe good enough to make some noise, but certainly not a legitimate contender. Many thought they were destined for another first round exit. And as fun as watching a dominant Mavs team crush all its opponents on its way to a championship would've been, it was ultimately more satisfying to watch a team that was the best version of what the Mavs have always been prove all the haters wrong.

So I guess, in the end, I'm conflicted about which iteration of the 2010-11 Dallas Mavericks I really liked best. What did you guys think?