Here's what you need to do right now.

STEP ONE: Do you own this DVD? 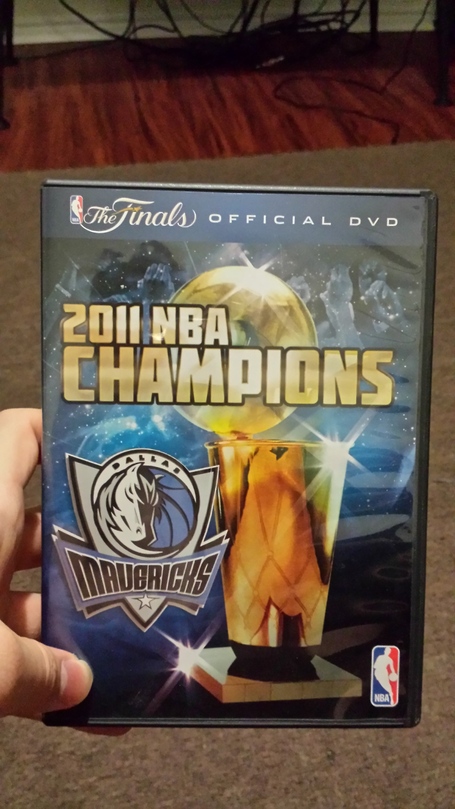 If yes, go grab it and pop it into your preferred choice of DVD player. If no, slide on up to that video at the top of the article just like Rihanna slid into Joel Embiid's DMs. (If you have the DVD but don't want to leave your computer, you might be a literal sloth but that's totally acceptable.)

STEP TWO: Can you spend the next hour, 26 minutes and 19 seconds watching this? (The actual length is 1:24:19, but I gave you two extra minutes to cry tears of joy afterwards.) If yes, proceed to step three. If no, why not? "Work" isn't a good enough excuse. Dirk was at work when he WON the damn title; you're just watching an hour-long video about it with no physical activity. Although if you work up a sweat belly-laughing at Dwyane Wade's flop at the end of Game 2, you're doing things right.

STEP THREE: If you are like me, you'll probably get hungry in the middle. Go grab a snack before beginning, but not popcorn, because it gets stuck in your teeth and leaves an awful fake butter residue all over your mouth that will bother you for hours. Seriously, popcorn sucks. (Kettle and caramel corn is excused -- it still gets in your teeth, but it tastes good enough that I will willingly make that sacrifice.)

STEP FOUR: Decide whether you're going to invite friends. Really, it depends on what type of fan you are. If you watch games by getting drunk with strangers at a sports bar, invite some people. If you watch games alone in your "man cave" so you can unleash the foulest string of expletives known to man when the referee calls Dirk for a foul, you might want to handle this one alone. (Not that Dirk has ever actually fouled someone, don't be ridiculous. He's an angel and would never do something hideous like that.)

STEP FIVE: Hit play. Revel in Dirk's temporarily shaved head. Savor every crazy-ass J.J. Barea drive into the paint. Let out a squeal when you remember the same Tyson Chandler that just threw down an alley oop is once again a Maverick (*squeeeealll* sorry that was me). Silently bless the basketball gods for Shawn Marion. Laugh uncontrollably when you see Steve Novak as a Maverick early in the video. Take a shot every time they make a cut to Jason Terry saying something incredibly cocky. (Mavs Moneyball is not liable for any alcohol poisoning you might suffer from playing this drinking game.)

STEP SIX: There! You did it! Remember those extra two minutes I gave you for a happy cry? Use them. I'm right there with you, bro. Sing "weeeeeee are the chaaaaaaaaampions of the WOOOOOOORRLLLLDDD" to your boss when he asks you why you haven't done any work for the past one hour, 26 minutes and 19 seconds (plus the five minutes you spent getting your non-popcorn snack prepared). He'll understand. If he doesn't, you probably should find a new job anyway.

But seriously, if you have time to check this video out, I would recommend it to the highest degree. It'd be a good thing to invest an hour into before bed sometime this week. Also, feel free to post your own favorite Mavs championship videos in the comments. There are dozens of good choices out there, and many in a much more manageable time frame.