Going to the movies with the Mavericks and Blazers

The Mavericks re-wrote their playoffs script while I finished an era (of sorts) of my own.

Share All sharing options for: Going to the movies with the Mavericks and Blazers

Everyone remembers their first job. Whether you're 17 or 87, you'll never forget just how forgettable that probably part-time, probably minimum-wage job was. It's still your first one, though, and that matters.

I would wager that most people who land their first gig at 16 likely find a new job within six months or a year. I was not one of those people. I began working at Cinemark a few months after my 16th birthday in 2007 and stayed there for three-and-a-half years.

I immediately loved it. I loved getting paychecks. I loved seeing movies for free. I loved the autonomy I gained just by working harder than other people. Although I was only making a shade over eight bucks an hour by the time I hit my three-year "anniversary" -- if that's what you want to call it -- I wanted to stay. And heck, why not? I was a sophomore in college at the time and could request time off whenever I needed for projects, mid-terms, finals, and so on. It was the perfect setup.

Two intersecting events ultimately led to the end of my time at The Best Seat In Town. First, I was promoted to managing editor at my university's school newspaper. (Sweet!) Second, the Mavericks made the playoffs, and deep down I thought they'd be making a bit of a run this time around. The year was 2011, and at that time "a bit of a run" in Dallas terms meant making it to the second round. My sister and I had access to playoff tickets through my mom and I wasn't going to miss out on a Mavs/Lakers series... if Dallas could get by Portland in the first.

That was a big "if" at the time. Remember, Dallas lost the year before as a 2-seed to San Antonio. One year later, the Mavs were favorites to lose to the upstart Blazers, featuring at the time oversized point guard Andre Miller; the kneeless Brandon Roy; iconic shooter Marcus Camby; and, of course, LaMarcus Aldridge. Everyone was picking Portland. Like, seriously, everyone.

Surely there was no way the Mavs could lose to them, right? I put in my two weeks at Cinemark after Dallas went up 2-0. My last shift would be that Saturday, April 23.

My first game came before I knew what a "mom" is.

I suppose it's worth mentioning that my mom has worked for the Mavericks for 30 years and my dad has an even unhealthier obsession with sports than I do. As the product of their DNA, I have quite literally breathed Dallas basketball my entire life. My first game came before I knew what a "mom" is. So when the Mavericks lose, my family loses. With all that in mind, suffice it to say that 2006 gutted not only me, but my entire family. These were absolutely dark times in the Karalla household, and those times continued into 2011. The only two constants which persisted through the Mavs' 2007 first-round exit at the hands of the Golden State Warriors and the 57-win 2010-11 season were my own teenaged angst and, yes, Cinemark.

The Mavs lost a close Game 3 in Portland due to some weird late-game happenings. I wasn't worried. I was actually more worried about holding it all together on Saturday night. I'd be closing down box office that night, handling a thousand bucks in other peoples' cash for hopefully the last time in my life. But I was leaving Cinemark. It wasn't just a job. It was my job. I was that overzealous part-time guy that everyone hates but no one says anything to because no one actually wanted to talk to me. But that was fine, because by then I was much older than most of the kids who worked there, anyway. I didn't know any of their names. Included in my two weeks email to the management staff was the request that they not tell any employees about it because I didn't want it to be a "big deal." I was that guy. After the shift, I would post lyrics from Frank Sinatra's "My Way" on my Facebook. 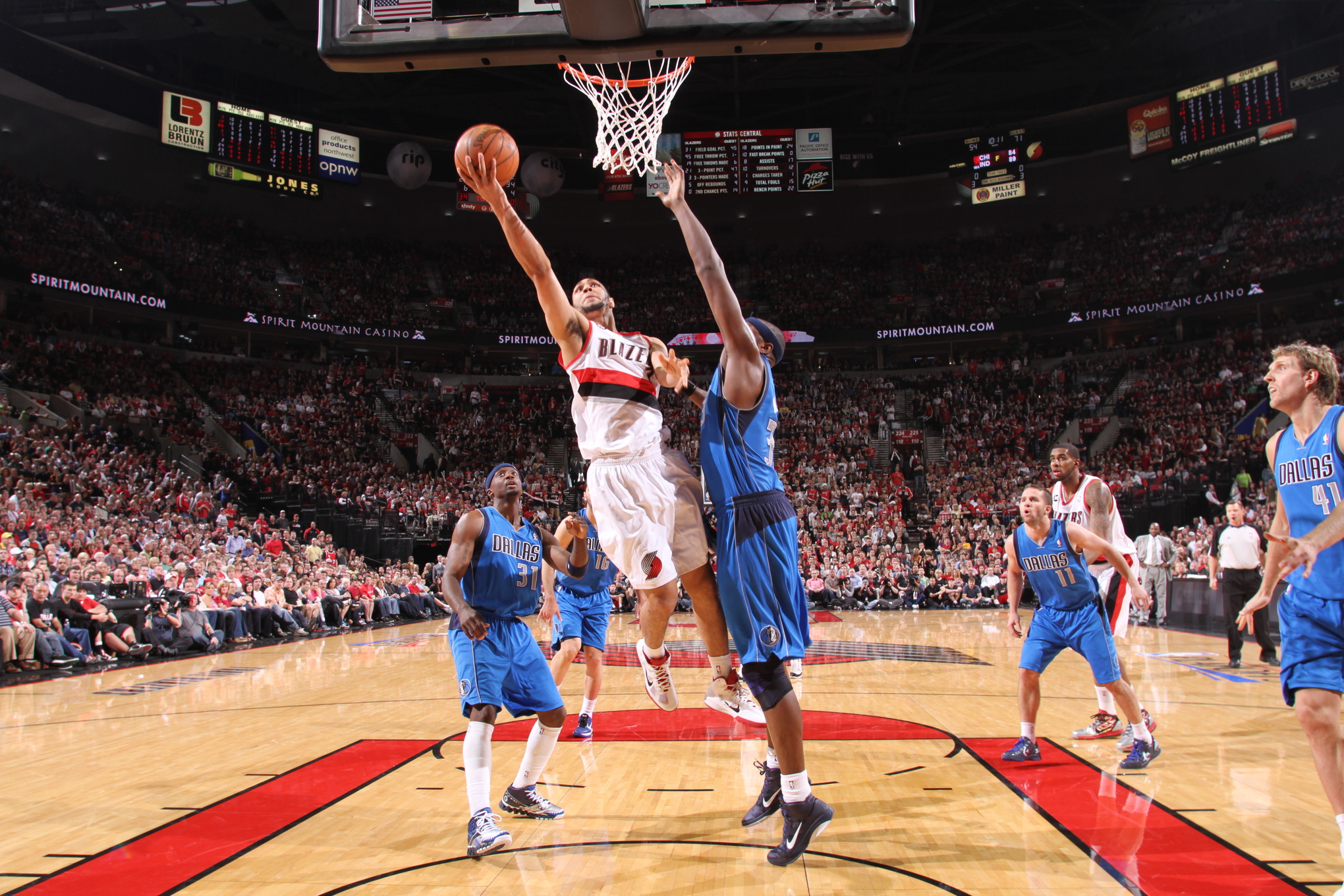 And these Mavericks, man. They made my last day even tougher. A fortunate late-afternoon start allowed me to watch the first three quarters or so of Game 4. Dallas surged out to a 23-point third-quarter lead behind seven Dirk points in a minute and a half and some sharp shooting from Peja. The last thing I saw before leaving my apartment to face my destiny was a last-second Roy three-pointer to shrink the deficit to 18 heading into the fourth. I didn't care. Dallas would still win, and Dallas would win Game 5, and Dallas would beat the Lakers, and all would be well. Just get through this shift without making an ass of yourself, Bobby.

I pulled in to the Cinemark lot, said goodbye to some of the managers on their way out, clocked in, and got to work. I didn't bother listening to the game on the radio on the way, because I figured it wouldn't matter anyway. At that point, I had just acquired my first smart phone, but I didn't score-check, either. I was on the clock, after all.

But, still, curiosity got the best of me. I pulled my phone out of my pocket during some down time at the theater and I had a text from my dad. A few texts, actually. What I saw was really confusing. Stuff about Jason Terry needing to take a bus home. Something about how these are the same Mavericks we saw last year, when we secretly thought they might win the whole thing. Finally, my dad said he'd never again vehemently defend Dirk, because everything his critics said about Dirk and his teams was correct.

Everyone knows the 2010-11 season for the championship-winning squad, but fewer recall there were two Mavs teams worth remembering from that season.

A repost of our former editor, Lisa Rotter, talking about partying with the team in Miami after they won the championship.

That had before been sacred ground. You can criticize Damp and Fin and JET and Stack and J-Ho, but you DO NOT insult Dirk Werner Nowitzki, a Karalla family deity.

But in one fell collapse, as Dirk and the Mavs succumbed to Roy and Aldridge, our Nowitzki castle came crumbling down. This loss was the breaking point in what had been a slow, miserable build-up. It was over.

And at that point, logically speaking, Dallas was done. Teams don't come back from implosions like that. Especially the Mavericks. We saw the same damn thing in Game 3, 2006, when, cryptically, my dad began singing "We Are The Champions" when Dallas went up 13 and Miami called timeout. It would be five years before I could hear that song again and smile. But when Dirk's team blew leads, they were done. Dallas would lose in six. I was resigned to my fate.

I'd already wanted neither pomp nor circumstance during my last shift, but the outcome of Game 4 eliminated the chances of leaving Cinemark with grace. I was an emotional and psychological wreck after having just spent five hours in a small box office, a literal glass case of emotion, the physical representation of the psychological prison I sought as Roy took down the Mavericks and their chances at a title. By the time 11 rolled around, I just wanted to get the hell out of Cinemark. And I did. Just like the Mavs' season, my movie theater career was coming to an end.

But that Monday, something crazy happened. Dallas won. Maybe this team was different. And then three days later, when I was acting as managing editor for the first time, producing a newspaper that maybe a couple hundred people would thoroughly read, one eye was glued to the TV as the Mavs took it to the Blazers in Portland. Dirk was phenomenal -- 33 points on 17 shots, 11 boards, four dimes, +12 in a seven-point game. He'd have a lot more of those games in the coming months. JET added 22 points and eight assists. He would, too.

That Game 4 implosion, by the way, would be the team's last loss for 26 days, and it would be another two weeks after that until Dallas would lose again. Through it all, I had no box office to retreat to, no popcorn to make, no candy to sell, no vomit to mop. Instead, I had a publication to produce, connections to make, and much to learn. I was growing up, and so were the Mavericks.

A special thanks to our friend Bobby Karalla for contributing to Championship Week. You can follow him on Twitter at @BobbyKaralla and find more of his work on Mavs.com and MavsOutsider.com.