Everyone has their own way to celebrate...

Share All sharing options for: How the 2011 Dallas Mavericks trophy gave me the most expensive hangover of my life

It was a mistake, ok? If this was the worst thing I had ever done in my marriage, then so be it. Plus, the Dallas Mavericks won their first championship in franchise history less than 24 hours ago... she can't be that mad at me, right? RIGHT?

Those were the words I said to myself as I sat alone in my empty apartment, waiting for my wife to come home. I sat at the dinner table, sleep deprived, un-showered, and only halfway recovered from one helluva championship hangover. A muted episode of Friends played on the 42 inch TV to my right. It was the one where Ross and Rachel broke up...which I took as a bad sign. My dog was lying silent on the arm of the couch like he always does, only this time he had a peculiar look on his face as he stared at me. That look read "you are so screwed".

She would be home any minute now. My dreadful fate would soon be met. I wondered about the different reactions my wife might have. Chances are she'll be pretty angry with me. Would crying help? Is it pathetic that I am even asking that? And what are the odds that she'd be cool with the whole thing? I mean, she might understand that I was just on a high from all the celebration. I mean, after all...championship!

My dog was right. I was screwed.

Game 6 of the 2011 NBA Finals is just an hour away from tipoff. I had just finished my superstitious pre-game run, which I should explain the importance of. The run started before the very first Mavs playoff game against Portland in the first round. After that win, I made the choice to replicate the exact same run before every single Mavs playoff game until they get booted from the playoffs. Three miles - same route - same time - same playlist - every time. It was torture. The last song on the playlist was "Don't Stop Believin" by Journey; an awful decision on my part. But I was a fan and fans have a responsibility to their teams, dammit. The only time I didn't listen to Journey was before Game Four when Brandon Roy decided he'd go all demi-god on us. It was then when I realized there was power in the superstitious pre-game run - power that would send us all the way to a Game 6 elimination game in Miami. That night, I walked into my apartment, fresh off another "Don't Stop Believin." I was feeling pretty great - mostly because I knew that was the last time I'd ever listen to that damn song. 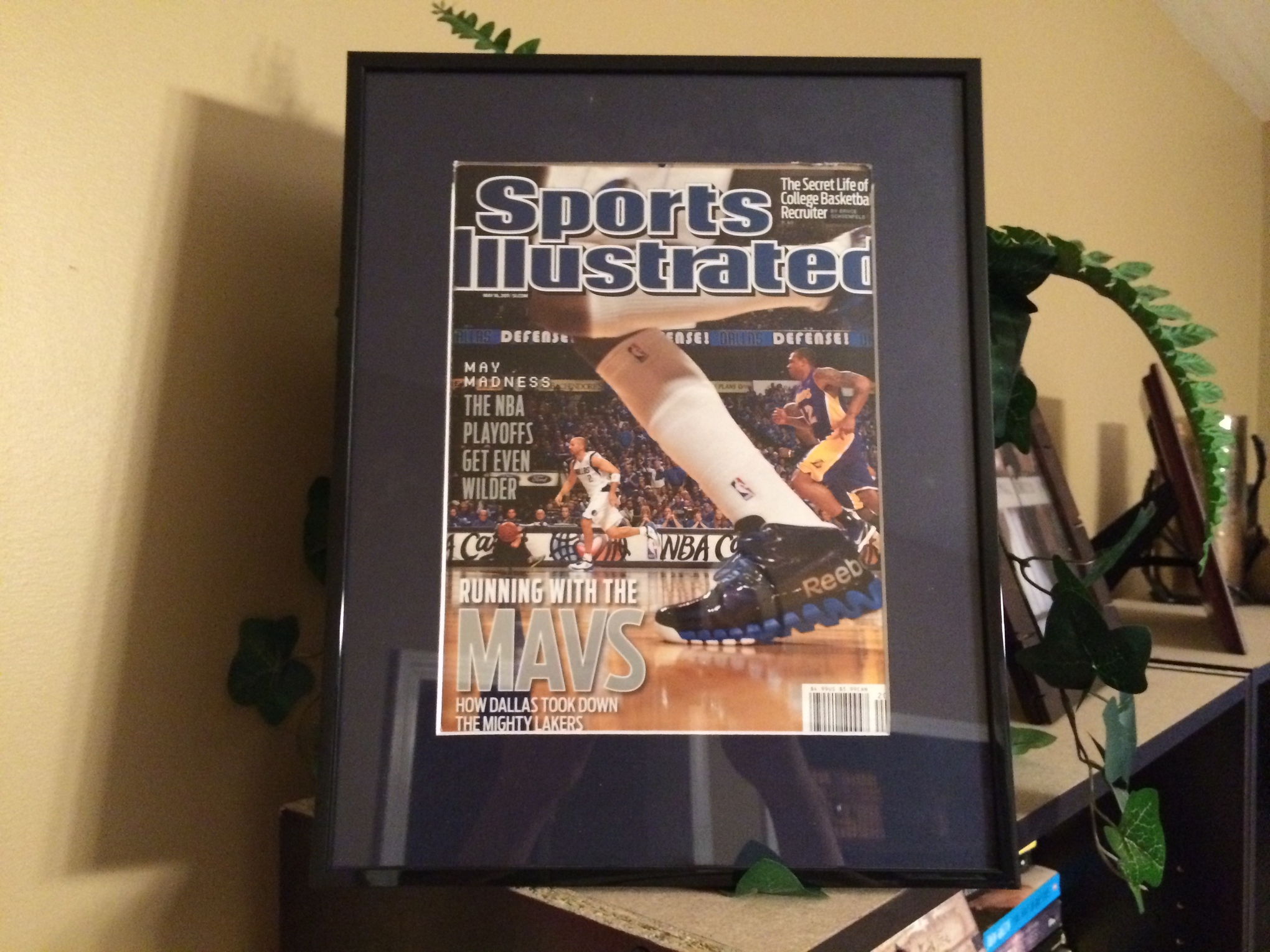 "You excited?" asked my wife, who was wearing the only Mavs shirt she owned, not out of love for the Mavs, but for me. I responded with a head nod as I pointed to my newly framed Sports Illustrated that was proudly displayed on top of our bookshelf.

The game itself was a blur. I remember Dirk struggled a bit, but Terry had it goin'. I also remember my buddy texting me halfway through saying, "TERRY, MVP?"

My buddy and I don't speak anymore.

When the fourth quarter rolled around, it started to become very clear that Dallas was going to win this thing. My Chicago friends began to trickle into our apartment to witness their die-hard Mavs friend experience the greatest sports moment of his life. I felt like an animal in the zoo and I didn't care. Things were getting surreal. My friend, Ben, brought a huge bottle of champagne but hid it from me so I didn't think he was jinxing anything. Smart man.

The moment inched closer and closer. It's happening. IT'S HAPPENING. AND......BUZZER.

I leaned back and put my hands on my head. I couldn't manage to say anything as my friends patted my back in congratulations. We had a pelican statue on a shelf that someone handed me because it kind of looks like a trophy. I held onto that pelican for the rest of the night.

My buddies showered me with champagne in the bathroom to avoid getting any furniture wet. I'm a champion, not an animal. 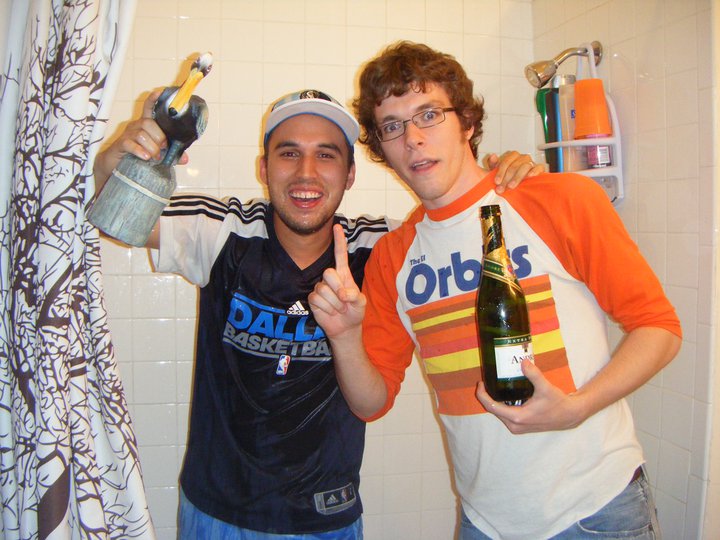 This was a top three moment in my life.

After all the confetti settled, my friends finally went home. I confess that I may have had a few too many drinks in a very short amount of time. Just before my wife went to bed, she kissed me and told me she was so very happy for me. My eyes were glossed over like I had just seen the second coming but didn't give a shit. I remember I was very close to crying when I responded, "we did it babe."

When she went to sleep, I stayed up watching reruns of SportsCenter. A commercial came on saying, "BUY DALLAS MAVERICKS CHAMPIONSHIP GEAR NOW!"

My wife and I actually had a conversation about this after the Mavs won the Conference Finals because I wanted to buy some merch to celebrate the win. At the time, we agreed to a $50 limit. I bought two T-shirts, which I later regretted because that's not how the 2011 Mavs rolled. They didn't care about some shitty Western Conference Championship. Poor Doris Burke couldn't even manage a postgame interview. To be fair, that was a rough postseason for Doris.

BACK TO THE GREATEST NIGHT EVER.

I opened the computer and went straight to NBA.com/shop. I was met with a beautiful home page full of Mavs championship gear - shirts, hats, jerseys, DVDs, jackets, bumper stickers and...OH MY GOD DOGGY T-SHIRTS!? This was heaven.

So I got to browsing, vaguely remembering that $50 limit from the Conference Finals. I remember rationalizing the fact that I should be allowed $100 because this was the Finals and by the laws of basketball physics (Finals = Conference Finals X 2). I began adding things to ‘my cart' like a champion (because I was one). After a while, I finally felt that I had enough and check out and went to bed -- without a care in the world.

There's a line in the beautifully depressing song "Lua" by Bright Eyes that goes, "What was normal in the evening by the morning seems insane." Every time I hear that line, I don't think of drugs, sex and substance abuse, like the writer had intended. No, I'm reminded of that championship night - me at 2 a.m. on NBA.com/shop. Heavy stuff.

The following day I woke up giving myself roughly four minutes to get up, out the door and on the train. I was a complete mess. My wife, god bless her beautiful soul, packed some ibuprofen in my bag knowing that I'd be needing it that day. She's too good for me. I got to work, looking/feeling/smelling like hell but that didn't matter because GUESS WHAT HAPPENED LAST NIGHT MUTHA BITCHES? My co-workers congratulated me as I cockily strolled in shouting nonsensical phrases like, "WHAT'D I TELL YOU!?" and "DID I NOT TELL YOU?!"

I finally sat at my desk and opened my laptop. The first thing I did was go to my email, like normal. There was mostly standard stuff, but one message caught my eye. It was an e-receipt from NBA.com. I vaguely remembered ordering some things, but the specifics were a bit blurry so naturally I checked it out.

I examined the receipt closely. As I read each line item out loud, I began to feel sick. Championship hat and t-shirt? That's fine. Championship DVD? Yup. Championship beach towel? Not so much. 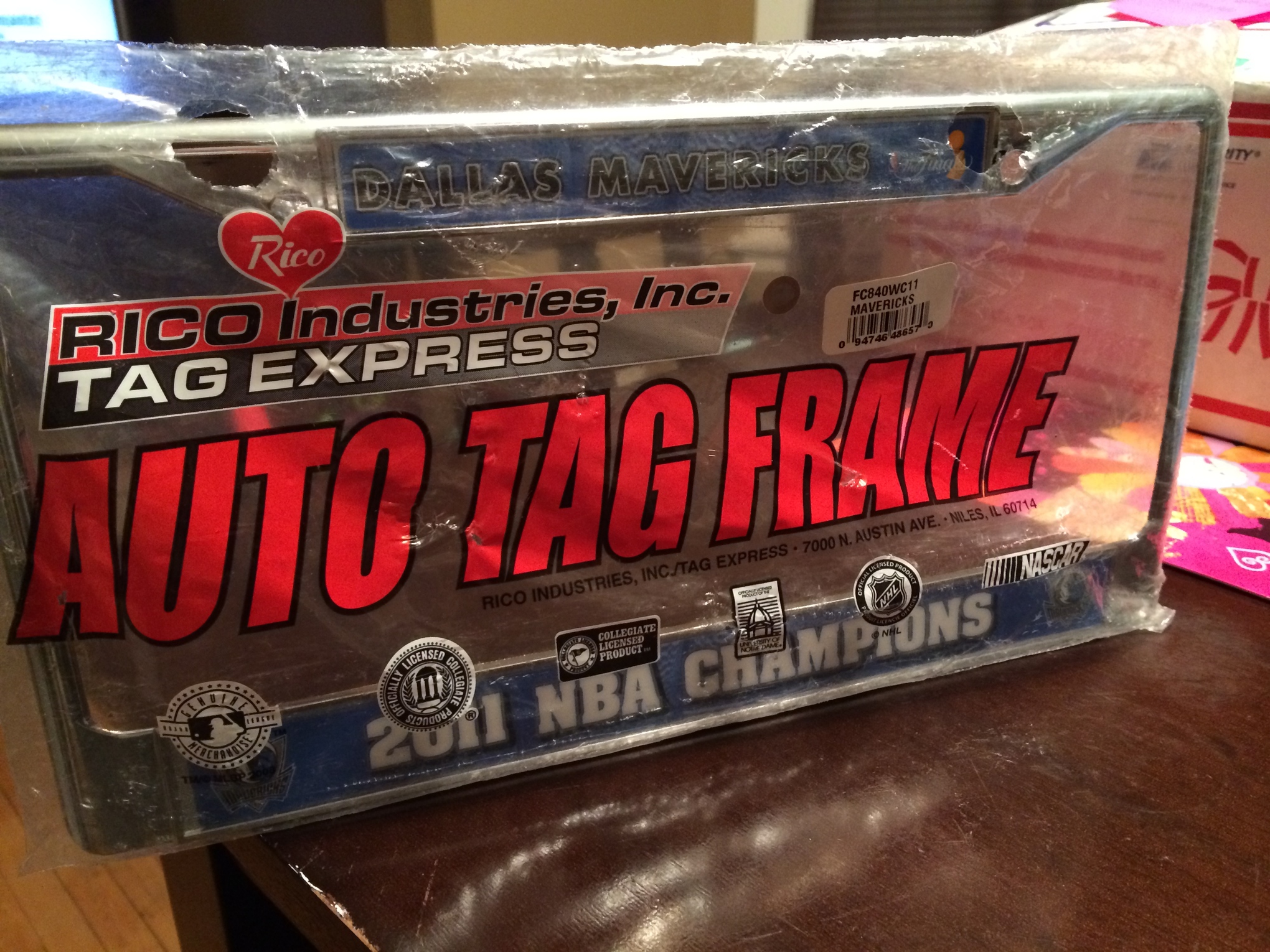 Did I really need this championship license plate border thing?

As I continued to scroll, it only got worse. Why did I buy a Tyson Chandler Fathead that wasn't even championship related? Are adults even allowed to own Fatheads? And tell me I didn't spend money on a freaking plaque with a commemorative championship coin. 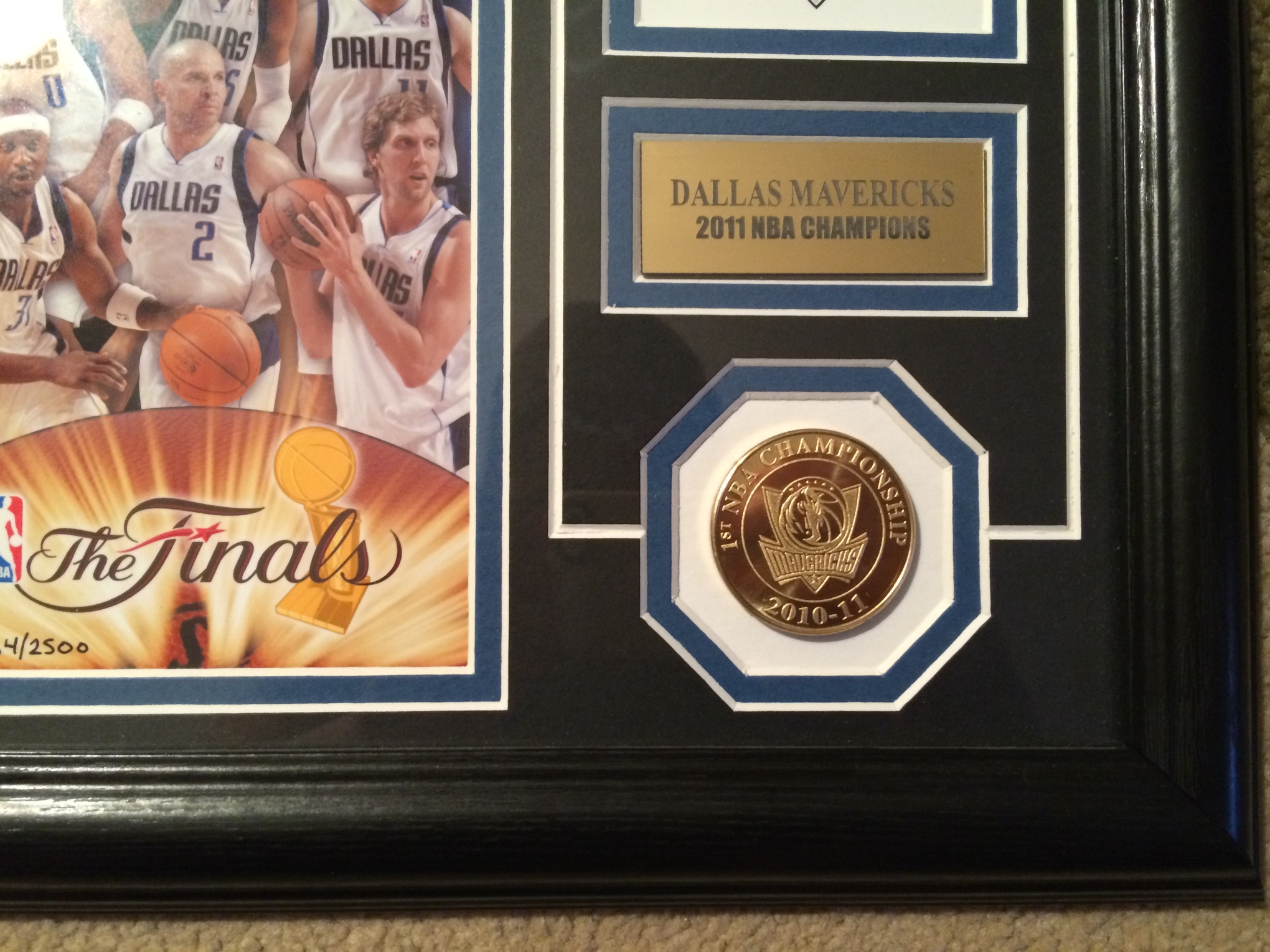 As I continued down the list, I prayed that somehow the coin had a currency rate of somewhere close to $648.00. I carried on reading through the list of pure crap I had purchased. Just when I thought I'd seen the worst of it, I came across the most unforgivable purchase of my entire life...A 2011 NBA CHAMPIONSHIP MOUSE PAD.

Just then, my phone started vibrating. It was a text from my wife that read, "Hey babe. What do you want for dinner tonight?"

The rest of the day, my stomach was in knots -- especially when I realized I had actually purchased two championship mouse pads. It's not that we were poor; we just weren't in any position to go all YOLO and purchase two championship mouse pads. As the hours and minutes grew closer, I felt worse and worse. I knew I had to tell my sweet wife about my Mavs spending spree. The high of this glorious sports moment had now been reduced to a mixture of anxiety and self-loathing. 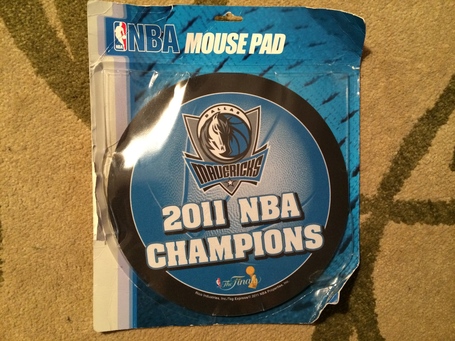 The moment finally came and I told her about the $648.00 lost on NBA.com. I even showed her the two mouse pads. What a shameful moment in our marriage.

My wife gave me the whole "I'm not angry, I'm just disappointed" routine, which was probably the best possible outcome me. She told me that she'd be doing the shopping the next time the Mavs win a title. I thought that was fair. We wound up giving away a few things as birthday gifts to family and friends. I can't remember which cousin got a mouse pad for Christmas but I'd like to take the time to formally apologize for that. 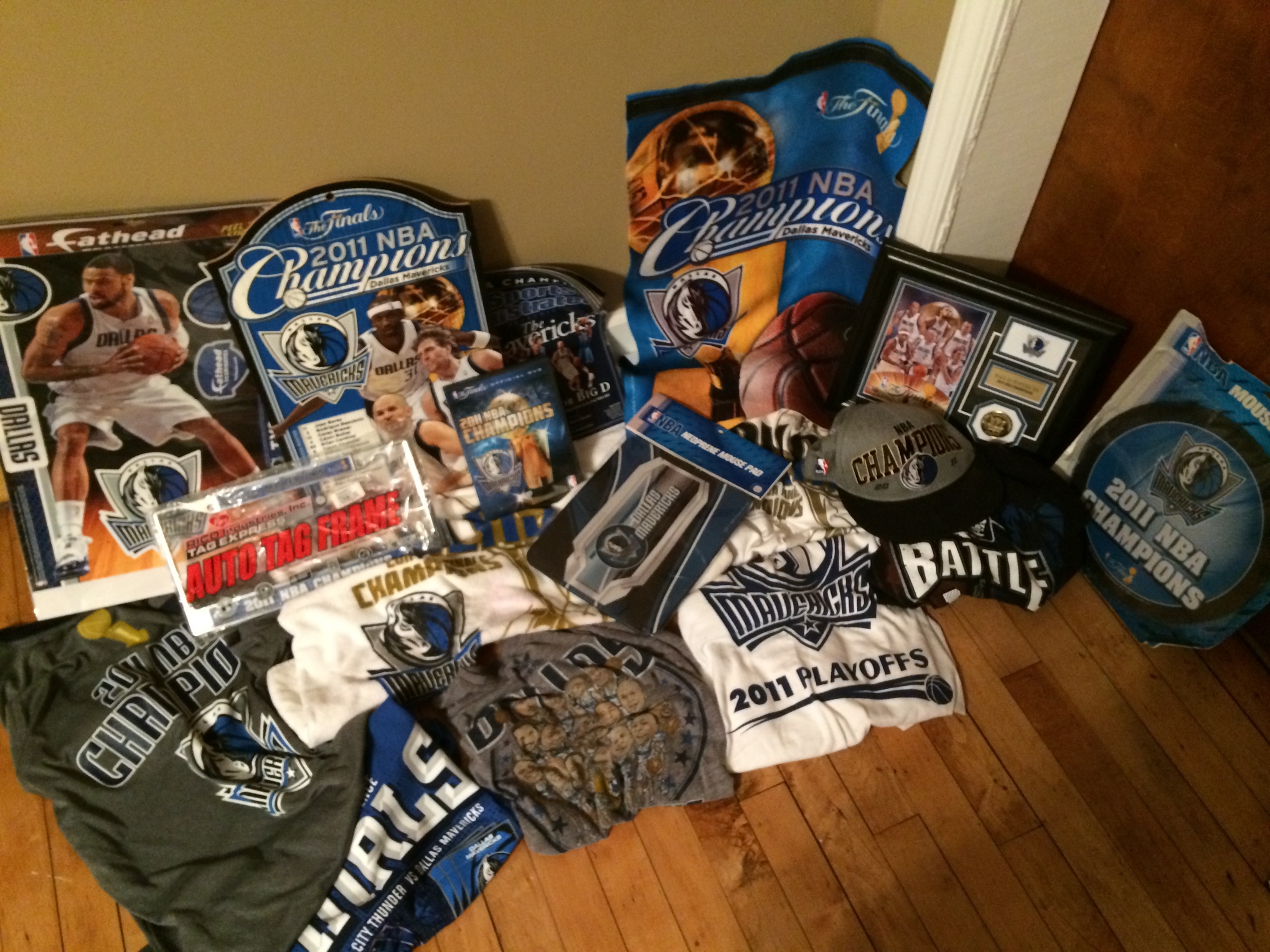 So what's the moral of this story? There is none. Or maybe it's something like, don't drink and shop on NBA.com/shop after your team wins their first championship in franchise history.

Ed. note: A special thanks to our friend Jason Gallagher for contributing to Championship Week. You can follow him on Twitter at @jga41agher and find more of his work on Ballerball.com, Grantland and Mavs Outsider.