A Cap Update, or, a Handsome Game of Chess

With the news that the Mavericks are looking to levy an offer sheet to Chandler Parsons of the Houston Rockets, an update on the Mavericks' cap situation

Share All sharing options for: A Cap Update, or, a Handsome Game of Chess

News broke recently that the Mavericks are working on an offer sheet to send to restricted free agent Chandler Parsons, recently of the Houston Rockets.

The Mavericks' timing on this decision, frankly, couldn't have been more fascinating, and the move to send Parsons an offer sheet may actually end up being the first major piece of the free agency game of dominoes, rather than the decision of LeBron James or Carmelo Anthony.

At the exact moment of writing this, however, it's interesting that the Mavs are planning on sending an offer sheet to the likely-to-command-the-maximum-contract Chandler Parsons, because they're actually, technically, slightly over the cap at the moment.

One reason is that the cap jumped a bit, but it didn't jump quite as much as everyone expected it to as of early revenue reports.

More importantly, though, Shawn Marion, Vince Carter, DeJuan Blair, and Bernard James are still technically taking up the cap sheet, at totals between 150% and 190% of their salary from last season. As far as I know, too, the Mavericks only actually intend to bring one of those players back.

The Mavericks came into this offseason way over the cap because of the enormous cap hold of Dirk Nowitzki. After the Mavs re-signed Dirk at 3 years $30 million, Devin Harris at 3 years $9 Million, and traded for Tyson Chandler, Dallas now sits at $70,500,795 in salary.

That's a lot of salary, but it's not difficult to clear. Shawn Marion's cap hold, in particular, is giant, and the Mavs can clear up a good amount of space by renouncing his Bird Rights, which takes away his $13.5ish hold on Dallas' salary, but also means that the Mavericks cannot re-sign Shawn over the cap.

If the Mavericks do the same thing with DeJuan Blair and Bernard James (and take on the resulting roster charges from freeing up roster spots), Dallas can have up to $11,514,005 in cap space with which to sign Chandler Parsons.

All of those moves are more or less formalities -- requirements by the NBA that basically don't have any real repercussions for the Mavericks (assuming that Dallas has no interest in retaining Marion).

For all intents and purposes, the Mavericks just have roughly $11.5 million in cap space flat out, without working on it. It's freeing up the rest of the space that gets tricky.

The only cap hold left after renouncing Marion, Blair, and James is that of Vincent Lamar Carter, and renouncing his rights is a bit more complicated than renouncing the rights of the other guys, mostly because the Mavericks are actually interested in retaining Vince.

Basically, Vince's cap hold right now is much greater than the Mavs are planning on spending on his contract next year: roughly $6 million. That's after he was paid only about $3.2 million last season, and he's looking to take a discount from that.

The bottom line is that the Mavs need to do something with Vince to open up the requisite maximum cap space to woo Chandler Parsons.

The thing is, Vince's hold is much, much greater than his actual salary will be worth. So, as long as the Mavs do something with Vince, they can free up close to the mini-max value that Chandler Parsons will go for (about $15.5 million, based on the cap leap).

Regardless of whether the Mavs re-sign Vince for above value (market value appears to be somewhere around $1 million), or even flat-out renounce him, Dallas can free up Parsons-sized room. 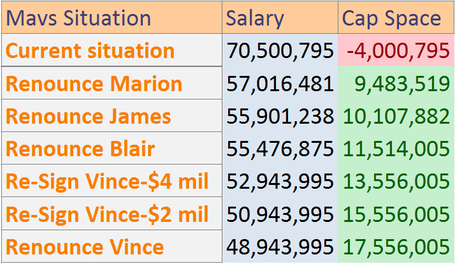 There is, as I'm sure you guessed, a wrinkle: Parson's restricted free agency is going to be tricky business, and it's a game of chess that Mark Cuban will have to negotiate carefully to come out of alive against Daryl "Chessmaster" Morey.

Chandler Parsons being a restricted free agent means that Houston can match any offer sent to them for Parsons. He can't walk away without their permission.

Mark Cuban making a vocal move for Parsons means that he's trying to force Daryl Morey's hand. Houston's plan in free agency, to this point, has been that they can open up close to maximum cap room by trading Omer Asik, Jeremy Lin, and detritus, and after signing Carmelo Anthony, LeBron James, or Chris Bosh, then they plan on re-signing Parsons over the cap using their Larry Bird Rights.

Dallas planning to throw an offer sheet throws a pretty big wrench into those plans, though.

Houston was banking on all the teams with cap space waiting until LeBron, Melo, and Bosh all made their respective decisions before moving on to Parsons. If no one moved on Chandler before the big fish made their calls, Houston could match any offer.

Now, Houston is up a bit of a creek. Offer sheets cannot be levied until July 10th, but given that Dallas' interest is already clear (especially given that Dallas almost never leaks information) you can expect an offer sheet will be in Parson's hand by midnight on July 10th.

If Parsons signs that offer sheet -- a very big "if" -- then Houston has three days to match. And here's the real catch: Parsons signing an offer sheet creates a cap hold of the size of the offer for both Houston and Dallas. 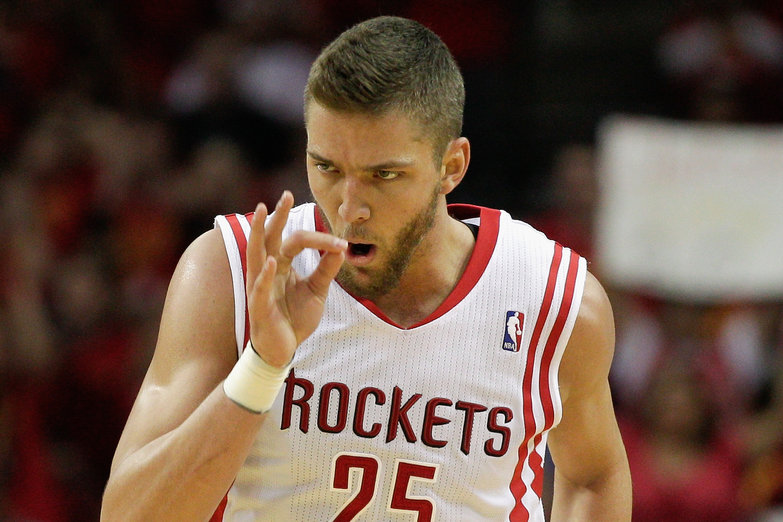 Essentially, if Parsons decides to sign the Mavs' offer, Houston then has all their cap room tied up in Parsons unless they decide to let him go to Dallas.

This forces Houston's hand. If Parsons decides to sign the offer levied to him by Mark Cuban, then Houston can no longer sign both a max-level player and Handsome Parsons. They have to choose one or the other.

They also, though, have to choose quickly so as not to lose out on Chris Bosh (or Carmelo) while their cap space is tied up. The need to rush the decision, combined with Morey's awareness that superstars are, historically, what make teams title winners, is the main reason I'm optimistic about the Mavericks' chances to get Parsons.

There are also some serious caveats here. First, for any of this to fall Dallas' way, Parsons has to actually sign Dallas' offer sheet to begin with, and frankly, it's unclear why he would actually do that.

Houston is probably a better situation for him than Dallas (even if the Rockets miss on a big free agent, the two teams are at least equivalent, and Parsons has made Houston home for 3 years now and uprooting a home is hard), and either way Houston can offer as much money as Dallas, thanks to the bird rights.

The only reason, as far as I can tell, that would motivate Parsons to sign Dallas' offer, is if they sent him an outrageous (read: maximum) offer sheet before any of the big fish sign.

Dallas' willingness to go after him and make him "the guy" in free agency -- plus Houston's inevitable reticence as they encourage him to wait until a star has signed -- might be enough for Parsons to believe that Dallas will care for him more than Houston. I imagine that it's hard to feel respected while you're told you have to wait for a better player to sign before a team considers you.

Unfortunately, though, if Houston has done their legwork, he may rebuff any offer that's made from Dallas, and re-sign with Houston on their terms when Houston's done hunting for the big game. That would be reasonable on his part.

Also possible would be that Houston convinces one of the big names (Carmelo or Bosh) to sign with them before July 10th, or, both make their decisions to go elsewhere. If that's the case, then Houston will have no qualms matching any offer that Dallas sends Parsons' way.

In the end, though, Dallas had to plan to offer Parsons an offer sheet as soon as physically possible. That always had to be the game plan.

It's been suggested elsewhere that Dallas' best case scenario on this front was that Houston lands a big fish and then they can't afford to pay Parsons, but look: re-signing Parsons to the max, even, after getting a big name free agent wouldn't even put Houston over the tax. Or, if it did, it would do so barely, and Houston has never indicated that they would balk at a little luxury tax payment, especially if the payment came with title contention.

The reality is that the only way to steal Parsons away was going to be trying to sign him before Houston could complete their maneuvering, and so that's what Dallas is trying to do now.

It's possible that Houston might balk at any offer about $13 million, which is probably above what Parsons is really worth. On the other hand, Houston can afford it, and they wouldn't be able to spend the money that they'll spend on him on anyone else, since it's all blocked off money over the cap.

If Dallas wants to really pry Chandler away with cash, the maximum $15.5 is probably the only way to do it.

Is Chandler Parsons' production on a basketball court, in a vaccuum, worth $15.5 million per year? Certainly not. His contributions are probably worth two thirds of that at most, and that's hoping that he continues to develop.

Look: NBA free agency is a bitch, and players almost never come at the value that they should come at. That's particularly true of restricted free agency. Teams have needs and there are only so many players who can fill those needs. In the end, teams end up having to pay a steep premium for players who fill a need where resources are scarce.

Chandler Parsons is an indication of that. He's exactly what the Mavericks need. An athletic, sweet shooting wing who can defend (despite the Rockets' reputation he's been very good at times) and who is young. It's literally everything in one package.

But none of those things come cheap, especially youth. Is he worth the max? No. Does he fill the Mavs' needs? God, yes. Does Dallas have the max? Yes. So, Dallas is going to have to cough up the dough if they're really interested.

Dallas will still have the $2.7 million mini-Mid Level Exception to sign someone -- another point guard, presumably -- and the rest of the spots will likely be filled out with some of the players on the Summer League roster.

Dallas' move to get Parsons today was a ballsy gamble, but it was literally the only one that they had. Let's hope it pays off.

Chandler Parsons is a Dallas Maverick