We at Mavs Moneyball discovered the real cause behind Dirk's "sick game" in the finals.

Dirk started waking up. He felt groggy and weird. He didn't remember falling asleep. Wait, did he miss the game? Where was he?

He tried blinking the dark spots out of his eyes, when he realized that there weren't any dark spots to blink out: he couldn't see anything.

He tried rolling over to figure out where he was when he felt a strain at his arms and legs. He couldn't move either.

He started wriggling as much as he could, trying desperately to break out of the ties that bound him, but eventually he gave up. He didn't know what day it was, but presumably he still had a finals game to play, and he couldn't risk hurting himself.

After another few contortions of his muscles, he realized that his mouth was uncovered. He started yelling for people.

"Hello?!" Dirk screamed. "Is there anyone here?! And if someone is there, why did you kidnap me and tie me up but keep my mouth uncovered so that I could loudly call for help?!!"

"You're not doing yourself any good." A mysterious voice said. It sounded to Dirk like the voice was behind him.

Dirk was trying to get this figure talking. He needed to find out who it was.

"You're talking because I WANTED you to talk. And you're not getting out any time soon. We've got you tied down to that metal chair with stainless steel chains. There's no way you're escaping here."

"You think I'm just going to give up all of our secrets?" The mysterious voice guffawed in response, "All I can say is that there's no way you're playing tonight. This series is going to the Heat. It has to."

Dirk was going through his rolodex of people who might do this to him, people who were that committed to seeing the Heat win. It couldn't be David Stern -- he would know that it would be too mysterious if Dirk suddenly disappeared. It would look fishy.

Maybe Flo Rida was behind this? He was from Miami, and had caught the club not handling Dirk a few times too many.

The mysterious voice spoke up one more time. "We promised the world championships, and we will deliver."

Suddenly, there was a loud bang from a distance away, presumably from down the hall. It sounded like a gunshot.

"DIRRRRK! DIRK, WHERE ARE YOU?!" The source of the gunshot sounded from down the hall.

"Drats! Fiddlesticks! How did they find you?!" LeBron cried.

"Jason! JET! Is that you?!" Dirk screamed. He struggled some more in his chair, trying desperately to make enough noise for Jason to be able to find him. LeBron ran and covered Dirk's mouth. LeBron held him down, trying to keep Dirk from rattling the metal chair against the tile floor, but it was too late.

Jason Terry rounded the corner and found himself in the doorway of a large room, one that looked almost like an empty hospital room. The floor was the same off-white, awkwardly designed tile with bare beige walls. When he came into the doorway, he gasped at the sight of Dirk chained to a chair.

As soon as he saw Terry, LeBron rushed at him, trying to prevent Terry from accessing Dirk, the same way that Bron prevented defenders from rushing to the basket countless times.

Terry flashed the gun that he had brought just in case to try and make LeBron get out of his way. It was enough to keep LeBron from tackling apparently, but not enough to make The King give JET full access to the chained Dirk Nowitzki.

"Come on man, let me through. I'll shoot." Jason said.

"You shot someone! Jesus Christ, I know you have a quick trigger and all, but learn some self restraint, man. Holy crap."

"Well, no, I shot a lock. The guys helped me sneak in here to bust you out, but the door to this hallway was bolted shut. I'm sure the guards that Pat Riley has hired heard, so we have to get you out quick. I can explain everything later. Bron, get out the way."

LeBron laughed. "You won't shoot me, I'm LeBron Freakin James. You think everyone won't know that you shot me? You can't do that!"

"But I'm turning around!" Dirk yelled, "you can shoot my chains we can get out of here! You're a great shot!"

"But what if LeBron blocks my shot and I shoot him?"

Jason lined up his shot with LeBron James right in his face, he fired, and he nailed it. Dirk's chains flew from his hands and against the wall.

"Well, that doesn't seem like it would be physically possible for the chains to go flying that far, but cool!" Dirk exclaimed.

"See you tonight!" Jet smiled in LeBron's face, while James' face scrunched in dissatisfaction. He sent a quick jab in Bron's direction and Bron sprawled out across the floor.

"Come on, lets go!" Jet called. "The rest of the team is in position to help us out of here!"

"How did you find me?" Dirk asked, as they ran down the hall.

"It was all coach. Did you know that Rick is actually Jim Carrey?"

"Yeah, and it turns out Ace Ventura was a true story, and he has some experience doing detective work. It was really weird, but long story short, after some unfortunate incidents with a randy rhino, RickJim managed to figure out that you'd been kidnapped by Pat Riley, LeBron, and Dwayne Wade and that you were being held a couple blocks from the AAC in an abandoned warehouse. The whole team is here to rescue you!"

At that moment, the Dallas hometown heroes busted through the doors at the end of their hallway. Tyson Chandler came running up to meet them. Through the door, the hallway continued straight down and to the right.

"Guys, go right, go right!" Tyson called. "Kidd and JJ managed to control the floor, and get all of Riley's guards coming down this way. Run down that way, and I'll block em all. No one gets past me. Ever."

Both Jet and Dirk rushed to the right, where they hit another cross in the hallways. A set of the guards rushed up to meet them.

"We can take em!" Dirk said. Still, he was starting to feel really tired. He didn't think he had energy to take 3 buff security guards on, even if he had a foot on most of them.

Suddenly, DeShawn Stevenson crashed through the wall using the sheer force of his head. Screaming like a wild, ferocious, and possibly drunk lion, DeShawn cleared the room in 3 quick movements.

Jason started to say something, but Dirk just grabbed Jet on the shoulder, "he's got the crazy look." Dirk said, "come on, lets just go." Jason nodded and ran on, again to the right. Meanwhile, DeShawn ripped off his shirt and hauled down in the other direction.

Dirk and Jason could see the light at the end of the hallway where the service doors to the complex were. Suddenly, a figure stepped out in front of the door.

"Damn it!" Dirk wheezed. He was having a really hard time catching his breath, but he couldn't put his finger on why. 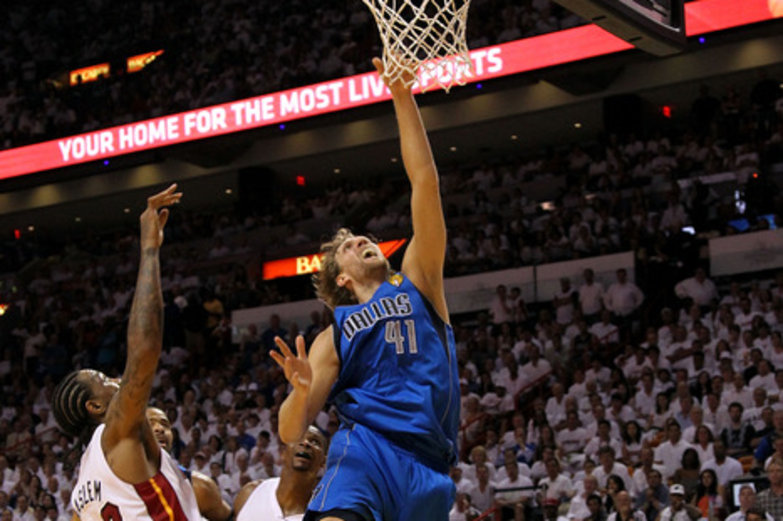 "Do you really think we'd let you get to the stadium that easily Dirk? This series will be mine. I will win...again!" Dwayne Wade took one step close to Terry and Dirk.

"That's right, Dirk! We can't let you guys get the chance to tie up the series tonight. We're winning tonight. I can't let you leave here." Wade stood impassably.

Dirk wheezed one more time and lunged at wade, running towards the front doors. In his rush to get out, he lightly nudged D-Wade on the shoulder, sending Wade flying into the wall beside him. Jet rushed behind Dirk.

As they opened the door, Wade called, "you can't win!"

Dirk stopped and turn around. "You can't stop me. This is my year."

Wade called back, "no. You see, while you were tied up, we poisoned you! You can't get away, you can't win tonight!"

"No, but you'll be too sick to get out of bed for the rest of the week! We're going to win! We were always going to win!" As Wade settled back onto the wall he'd flown into, he cackled desperately with pride.

Dirk started to feel faint, but he held up three fingers, like he would every time he hit a three-pointer. "We'll see," he said.

RickJim ran up with the trainers in tow, calling at Dirk. They had work to do.

Later that night, with 12 seconds left Game 4 of the finals, after hitting the layup to win the game on a heavy dose of poison, Dirk took one more look at Dwayne Wade.