Because we all love the Big German

Dirk Nowitzki is Dallas' favorite sports icon, and he should be. Dirk is the best thing to ever happen to Texas, probably.

Upon reflection, the Germans have really given Texas a lot: kolaches, fast cars, Schlitterbahn (the best waterpark the world has ever seen), and Dirk Werner Nowitzki. It's a good list.

It just seemed appropriate, during the down season, to celebrate some of the statistical achievements of the most objectively lovable superstar in the league. We love you, big guy.

Efficiency has always been Dirk's calling card, long before "efficiency" was a buzzword in the NBA. Dirk has had three seasons now where he's scored well over 20 points per game with a True Shooting Percentage over 60 percent. 60 freaking percent!

In his MVP season, he averaged 25 points per game and a 60 percent True Shooting Percentage with Avery Johnson as coach. Dirk wasn't even shooting threes! And, hey, remember that game in the playoffs where Dirk scored 48 points on only 15 shots? That was fun.

But anecdotes aside, we also know that Dirk is an eventual first-ballot Hall of Famer, so how does his incredible efficiency stack up against other legends and eventual Hall of Famers?

For one, Dirk had a remarkable number of seasons in which he scored over 22 points per game on fewer than 19 shots per game. This might not sound like a huge accomplishment, but lets look at the list of stars who have done it a comparable number of times to Dirk: 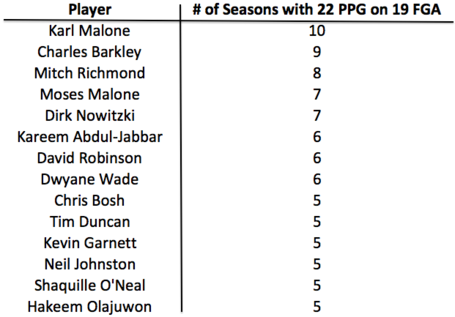 See, it's a fairly short list. And look at those names!

Dirk is also on the short list of players in the 50/40/90 club -- a distinguished group of players who have finished a season shooting above 50 percent from the floor, 40 percent from 3, and 90 percent from the free throw line. Dirk, Larry Bird, and Kevin Durant are the only forwards in the group, who join Steve Nash, Jose Calderon, Reggie Miller, Steve Kerr, and Mark Price.

That list gets even shorter, though, when you look at players who have had a 50/40/90 season while also registering a PER above 25:

The thing about 50/40/90 is that it's just an efficiency measure. It's an incredible accomplishment no matter what kind of player you are, but to have a season with that kind of efficiency and still contribute with volume to an offense is borderline impossible.

Consider these similar measures of efficiency in scoring relative to volume; Dirk is on the short list of players to have a career True Shooting Percentage of above 58 percent (hyper-efficient), and register greater than 150 Win Shares in his career (volume).

Similarly, he is one of very few players to have several seasons with a True Shooting Percentage above 60 percent while scoring 20 points per game with a 20 PER. 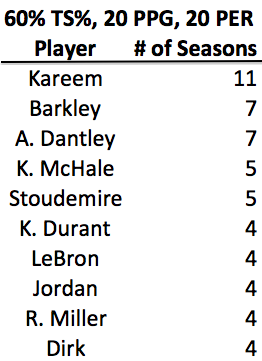 I mean, Win Shares in general are a pretty broken statistic that don't explain much beyond "this guy did vaguely X amount of damage during his career," if they even can explain that much...but look at that freakin' list.

Independent of what Win Shares actually describe, you have to be really damn good to have that freakin' many of them, and Dirk did that while also being hyper-efficient.

Just for funsies, here's the list of top 10 players of all time, by the Win Shares (with the caveat that, again, Win Shares don't mean much and that it tends to way over-bias big men): 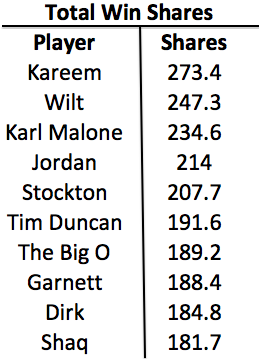 Dirk should at least finish his career seventh, ahead of Oscar Robertson. Maybe even fifth, above Stockton, depending on how long Dirk can keep the engine going at a high level.

Besides, he's already first in our hearts.

Dirk won his first championship, off of one his best seasons, when he was 32 years old. Since, he's still only been slowed when faced with knee troubles. The man is unfazed by time.

You may have forgotten that Dirk finished last season within half of a percent of 40/50/90, an accomplishment only 20 other players can lay claim to...at age 35. AND, at that age, he's still scoring more than 20 PPG. That's insane.

It's easy to forget quite how old he is, but Dirk, in basketball terms, is really old. Like, for reference, here's a list of players who are younger than Dirk:

Like, he was a top 15 scorer last year, and he was one of the most efficient of all the scorers, even at his age. Check out this graph: 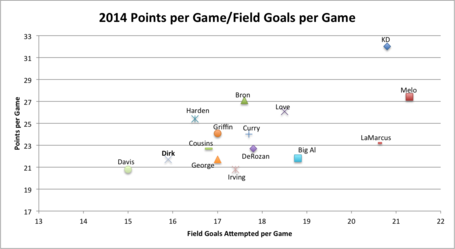 This is a graph of the most basic possible measure of efficiency among the top 15 scorers in the league last season, or, the points scored by the shots attempted.

Note, players who draw a lot of free throws, in particular, will do really well by this measure.

Dirk fits in the group very, very well, even at his age.

Now, look at the same measure of efficiency, but graphed on an axis by age: 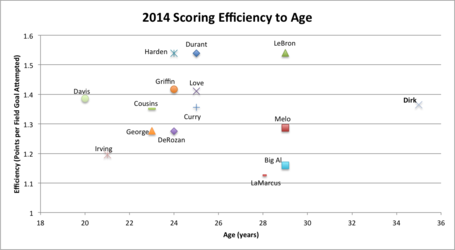 LOOK HOW MUCH OLDER HE IS. LOOK AT IT. AND HE IS STILL MORE EFFICIENT THAN HALF OF THOSE GUYS.

Dirk is just a monster, for whom age has no meaning. A beautiful, German monster.

The only other team whose best player was above the age of 35 last season was the Spurs, with Tim Duncan. Unless you think their best player was Tony Parker or Kawhi Leonard, in which case, it was just the Mavericks. Just Dirk.

Don't age next year either, big guy. The team needs you!

Because how could I not? I tried to pick some of my personal favorites that highlight his efficiency, and one that was just plain fun.