How Parsons scores the ball.

Historically, Shawn Marion is a player who very rarely had plays run for him -- he just knew where to be and what to do. Despite a dramatically different skill set, new Maverick and Marion replacement Chandler Parsons is someone similar in that area.

Last season, more than half of Parsons' offense came in transition and off spot-ups, two mostly unscripted areas that allowed Parsons to use his offensive skills to create. With two elite players, that's all the Rockets asked from him.

To see how Parsons scored his points, I watched a couple hours of film and picked up on some noteworthy offensive trends.

(note: all stats via MySynergySports, all gifs are my own.)

As you'd expect from a 6-foot-9 forward with dribbling skills, Chandler Parsons is a great transition player. The first defensive player back for any given team is usually a guard, but with his size, Parsons can easily elevate over smaller ones and twos.

Parsons is very aggressive on fast breaks -- after all, he generates almost a quarter of his offense there. With the ball in his hands, he's comfortable rebounding the ball and taking it the length of the court.

This isn't to say he's selfish in transition, but he's definitely looking for his shot, both with and without the ball in his hands. Parsons took 72 3-point attempts in transition last season, usually by sliding to the corners or finding an open spot on the wings. Although usually one of the first players sprinting up the floor, Parsons will occasionally trail a fast break and look for the top of the arc 3-pointer. 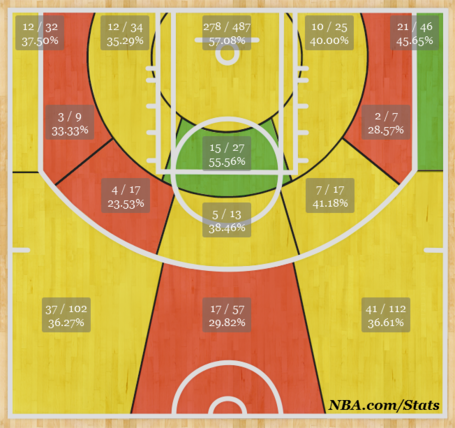 Great from the corners and good from the wings, Parsons fits a typical statistical mold of a shooter. He releases the ball high over his head with a little bit of a windup over his right shoulder and a natural fade. You'll find some quicker releases, but with his size, the speed of the shot usually doesn't matter.

What stands out to me is where Parsons spots up, often five or six feet behind the 3-point line.

Take the above still. This is a half court situation with about 14 seconds on the shot clock, but Parsons is preparing for the catch well beyond the 3-point arc. Sometimes, he'll take the deep 3, but usually it's used to step into a shot or fly by a defender.

Jeremy Lin does a good job with his pass, placing it in front and letting Parsons hop into it. He misses the shot pretty brutally, but he did this often last season.

Parsons is already starting to attack as he catches the pass. Instead of hopping into the shot, Parsons is able to use his momentum to blow a closing defender. Since he isn't the most explosive athlete, little tricks like this help him beat his man and get to the rim.

Here's another wrinkle in his deep spot ups. He has the range to hit 3-pointers from that distance, forcing the defenders to take his excellent pump fake seriously no matter where he is on the floor.

That play also shows off his floater, a shot he's excellent at. If you'll remember his shot chart at the beginning of this section, the upper part of the paint was one of his two "green" zones.

Dwight Howard wasn't wrong when he said he and James Harden were the two best player in Houston, and Chandler Parsons did a great job complimenting their elite talents. When he was asked to create plays on his own, though, that's where he showed his current limitations.

The isolations are unavoidable for a player with more than 2,700 minutes last season -- many of them were the product of a low shot clock. Since Parsons combined to make 13.3 percent on his 3-pointers when you combine isolation and pick-and-roll ball handler situations, he's definitely better off avoiding pull-up 3s.

What he can do attacking out of a pick-and-roll is much more important for Parsons as a player, and also to see how he can improve his game in the coming years. I don't think he needs to take a step forward on offense right away, but this is where he has the opportunity to do so.

Considering he's a good shooter, he's oddly uncomfortable with the mid-range shot. Per NBA.com's stats, he shot 33.3 percent in the 16 to 24 foot range.

Parsons is able to get this mid-range shot whenever he likes, but as you can see, isn't particularly great at hitting it.

But with the long strides of his 6-foot-9 frame, Parsons is better at getting to the rim. Because of his floater, it doesn't matter if he's stopped a little short. However, his floater shouldn't be an excuse to avoid contact from a big man. Parsons only draws fouls on 6.3 percent of his possessions, and a lot of those are on the perimeter after getting his man in the air on a pump fake.

Consider the way Parsons attacks off this pick-and-roll, fading away for that floater, and then his teammate Harden.

In both instances, the pick-and-roll ball handler comes over the screen essentially isolated against a dropping big man. Instead of fading, Harden draws the foul by going into him.

Harden's foul-drawing tendencies are well known and not for everyone, but Parsons could probably steal a few tricks from Harden's book, especially on drives like these.

Parsons has developed as a passer since coming into the league, increasing his assist percentage from 11.7 percent his rookie season to 17.3 last year.

It's not hard to imagine Tyson Chandler or Brandan Wright on the receiving end instead of Asik and Howard.

OFF SCREEN / HAND OFF

Parsons was excellent after receiving a hand-off last year, although I'm not sure how much that really means -- it's not a career trend and he only had 91 such possessions, which isn't a huge sample size. The hand-off often initiates a quick pick-and-roll set, like below.

In other instances, Parsons will rub his defender off the big man to attack the rim, or find himself open for a 3-pointer if his defender gets caught.

The most common screen Houston used for Parsons was a double pindown with him coming baseline. It was such a small part of his offense that there's not much ease you can extrapolate from his attempts.

Parsons is a player with clearly defined strengths, and all the Mavericks are asking of him is to transfer those skills to a new offensive system. His real opportunity to improve in Dallas will be on the defensive end, so why don't you come back next week and we'll take a look at the other side of the court.