The Mavericks, basketball and having fun again

After a crazy offseason, the Mavericks have reminded us about a crucial part of basketball -- it's fun.

Share All sharing options for: The Mavericks, basketball and having fun again

Basketball, inherently, is pointless. Well, in the grand scheme of things, anyway. After all, it's just dudes throwing balls through hoops.

It doesn't matter. I mean, sure I guess some of it matters in the sense that basketball teams are a business and people have jobs depending on if they win and lose. But that's about it. It really doesn't matter.

We use it as an escape from those terrible things that matter more. It's important to discuss and attempt to fix the issues at hand, but it's also important to step away, clear your head and enjoy life. That's what basketball is for a lot of us. That's what it's really all about, if you dig to the core of it.

This summer the Mavericks reminded us to have fun, because we certainly needed it.

I don't know when this shit started, but we hate a lot of things. So much so that we kind of enjoy it. I want to blame Twitter, but I'm sure the hate has always been there and Twitter just allowed us to share our hatred with each other, congregate and mesh our hatred into one giant ball of negativity.

There's just so much of it out there, especially in basketball Twitter. Why are we so mad all the time? Why do we care who's overrated or not? I get that it's fun to rank players and discuss team strategies in regards to team-building, but when did it become some crusade for some people to defend certain points and opinions like we're clinging to the last life boat on the Titanic?

It's crazy. Are we that afraid of being wrong? I don't get it. This off-season was pretty much a bunch of people shouting about why they're right and everyone else is WRONG. TERRIBLY HORRIBLY WRONG WHY WOULD YOU EVER THINK THAT BLOCKED.

And for Mavericks fans, it was so, so easy to hate. Since the 2011 title team disbanded, no one has been happy. We endured a painful first round sweep, the first playoff-less season in what felt like two decades and a constant disappointment in failing to land a star free agent.

A rant on the 2013 offseason haters 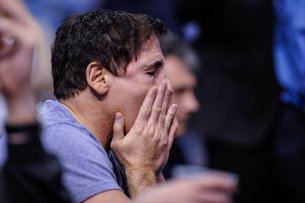 The moves ended up netting the Mavs the eighth seed in the West. But it did more than that. It gave casual Mavs fans a reason to get excited, a reason to enjoy basketball again.

Us hardcores? We're watching anyway. But it's those casual fans, the ones who like sports but won't live and die by the Mavs, that needed to be reengaged. Sure, Monta Ellis might be just the same player he always has been but in a better situation, but damnit, people got excited! Brandan Wright might have his limitations on defense, but he's an athletic marvel who soars above the rim! It's fun!

Not only was it fun, but the Mavs almost pulled off an historic upset of the league-best Spurs. In fact, those Mavs were the only team to push the Spurs to seven games in the playoffs in what ended up being the Spurs most difficult series as they marched to another title.

So despite that first-round loss, we were still pretty jazzed about the Mavs. Dirk proved he was still an elite player, Rick Carlisle proved he's the best coach around past Gregg Popovich and Monta Ellis was exciting. Yet, basketball Twitter told us not to have fun. Why should you be excited about an eighth seed that lost in the first round, they told us.

I answer with another question: why not? Honestly, what's the point of all of this then, if to not get excited, if to not have fun? Yes, Mavs fans, let's all just get serious and pout in a corner that the Mavs were only an eighth seed and their loss to the Spurs was meaningless.

If that's the case, then let's not even watch. If the only way to be validated as a fan is your team winning the title, you're gonna be pretty damn upset for most of your life. In the NBA, only SIX teams have won a title since 1999 (Spurs, Lakers, Pistons, Heat, Celtics, Mavs). Of that six, two of those teams (Lakers, Spurs) won 10 of the last 15 titles. So yeah, it's REALLY HARD to win in the NBA.

So you have to enjoy the little things. Like watching a team surprise you by pushing the eventual champs to seven games. Like watching a small guard drive you mad and deliriously happy all within the course of a single game.

Basketball is only a game. It makes people lots and lots of money. Because the only real point to basketball (and sports) that has any real-life significance is the business aspect, I can understand where Mark Cuban is coming from when he wants to maximize the profits of his workers that are under contract for his organization.

I can also understand why these players should have the right to do whatever the hell they want, like representing their country. Within the utter pointlessness that is basketball, this debate is even more pointless -- we're arguing over millionaires being able to play basketball internationally and whether rich guys should be even richer.

Yet somehow, it devolved to this over the summer:

@mcuban Your financial investment in a person does not make that person your property. That's not how America works (this century).

HOLY SHIT. IT'S JUST BASKETBALL YOU GUYS. IT'S GUYS THROWING BALLS THROUGH HOOPS.

I don't stand with either end of this argument. I get why Cuban wants to make money off players he employs. I also get why owners shouldn't be able to dictate every part of a player's life. BUT IT'S STILL BASKETBALL.

Let's just fucking enjoy it, alright? Why are we so mad?

And that's awesome. Listen, we can debate about whether the Mavs overpaid Chandler Parsons or whether they're a title contender in the loaded West. That shouldn't deter the enjoyment of what is probably the most successful (or at least exciting) off-season in Mavs history. 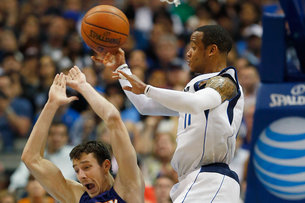 They got younger. They got more athletic. They got more talented. After every rumor hit Twitter this summer, a buddy would text me about it. We'd text about how anxious we are to get Parsons or how happy we are that Tyson Chandler is back. It was neat. It was also excruciating.

Because we didn't have a lot to be excited for before the 2013 season started. It made us realize we probably took for granted how awesome the Mavs fifty-win, making-the-playoffs-every-stinking-year run was. We could be Charlotte fans. Or Washington fans. Or Milwaukee fans. Or Sacramento fans. Or Philadelphia fans. Or Minnesota fans.

Will the Mavericks win a title this year? Almost assuredly not. But that doesn't mean we still can't have fun. I'm glad that this past season and off-season reminded us of that.