Recapping Championship Week and all 14 stories about the 2011 Finals

Did you miss anything during Championship Week? Here's a recap of all the stories.

Share All sharing options for: Recapping Championship Week and all 14 stories about the 2011 Finals

Last week, we went back to 2011 and remembered the time the Mavericks won the NBA Championship. Here's the link to our main hub with all the stories, but we're going to do one better: every article is linked in this article here, with a brief description.

We'd love for you to share this on social media and with your friends, family and fellow MFFL's. We think it's totally worth the look back, and even if you were checking in with MMB during the "actual" Championship Week, you can definitely still enjoy these stories no matter when you check in.

The hard is what makes it great

If you read anything from Championship Week, read about Dr. Lewis Pincus, told from his son Josh's perspective as his father battled cancer and fought for his life. The Mavericks made their title run at the same time, and for Josh, the two are inseparable. It's beautifully written and a fantastic tribute to a great man and MFFL.

How not to fall in love

Three years ago, Rebecca tells us how she turned on a Mavericks game for the first time, and just like that, she was hooked. It was love at first sight. Three years later, and she credits that Championship run as the moment she became a fan.

Dominant juggernaut or scrappy dark horse: which do you prefer?

In the 2010-11 season, we remember vividly the squad that won the NBA Championship. Sometimes, we forget that there was another version of that team, similar but slightly different, that dominated the NBA in the first couple of months and looked to be something special before disappearing with Caron Butler's season-ending injury. Bailey pays tribute to that squad.

Going to the movies with the Mavericks and Blazers

The lowest point of the 2011 playoffs must have come on April 23, when the Mavericks blew a 23-point lead and let the Blazers tie the series up at two games each. For friend of the site Bobby Karalla, that day just happened to be his last day at his high school job, and tested his faith in this squad that he knew was different from years past.

The single greatest night of my life

For all of these stories, we went back to 2011 to recall games, events and players. For this story, we literally went back to Mavs Moneyball in 2011 and got then-manager Lisa Rotter's account of being in Miami and partying with the team after their Game 6 win. If you're the jealous type, might want to avoid this one, because her life is way cooler than yours.

Maybe Dirk's sick game wasn't an accident? Hal Brown imagines a world where it was an evil plot developed by Dwyane Wade and LeBron James, because honestly, is that really that hard to believe? If for no other reason, read it for this line: "Suddenly, DeShawn Stevenson crashed through the wall using the sheer force of his head." More than any of us, Hal shows he truly understands Stevenson. 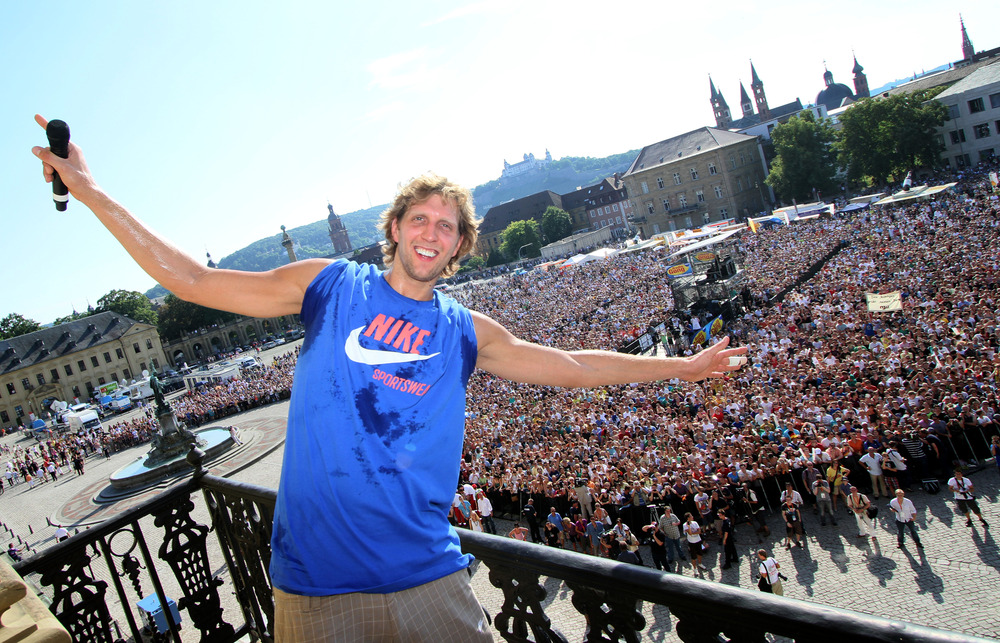 The script of the Dallas Mavericks' 2011 championship

There's so many stories here, both that we wrote about and that we didn't have time or space to do so. Championship Week did it's best, but nothing can truly account for the sheer number of stories that intersecting and congregated for one perfect moment, as Dirk finally lifted a trophy over his head.

Jason Gallagher is already a funny guy, and when he combines it with a hilarious 2011 Finals anecdote, you get absolutely gold. This is a fantastically fun story about buying some Dallas Mavericks gear. That's the only teaser I'm going to give. Just go read it.

This is why the 2011 Championship was so great. DeShawn Stevenson was a key role player. Ian Mahinmi had one of the most memorable shots of the entire playoffs. And then there was little-used Corey Brewer, joining the Mavericks late in the season and jumping off the bench to help his teammates to a comeback win over the Lakers in Game 1.

The under-appreciated player in the 2011 Finals run: Rick Carlisle. Kirk looks at the way he juggled the role players that we just talked about, putting them in situations to succeed, is just remarkable. Really, just look at how effectively Ian Mahinmi and J.J. Barea contributed, then went to other teams and contributed next to nothing.

You can never talk about Dirk too much, and Bobby Karalla contributes a second article remembering back to being in the arena and learning Dirk was battling illness in a Finals game the Mavericks had to win. Of course, because he's Dirk, he came through in the final seconds with a layup to put the game away.

Statsketball: The "lightning in a bottle" champions

Hal Brown takes a statistical look at the NBA Championship squad -- at their ridiculous offensive output and how it lined up with other championship contenders throughout the years -- with a special edition of Statsketball. Also, it has some dope-ass charts, and everyone loves dope-ass charts.

Celebrating Championship Week with an ode to Jason Terry

This was an article Josh Bowe wrote in 2011, a couple months after the championship, and it's a fantastic look at the man known as JET through his years on the Mavericks -- starting back in 2006 and traveling to the moment he stood on the podium after Game 6 as an NBA Champion.

All these words aren't enough? Here's the 86-minute official NBA video about the 2011 Mavericks and their title run.

Thanks for joining is our nostalgia. It was well-worth it.