Positional Strength: Ranking the Maverick power forwards with the rest of the West

Best in the West? It's not the Mavericks, but they come close in this ranking.

Share All sharing options for: Positional Strength: Ranking the Maverick power forwards with the rest of the West

Editor's note: This is part four of a five-part series breaking down the Mavericks at each position, as compared to the rest of the Western Conference. Here's last week's version.

I've written plenty of things about Dirk. I know a lot about him. Probably too much, he'd say, ever humble, but such are the perks of running a Mavericks blog.

And still, yesterday, I saw something new. I've been told time and time again how hard it is to block his shot. And then I see this photo. 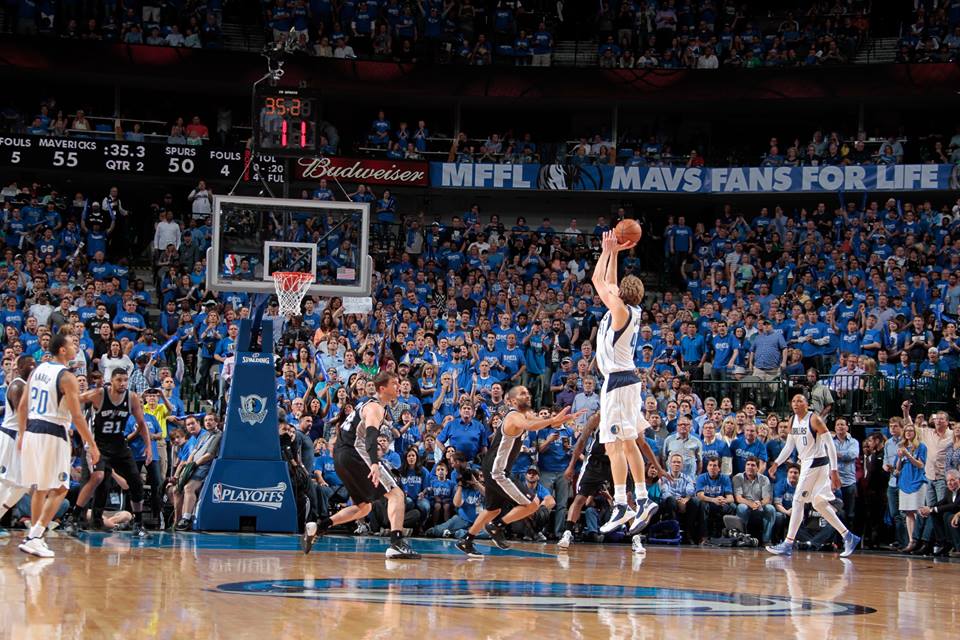 Look at how high that release is.

Sure, sure, the angle helps. The perspective makes Tiago looks smaller in the background, blah blah blah.

But jeez, just LOOK AT IT. There's always new observations and realizations you can make about Dirk, and that was my revelation for today. Instead of repeating the same things I've said about him over and over, it's neat to find something new, even if it's just a photo showing me something I know.

Anyway, looking beyond him at the power forward depth, Brandan Wright is also a Maverick who will play some power forward. He's pretty awesome, in case you forgot.

Charlie V will probably make the team, or if not, Rashard Lewis might be along a little later. Neither are suited for a full-time spot in the rotation anymore, but in a pinch, they can be a floor-spacing four in the Mavericks offense for six minutes or so.

1. Portland: LaMarcus Aldridge is fantastic, just fantastic. Terry Stotts has been a very lucky man when it comes to coaching power forwards. I think Thomas Robinson is real solid in a backup role for them, too.

2. LA Clippers: The strides Blake Griffin took last year, especially stepping up for an injured Chris Paul, were incredible. Of course, he's backed up by Big Baby Davis, so there's no way the Clips could put him above Portland.

3. New Orleans: I was under the impression Anthony Davis was more of a center, and he might be in five years, but he's actually played three-fourths of his minutes at power forward so far in his career. With Omer Asik in the fold, he's clearly going to play there for the most part this season.

Even when he's filling in at center, he's got Ryan Anderson filling in behind him. New Orleans probably won't finish over .500, but I'm fairly confident they can beat any team in the league on any given night.

4. Dallas: Because Charlie Villaneuva is the fourth best power forward in the league, don'tcha know?

5. Oklahoma City: Players who are elite shot blockers and who can hit jumpers past 20 feet don't come along very often, so take a minute to appreciate Serge Ibaka's skill set and pour one out for Spain, who fell to France yesterday.

6. Denver: Where did Kenneth Faried come from in this World Cup? Beats me. If you think about it, though, Denver and Team USA aren't too different. The Nuggets have a couple of excellent guards that a lot of the offense will go through, and a couple of centers who quietly but efficiently get work done.

7. San Antonio: Tim Duncan and Matt Bonner, best friends forever? Another year of getting it done in a slow but steady manner.

8. Golden State: Ugh, I don't know what to do with David Lee. He probably belongs up here, but I have to resist the urge to drop him and the Warriors by five spots. I couldn't do that to Draymond Green, though -- he's too fun.

9. Memphis: You see certain types of players tend to group together in these positional rankings sometimes, like this duo of David Lee and Zach Randolph. Both have pretty big question makes stemming from their age. Who knows what ends up transpiring.

10. Minnesota: Thad Young is a pretty nice player and I personally still have moderately-high-but-falling-slightly hopes for Anthony Bennett.

11. Utah: Is Derrick Favors going to figure it out? They also have Trevor Booker and Jeremy Evans, which seems rather redundant. And Steve Novak, which is cool. And apparently someone named Jack Cooley. If they could only combine all of those players together...

12. Houston: I like Terrance Jones, but I'm unsure how he's going to handle being thrust into a starting role. Montiejunas will play here a bit, and he's another alright player. But for an 82 game season, I'm just not quite sure that's the duo you want.

14. Sacramento: This just isn't a good roster. Sorry, Sacramento, but Jason Thompson, Carl Landry and Derrick Williams is so, so underwhelming.

15. Phoenix: Some P.J. Tucker, some Markieff Morris and a little Anthony Tolliver? Those guys fit the roster well and won't weigh the others down, but individually, they just aren't great.