Share All sharing options for: Sorting Through Dallas' Positional Logjams

With the exception of Dirk Nowitzki, most of the players on the Mavericks' starting roster could be replaced by similarly quality players. The result was a strong starting unit backed by one of the best benches in the league.

The 2012-2013 roster, interestingly, had a similarly strong bench relative to the rest of the league. That team was also bad. The team was so impossible to watch, too, in part because the bench was almost better than the starting lineup, and neither set of lineups were really "winning-team-in-the-NBA" caliber.

The reason I mention all of this is that I'm starting to develop a concern regarding the nature of the depth of this new roster, and how lineups and minutes have to be distributed to make it work.

To pre-emptively ward off the predictable response: I don't think that next season's team will be anything like or even approaching the 2012-2013 team, and I'm -- like most -- very optimistic that the team will be better than last season's, even.

Nonetheless, I'm here to bring a little bit of skepticism to the table, so hear me out.

Here's a point to start with: players who are genuinely elite at one or two specific skills are more effective role players than players who are fairly good at many different things. Every time.

In that sense, despite the defensive problems, Jose Calderon was a "better" role player than Devin Harris. He was a worse fit for the team, ultimately, because his defense was bad enough to make him and Ellis untenable together, but as a top 10 pure 3-point shooter in the league and an elite player at taking care of the ball, he has serious value as a role player. Harris, by comparison, was versatile and talented but not as good of a "role player."

For that reason, even if Calderon wasn't necessarily the "better" player for the team, there was always such a distinct difference between Caldy and Harris' skillset that the two were not interchangeable players.

The same applies to Samuel Dalembert, DeJuan Blair, and Brandan Wright. One was (theoretically) a more generally valuable player (Dalmebert, who could defend, rebound, and score fairly well) (in theory), one was a rebounding expert, and one was a scoring expert.

Again, Blair and Wright had particular value as bench role players by being elite at particular talents, but those skill sets did not really overlap.

What resulted was a strong bench, but also fairly naturally delineated roles, and that's essential.

The Mavericks will be headed into next season, though, with a strong bench, but one that might have less clearly delineated roles in several different places. There could be several different logjams, which has some pretty large implications to the team at large.

Consider, to start with, the skillsets of Devin Harris, Raymond Felton, and Jameer Nelson. All three are players who specialize in driving and kicking, who rely on their speed, and who like to take off-the-dribble jumpers when given space on the perimeter.

Of the three, Jameer Nelson is the most different, skillset-wise. He relies much more on his jumper (both spotting up and off-the-dribble), and stays more on the perimeter than he gets inside. He also shoots fewer midrange jumpers.

Still, the similarities between his and Devin's efficiency shot charts are (in some ways) uncanny. 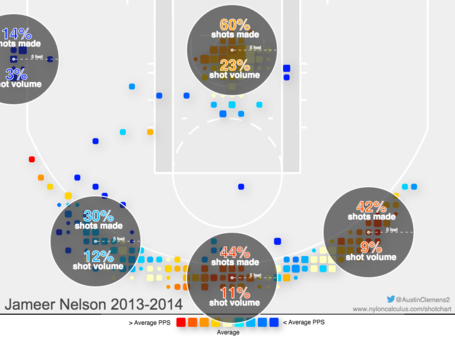 Notice Jameer's focus from the perimeter. Also consider how he finishes at a below-average rate at the rim. 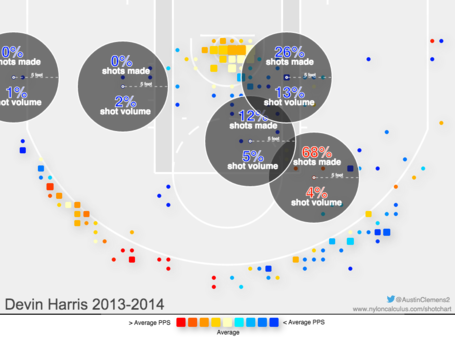 Per the shot charts, roughly 25 percent of Harris' shots come from places where Nelson is uncomfortable shooting, either from mid-range or from floater range. Beyond that, though, the shot volumes are roughly similar: both players specialize on above the break threes and at the rim, and both players struggle to finish at the rim.

Nelson's added efficiency from three is a bonus, but it's not something that makes the players indistinguishable from each other.

Still: Devin is a good defender and Nelson isn't. Nelson, too, is a good shooter and Devin is only effective when he's spotting up from three.

In that sense, Devin probably has a more "general" skillset (especially when you consider his effect on the court geometry) and Nelson is more of a "specialist," but that line is really, really thin with these guys. 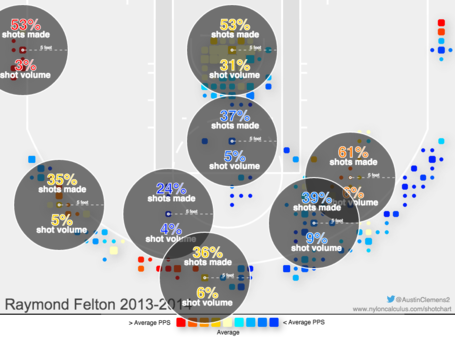 Really, Felton's chart is almost identical, except his percentages are even worse (he's so bad from three that the shots are actually less efficient than a mid-range jumper, which is really hard to do), and he's somewhat active from the corners.

So the roles these guys will all play is remarkably similar, almost too close for comfort. Here's the good news, on this front, though: the front office has said that they still want Devin to come off of the bench, and he'll likely spend a decent amount of time as a 2-guard, which neither Jameer or Felton will probably do.

That means that Nelson and Harris should be able to coexist a little bit better. Nelson can be the shooter, Harris can be the "energy guy." As well, Felton is worse enough than both players that he should only really play when Harris and Nelson are too worn out.

However, if Nelson is a worse shooter than advertised, or if Felton rebounds from a terrible year last year, then there's a real logjam at this position, without a great enough talent or skill disparity to keep any given player from deserving time more or less than anyone else.

That would be bad for the team in a few ways: lack of continuity, as players shift in and out without real rationale; bad team morale as all the point guards get grumpy; lack of versatility around which to structure different lineups with different weapons. All of that could ultimately hurt Dallas' offense at every single point in the game.

Then there's the Aminu-Crowder conflict. Both are young players who are stellar defenders who can cover wings, some point guards, and power forwards -- and who can't shoot. If Crowder finally develops and NBA 3-point shot, then we won't be having this debate at all during the year, but presuming that he doesn't, then this is another logjam.

What to Do With Jae Crowder 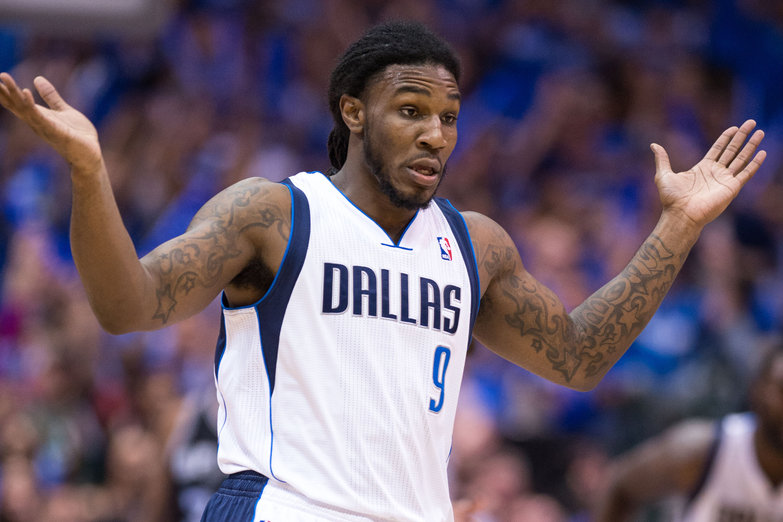 This is a particularly interesting one, too, because they do have slight differences, but none drastic enough to change their ultimate role.

Aminu, for one, is a better passer and rebounder by a decent margin, which theoretically should make him a more valuable role player (presuming that Crowder's improvement in both areas during the playoffs last season wasn't permanent).

On the other hand, Crowder's RPM (ESPN's value that determines a player's individual contribution to team's +/- without the influence of teammates) is pretty noticeably higher, and Crowder has always had an apparently disproportionately positive effect on the Mavericks, relative to what appears to be a very limited skill set.

When placed under the tutelage of Rick Carlisle, Aminu might make some leaps that render Crowder irrelevant. On the other side of that coin, Crowder may actually learn to shoot, which would make Jae invaluable. The point remains, though, that barring unpredictable improvement, the two fill the exact same role.*

So, it's fairly obvious that there is certainly going to be a minutes battle between these two for the 5-15 minutes per game that they'll fill at wing behind Parsons, Monta and Richard Jefferson, and it will be a quiet storyline for at least the first quarter of the season.

There's Brandan Wright and Greg Smith, too, working as general backup bigs. Both are hyper-efficient finishers around the basket and pick-and roll specialists.

Smith has a less versatile range (no jumper, no floater, less athletic) but is a better rebounder, but again, they'll likely be fighting over minutes behind both Dirk and Tyson for a decent chunk of the season. Wright should get an automatic edge in any minutes battle by virtue of his prior success on the team (and being more polished in general), but that doesn't mean he'll get the minutes that he wants or deserves, either.

Any kind of minutes distribution battle isn't a good thing for team morale, and it's even worse if its compounded with other minutes battles (at point guard or backup big), and there could be a lot of fighting over minutes for a lot of the season.

That's not to say that the Mavericks' lineups are facing an oncoming disaster that Dallas is doomed to run into. Really, the Crowder-Aminu and Wright-Smith conflicts will be trivial, at most, and shouldn't majorly affect anything.

The real question is whether or not there will be a fight for the point guard position. Given that there should be room for both Devin and Jameer to get 30ish minutes each, since Devin should spend a lot of time as the backup behind Monta, even PG shouldn't be too much of a mess.

Still, if the point guard situation becomes a point of serious contention (which is absolutely possible, if not likely), then the other two minutes battles could look a lot uglier, and it could make the Mavs' hyper-versatility look a lot less versatile, and a lot less threatening.

And, look, the starters on this team are more or less set, and they're good. They should be about as good offensively as last season and better defensively. The Mavs aren't going to be floundering, here, positional logjams or not.

But I've also been on the record as trying to inject a little bit of caution into all the offseason ecstasy, and this is a good time to point out that Dallas' roster for next season isn't as neatly delineated as it was last season.

There are just a lot of players with similar talent levels playing similar roles, and that can get messy fast, especially since managing logjams is not exactly Rick Carlisle's expertise.

The players that the Mavs picked up are, for the most part, better, but if when they see the court they're fighting for minutes -- or don't have a good sense of what they need to be doing -- that might mitigate a lot of the potential improvement.

Watching to see how easily distributed the point guard minutes become is going to be a big thing to watch this season, as it will probably quietly determine how the culture around this Mavs team feels for a lot of the season.

*And, for what it's worth, I'm rooting for Crowder in this one. There's something to the fact that no one but Mavs fans seem to be aware of his existence that makes me really root for him. Like, he's our secret, hyper-confusing conundrum of a player and I don't want some transplant from the Pelicans coming in an taking his spot on the team, gosh darn it.