In today's Five Out, we talk about NBA 2K player rating leaks, Chandler Parsons wanting to be in Spain with Team USA and a Tyson Chandler interview.

1. 2K SHOWS DIRK LOVE: NBA 2K15 is nearly upon us and a Dallas Mavericks roster has appeared to leak onto the internet. Here's the photo: 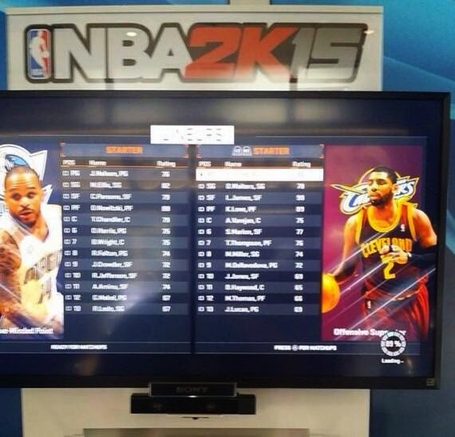 Since that's difficult to read, here are the rankings (h/t to the Real 2K Insider)

2. AN ALL TOO SERIOUS RATING ANALYSIS: Well, in case you aren't a 2K gamer, you should know only four players have a rating 90 or higher in this game: LeBron James (98), Kevin Durant (95), Chris Paul (not sure yet) and Tim Duncan (90). Duncan seems strange at first, but considering he's coming off a title and it's not too strange, even if he probably shouldn't actually be rated higher than Dirk.

Dirk's 88 comes after being ranked 83 last year, clearly low. We'll see how 2K boosted the rating, perhaps by increasing his block and steal stats a little more than they should have -- historically, Dirk's game hasn't done well with the math behind overall ratings. Other 88's include Russell Westbrook and Tony Parker. Kevin Love is an 89 and Serge Ibaka is an 84.

2K likes Jameer Nelson as the starter over Devin Harris, giving him a one point overall edge. The game also doesn't seem to be too worried about Raymond Felton's bad season last year with New York, putting him right in the area. I know it's just a video game, but having three point guards separated by four points points to what Hal Brown wrote about Dallas' positional logjam.

Jae Crowder is the biggest leap, moving up +8 from last year after another year as a solid contributor, and Brandan Wright was a +7. Meanwhile, Monta Ellis dropped two points for some reason, from 84 to 82. (Apparently, the overall rating factors in defense more than previous years, so maybe that's why?)

Shane Larkin is a 72, if anyone's wondering.

3. OK, OK, ENOUGH 2K: In yesterday's Five Out, we mentioned that Mark Cuban told Chandler Parsons he didn't want him playing, although maybe not in those exact words. That's a story we're going to keep an eye on, because league rules means you can't hold a player from participating in a national squad except for injury concerns.

But regardless of his new owner's feelings, Chandler Parsons reiterated that he definitely wishes he was with Team USA in Spain right now.

"I'm rooting for them," Chandler said after the former pitcher and shortstop, wearing a Rangers home white jersey with his name on the back, fired in a strike. "As much as I wanted to be there and was frustrated about it, I'm still cheering for them."

5. KARALLA ALERT: Friend of the site Bobby Karalla wrote something about the returning Maverick players and it's worth a read.