Once upon a time, Kris Humphries played for the Mavericks

Remember that time the Mavericks had the other Kardashian affiliate on their team?

Share All sharing options for: Once upon a time, Kris Humphries played for the Mavericks

If anyone in Dallas ever bothers to think of Kris Humphries, it's probably the same way the rest of the country does: as the ex-Mr. Kim Kardashian. If anyone in Dallas thinks just a little longer about him, they'll probably feel relieved that the Mavericks unloaded him just before he caught Kim's eye in 2010, leaving it to the New Jersey Nets to contend with his pop culture clusterf*** of a personal life.

But the much-maligned Mr. Humphries deserves more. Maybe not a lot more, but after relatively unremarkable tenures in Utah, Toronto, and Dallas, Humphries grew into his own, playing some of the best basketball of his career in New Jersey, despite his busy reality TV filming schedule. I won't argue that Dallas fans should regret a trade that helped bring Tyson Chandler and an NBA Championship to Dallas, but his talents are certainly worth a little "what if...?"

Humphries came to Dallas in the middle of the 2009-10 season as part of a four-team trade that included four-time All-Star Shawn Marion. Humphries was never going to be the focus of that transaction, and he didn't do much to attract attention to himself on or off the court while he was in Dallas. That all changed once he got to New Jersey, started dating Kim Kardashian, and we all got to know him a little too well. Have you ever wanted to see an NBA role player brush his teeth? Were you super curious about Kris Humphries's sleep habits?

If the only NBA Top 10 list Humphries ever landed on is any indication, then no, you were not. He, along with fellow Kardashian spouse Lamar Odom, was voted among the most hated players in the NBA that season, an honor the two shared with players better known and reviled for their basketball talents and where they chose to take them.

But while fans were busy getting to know and dislike Humphries, he was busy being pretty awesome on the court. His performance tapered off a bit after the team moved to Brooklyn (though it picked right back up when he was traded to Boston), but during his first two seasons with the Nets, he was outstanding, averaging a true shooting percentage well above 50% (it was above 55% during the 2010-11 season) and grabbing more than 15 rebounds per 48. Whatever your preferred advanced metric, he was playing well-above-average basketball and for just $3.2 million a year. 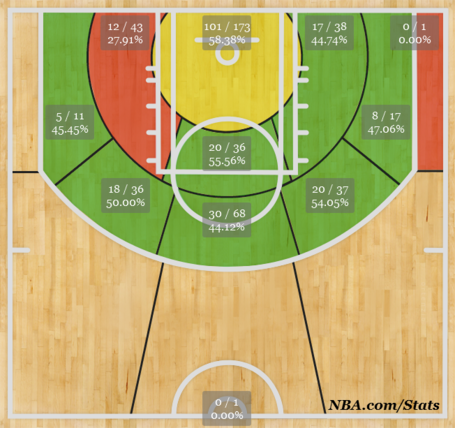 Humphries isn't an ideal or particularly well-rounded player. His shot chart shows that he's never been more than an average finisher at the rim but instead has a penchant (and a talent) for old-school long twos. When you consider that Humphries was traded shortly after his arrival for Eduardo Nájera, who was sent shortly after that to Charlotte as part of the trade that brought Tyson Chandler to Dallas, it seems like ultimately helping land Chandler was perhaps the most useful thing he could've done for the Mavericks.

But while it's hard to argue with the NBA championship Dallas won the season after trading him, it's almost as hard to look at the circumstances surrounding his departure and not wonder what could have been. In 2010, Humphries was only 25 years old and had a year left on his very favorable $3.2 million salary. Things worked out phenomenally well for Dallas following that trade, but what about the next year or the next? With just a little more youth and a little more depth to build around, would Cuban still feel like he had to blow up the team to rebuild almost from scratch? Would it have meant a playoff appearance in 2013? Would the team have made it past the first round since the championship?

And most importantly, did we miss our chance to see Mark Cuban's guest appearance on Keeping Up With the Kardashians?