Positional Strength: Where the Maverick centers rank among other Western Conference teams

Tyson Chandler & co. are the best thing the Mavericks have had at center since the championship, but how do they match up with the other 14 conference opponents?

Share All sharing options for: Positional Strength: Where the Maverick centers rank among other Western Conference teams

Tyson Chandler has returned. Two years removed from a Defensive Player of the Year award, he's clearly a much more mobile and versatile defender than anyone on the Mavericks last year. His pick-and-roll defense stands out because even at 7-foot, he has the ability to make the occasional switch onto a guard or quickly hustle back and be in position to make a play after showing hard.

The Mavericks were bad at defense last year, so his impact in that area is what we've focused on all season, but his impact on offense will also be felt. He's a good finisher and understands how to get open on a roll to the rim. For a mostly non-shooter, he does an excellent job with his free throws. Samuel Dalembert was a bit of a spaz on offense at times, but Tyson is really the exact opposite. Chandler rarely, if ever, throws up wild shots. He doesn't jack from 20 feet just because he was left open. He knows not to lead a fast break like, um, a certain Mavericks center.

Behind him are two remarkably similar players, Brandan Wright and Greg Smith. Wright has established himself for his elite skill of scoring the ball around the rim. It's not the only thing he does -- shot blocking comes to mind -- but his finishing ability is what keeps him in the league.

Greg Smith is also a fantastic finisher, although probably not from the heights Wright soars to. He's bigger than Wright and won't get pushed around as much, even if he's not an incredible defender or anything.

Bernard James seems to be back again as an emergency big, and it's always great to see that guy succeed.

The advantage last year's rotation brought was a diverse mix -- Wright was the offensive specialist, Dalembert could do a little bit of everything and Blair was a rebounding expert. Rick Carlisle won't have as many options to tinker with lineups as he loves to do, something that Hal Brown talks about a little more in depth right here. But while flexibility is good, becoming more talented is better, and the Mavericks did that this summer at center.

2. Sacramento: #Boogie4America! This photo is so great. 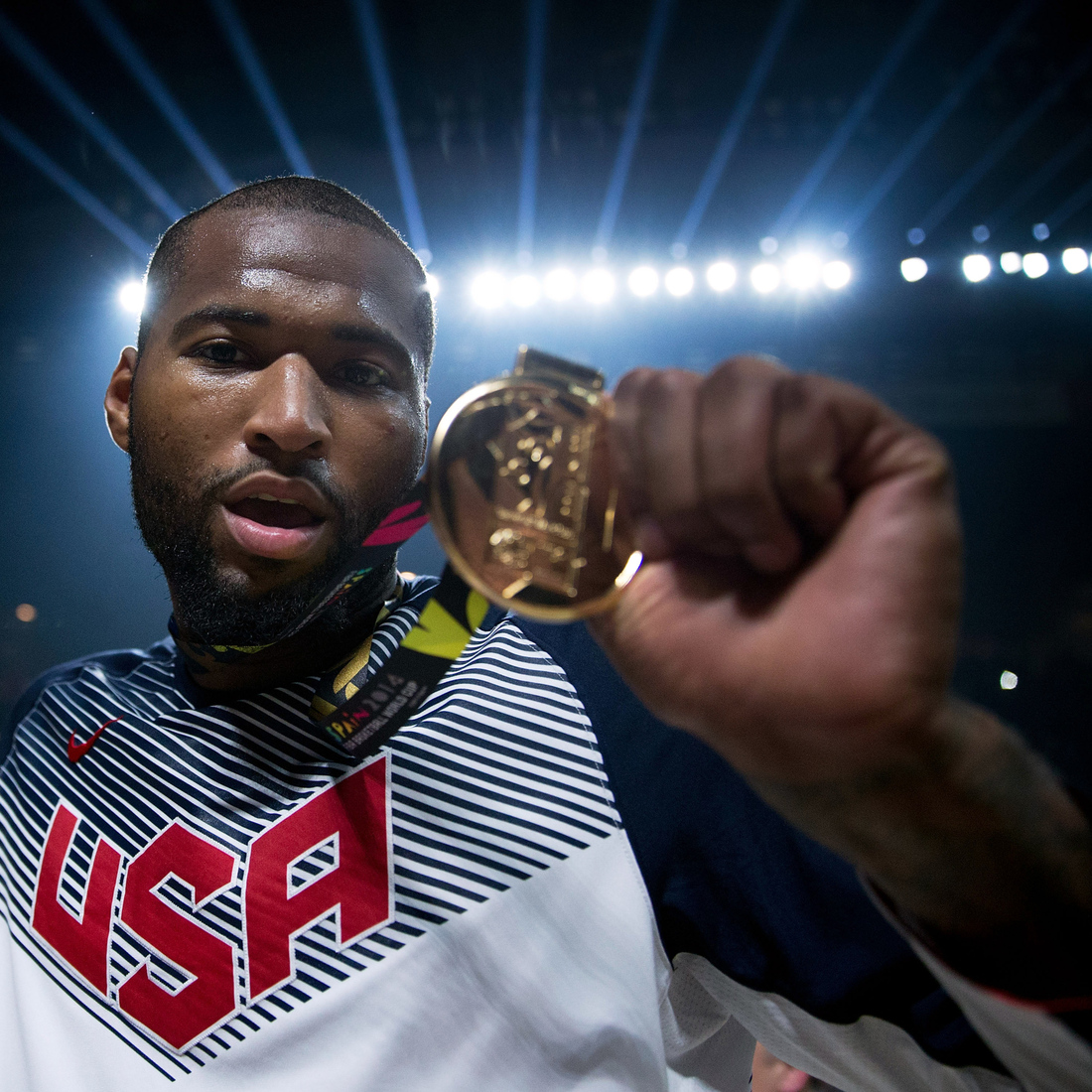 3. Memphis: Marc Gasol is a cool cat. I am sad he and Boogie didn't get to play against each other in the FIBA World Cup finals.

4. LA Clippers: DeAndre Jordan is 25. He averaged 14 rebounds a game last year. He shot 67.6 percent from the field for about 11 points a game. He blocked 2.5 shots a game. He averaged a career-low in fouls per game and a career-high in minutes. Sure, I can make more free throws out of 10 than he can, but during actual game action Jordan is terrifying and terrifyingly young.

Spencer Hawes is a nice complimentary backup for the Clippers as a 3-pointing big, something they don't have right now.

5. New Orleans: If the Pelicans outperform expectations, it'll be on the brunt of their fantastic frontcourt. Omer Asik is a starting center once again and will do his thing. Anthony Davis will shoulder the load at power forward and probably get some minutes at center. Ryan Anderson's back there just chilling.

6. Dallas: So here we are with Tyson Chandler & co. For those wondering, the Mavericks finished no. 10 at point guards and no. 4 at shooting guard, small forward and power forward. Does that seem fair? Let me know.

8. Portland: They have Robin Lopez, yeah, and he's great. But Chris Kaman behind that? This may not end well, like, not at all.

9. Golden State: Andrew Bogut was created to ball out at basketball and be perpetually injured, so this ranking really depends on which one he does more of next year.

10. Denver: If these rankings are accurate at all (probably not), Denver is looking to be a playoff team. They finished no. 6, no. 7, no. 7 and no. 8, in order of position -- and that's even with my tragically low ranking of Aaron Afflalo (I'm sorry Aaron!).

This season, they have a trio of Timofey Mozgov, JaVale McGee and Jusuf Nurkic. God, why didn't my parents have the nerve to name me Timofey instead of Timothy? Forever a missed opportunity on their part.

11. Minnesota: I still have questions about Gorgui Dieng, although man oh man he was great at the end of last season. Pek is Pek, an average center who doesn't defend real well. The hope of this position is in the rise or fall of Dieng.

They also have Ronny Turiaf for some reason?

12. Phoenix: I don't actually have much to say about Miles Plumlee and Alex Len. It's unfortunate they lost Channing Fyre, who was a perfect fit in Phoenix.

13. Utah: Still too much potential, too little actually accomplished for the Jazz. Do something, Enes Kanter! Build on that World Cup performance, Rudy Gobert!

15. Oklahoma City: It's 2011. Kendrick Perkins is traded from Boston to Oklahoma City. "Ah, a solid veteran player. He really isn't starting material, but Oklahoma City is a young team and can upgrade in the offseason."

It's 2012. Oklahoma City is preparing for a Finals run. "This team is really solid, but just wait until they get a really great center in here -- will anyone else in the league even have a chance!?"

It's 2013. Harden is gone and Perkins is not. We chuckle at basketball's oddities, but this is just a minor blip in a game that otherwise makes sense. Or at least that's what we tell ourselves every time Kendrick Perkins misses a layup after perfect ball rotation develops from a doubled teamed Kevin Durant.

It's 2014. WHY GOD. WHY IS KENDRICK PERKINS STILL STARTING. DO WE NOT UNDERSTAND BASKETBALL?

It's 2015. Thanks to Perkins, basketball has began to fall into chaos. As a result, society is crumbling across the earth. Everything is in shambles. The end is near.

Steven Adams is on the bench and maybe Mitch McGary can do more with the Nick Collison role than Collison did, but c'mon Sam Presti.