Appreciating what new Maverick Aminu can bring to the table.

Manager's note: This week, we will be publishing trial posts from our MMB finalists. With almost 100 applicants, thanks to those who sent an email. This piece is by Kate Crawford; enjoy!

It may not be LeBron going home or even Chandler Parsons coming to Dallas, but Mavericks fans have plenty of reason to be excited about the signing of Al-Farouq Aminu, a cheap defensive specialist and excellent rebounder who's also an improving offensive player just heading into his prime.

Last season, Dallas boasted one of the oldest teams in the NBA, and though they have a well-deserved reputation for getting a lot out of their older players, even the savviest of teams with the best of training staffs needs players with a longer upside than Vince Carter. Aminu fits the bill. NBA players typically peak in their mid to late twenties, so getting a solid 23-year-old player who's made his rookie mistakes but still has a lot of years left at the top of his game is a great move for a team like Dallas.

And not only is he young, he's healthy. His minutes have been steadily increasing over the years, and he's capable of providing substantial support without any history of worrisome injuries. The other promising thing about his increased playing time is that it's been accompanied by steady improvements in almost every category. His assist to turnover ratio has improved, and he's managed to slightly increase the number of steals he gets per 48 while fouling less frequently.

His rebounding, always good, has also improved over time. Aminu provides an extra two inches of height compared to the outgoing Shawn Marion, and he makes good use of them, snagging more than 11 rebounds per 48 minutes (Marion, historically a good rebounder, managed just under 10 last season).

That brings us to his shooting. Al-Farouq Aminu is admittedly not very good at shooting, as almost anyone who's ever written about him is quick to point out. Still, there's reason to be optimistic. Aminu's problem is pretty specific: he's bad at three-point shooting (this past season, he shot just 27%). But look at this shot distribution chart: 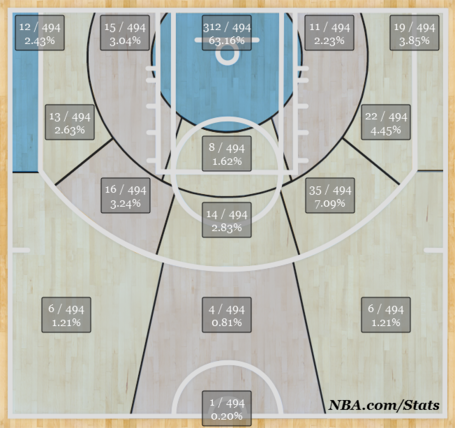 It's sometimes used to illustrate his problems on offense (and there are certainly problems), but I think it shows something else. Aminu knows that he's bad at three-point shooting, and he doesn't do it very often. In fact, as his minutes have gone up and his two-point field goal percentage has steadily improved (a correlation which is far from universal and is on its own a good reason to like the guy), he's taken fewer and fewer three-point shots. He's gone from jacking up almost five per 48 his rookie year to barely one this past season. And while that brand of basketball smarts guarantees we won't be treated to any gif-worthy Nick Young-style antics, it makes him much less of an offensive liability than conventional wisdom says he is.

And finally, in a conference where winning almost 60% of your games and nearly beating the league champions isn't enough to get you out of the first round, the Dallas front office deserves a pat on the back any time they manage to sign a player away from another Western Conference team. While this one may not bring the satisfaction of besting Darryl Morrey, and New Orleans is hardly the fiercest competitor the Mavs will face this season, it is a small victory, and what are the dog days of the off season for if not getting excited about small victories? And a small victory in the form of a smart, healthy, efficient small forward heading into his prime? That's pretty exciting.