Five Out Offense: Will Wayne find a home?

Plus: Mavs On a Budget, some international players to watch for, and more.

Share All sharing options for: Five Out Offense: Will Wayne find a home?

1. WHEREFORE ART THOU, WAYNE?: Poor former Maverick Wayne Ellington can't seem to find a landing spot, as he was waived by the Kings after being traded from the Mavs to the Knicks to the Kings. I really thought he showed that he can help a NBA team, especially after getting some pretty good burn while Jae Crowder was in Carlisle's doghouse for a few games last season. I hope there's a team out there who thinks so as well.

2. MAVS ON A BUDGET: Dallas Morning News asks who your All-Time Mavs Team would be if you had $15. What say you, MMB'ers? 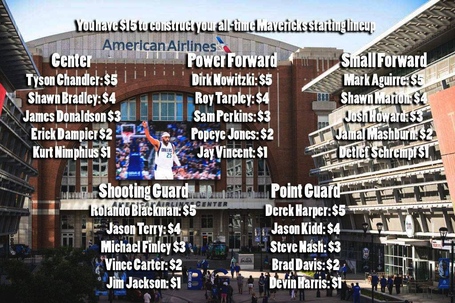 3. INTERNATIONAL PLAY CONTINUES: Chandler Parsons might be off Team USA but there are still a few potential future Mavericks in the mix. At ESPN, Marc Stein talks about Finnish PG Petteri Koponen and his goal to play in the NBA next year. The Mavericks own Koponen's rights.

4. SEXY PARSONS: Over at Fansided, Robby Kalland tells us his thoughts on what Chandler Parsons' theme musicshould be. Stick around for thoughts on other non-Mavs players!

5. SHAMELESS CROSS-PROMOTION: If you have not seen our All-Dog Mavericks Team, please proceed immediately to this link. My dog Emily thanks you in advance for reading. Also, cute dog pictures, hey, how can you go wrong?