The Dallas Mavericks reveal their alternates.

Share All sharing options for: Mavericks introduce new alternate jerseys with Dallas skyline for the 2015-16 season

Here are the new Dallas Mavericks jerseys! These are final designs, and the all-blue one on the top right will be used as an alternate jersey for the 2015-16 season. 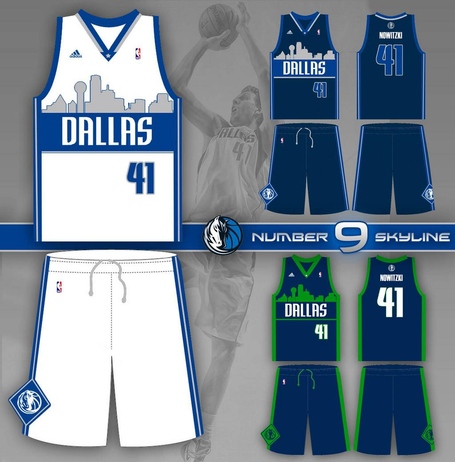 A look at the Mavericks' New Jersey that will be used in eight games in the 2014-16 season. pic.twitter.com/g27tAoePEn

The Mavericks announced them at today's 12 p.m. press conference. The jerseys were selected as part of Mark Cuban's contest on his blog, where he invited fans to submit their own designs. More than 1,000 jerseys were submitted, most, including the winning design, through the crowdsourcing website crowdSPRING.

The original design, submitted in the contest to Mark Cuban's website by @GeoffCase. Below is his submission. You can see the changes that were made -- the blacks won't be used -- but they're mostly the same.

Here's what he had to say about the inspiration of his design:

Explanation of the "Skyline design"

I knew people would remark that it was a Denver/Seattle rip but honestly I believe those are some of the best jersey designs in history. I also believe that we have more right as a city to have the skyline on a jersey than those other guys.

Here's why: The Mavs and the ACC are the main reason that downtown/uptown areas have been revitalized in the last decade. The Dirty/Filthy/Nashty/Cuban era got people excited about going to downtown again. Suddenly it was cool to catch a Mavs game and hit the bars afterward. Heck, you might have even seen Dirk and Nash playing pool. What better way to honor the turnaround of the Mavericks and the downtown area by cementing that legacy and story in a jersey design. It also provides emotional and visual context to the experience of going to a MAVS game with one of the city's most recognizable features. It incorporates the branding of the current mavs (cost effective) and gives me a killer jersey to rock in my video game that reps my city.

I just wanted to explain why I went the way I did with the design.