As Dallas announces an update to the team's look, let's remember how the Mavs' style has evolved over the years.

Share All sharing options for: A complete history of Dallas Mavericks jerseys

Yesterday, the Mavericks revealed the winner of the design-a-uniform contest that Mark Cuban hosted on his personal blog a while back. A ton of speculation went into yesterday's event about these uniforms. Which submission won? Were these going to be alternate uniforms or were the Mavs changing the primary look that has been around since 2001? Would the color green be making a comeback?

Ultimately the results were fairly underwhelming. The new uniforms are not replacing the Mavs' current look like some thought; all we got was an alternate that will be introduced next season. The primary feature of the new uniform is a version of the Dallas skyline on the chest, which is a great idea if done well (it is debatable whether that was accomplished).

This is the first major change in the team's look since 2010, when the away jerseys were switched from navy to royal blue. But how does it compare to some of the other interesting (if not always good) alternate jerseys through the years? I thought it would be fun to take a look at the evolution of basketball style in the Big D as we anticipate the new look the Mavs will don in 2015-16. While this is mostly a walk through history, I will also give my own grades on each uniform, based purely on my own aesthetic taste. Feel free to disagree if you must.

The original Dallas Mavericks wore white at home and blue on the road, with a bit of green accent on both. It was a simple, almost rustic, look, with a western font that seemed just right for the time. Both uniforms featured the quirky "M wearing a cowboy hat" logo on the left leg of the shorts. As was fairly common in the NBA, the home jersey featured the team name ("Mavericks") across the chest, and the road jersey featured the name of the team's home city ("Dallas"). However, after one season, blue became the accent color, with green becoming the primary color of the away uniforms.

The color scheme of green and blue was a really inspired choice. Not only did it pop, but it was unique. Plenty of teams wore blue, and a few (Boston, Utah and Milwaukee) wore green, but no one else in the league paired green and blue together. For me, these uniforms get major points for that alone.

Final verdict: While I'm not a big fan of western-themed looks, these uniforms were a great fit for Dallas's new expansion franchise. Furthermore, the Mavs' green and blue looked great and were a unique look in the NBA.

1993: Dallas becomes the boys in blue

The Mavs made a couple of slight alterations in 1992, but these were seemingly just preparation for the major change coming the next year. Starting in '93, Dallas decided to reemphasize blue, rather than the green that had been the team's identity for over a decade. While these uniforms didn't look terrible, the simple western look had begun to look a little boring and blue simply wasn't as unique or striking as the green away unis had been.

Furthermore, the Mavs wore these uniforms during the worst decade in the franchise's history. The '90s were just really insufferable for Mavs fans. Maybe the teams wouldn't have been quite so bad if they had been playing in more stylish threads.

Ok, yeah, that's probably a stretch. Anyways, by the time Mark Cuban bought the team in 2000, it was clear that the Mavs needed a style overhaul for the new millennium.

Final verdict: Blue just wasn't as fun or different as green, and the western theme grew tired after over a decade.

When he bought the team in January 2000, Mark Cuban instantly set about increasing the Mavs popularity in Dallas and nationally. Part of this was a complete rebrand in 2001, where a navy blue/royal blue/silver color scheme replaced the old green and blue. A modern logo featuring an aggressive-looking horse head melding into a basketball replaced the old M wearing a hat. The Mavs also added a couple of alternate "M" logos. One issue I've always had with the logo is that it uses black and royal, while everything else in this scheme uses navy and royal.

The jerseys themselves were decidedly modern and were a flashy change of pace from the simple look the Mavs rocked for their first two decades. The new look Mavs wore white at home and navy on the road. Interestingly, both the home and the away jerseys feature "DALLAS" across the chest. This makes sense, since "MAVERICKS" ended up being far too long and clunky in the new uniform font.

Final verdict: It is hard to be objective about these uniforms because these are what the Mavs have worn (more or less) as long as I've been a fan. For a franchise in desperate need of a new direction, this was a fresh new look that matched the brashness and bravado that Cuban brought to the team. I admit that I didn't realize how much I didn't really care for the navy away uniforms until they were replaced in 2010. 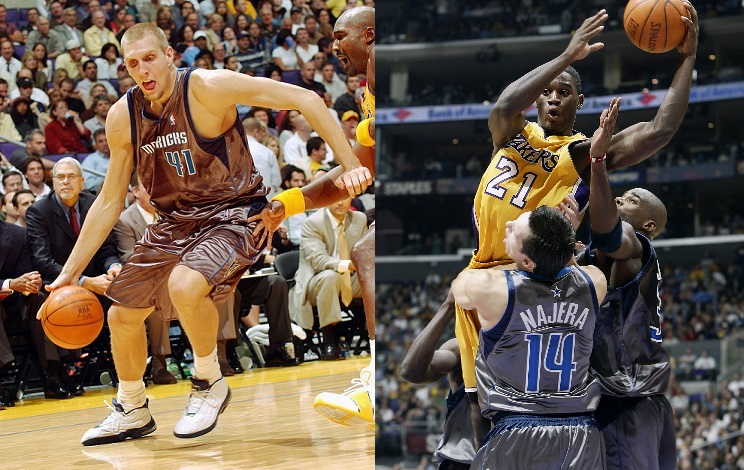 Mark Cuban (along with most of us) made some really questionable fashion decisions in the early 2000s, but this one probably takes the cake. I guess it takes a really creative mind to decide "yeah, silver trash bag material might make for really futuristic basketball uniforms." There's something to be said for trying something new and different, but these uniforms were universally panned for a reason. They looked really, really stupid.

Even if I try to take these seriously, I can't. "Mavericks" looks ugly and clumpy across the front. The material was awful. There's really nothing else to say.

Zero out of five stars. 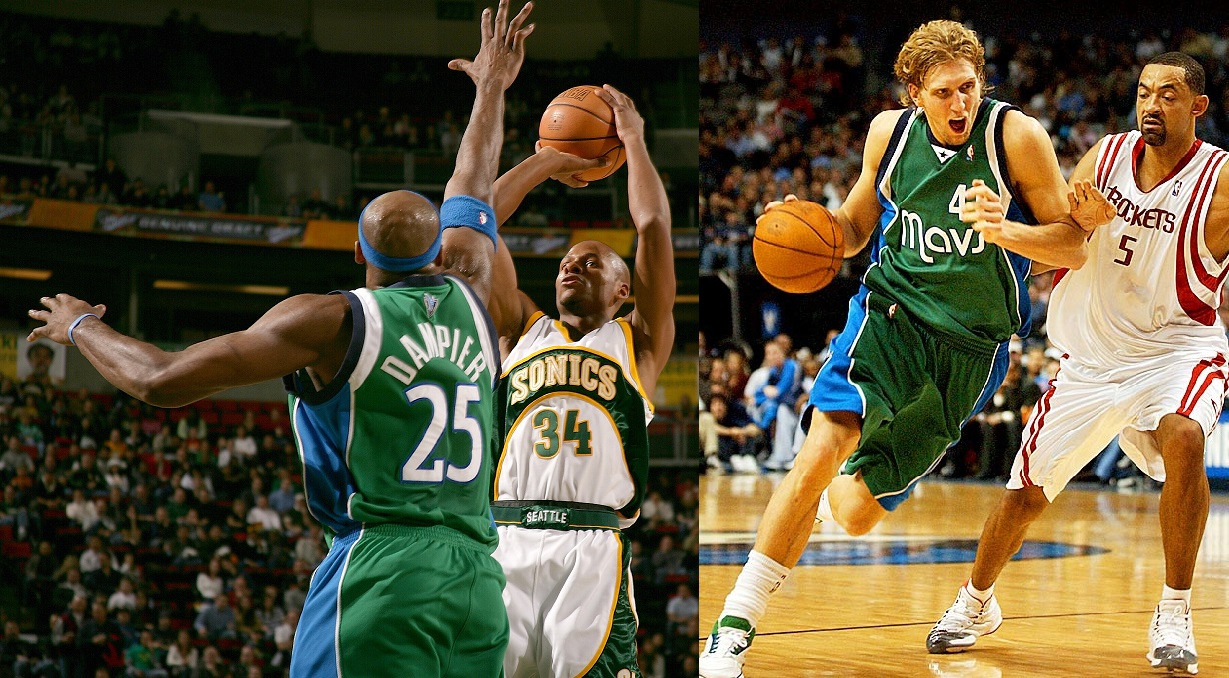 Full disclosure: these are my favorite Mavs uniforms ever. Yes, I realize there's too much going on here. Green and royal and navy and silver and white and ... too much. But they're different. And fun! If you don't like these uniforms, Diddy will hunt you down and give you a stern talking to, since he's the one who designed these beauties.

Seriously, these uniforms were unique without being over the top or garish. The cool font, the team nickname, the number above the wordmark. These were vibrant and fun. They probably would have been a little better if they stuck with one shade of blue, but really, this is just a solid alternate uniform. Bonus points for hearkening back to the franchise's green roots.

Final verdict: Despite working with a few too many colors, these uniforms were a fun change of pace that paid homage to Mavericks history while still fitting within the overall aesthetic of the Mavs modern look.

Four out of five stars.

These were nice, right? I wasn't happy that the Mavs got rid of the green, because I like alternate jerseys that are significantly different than the normal But these fixed the problems with the green alternate uniforms, namely that there were like five different colors going on. These looked stylish, but kept it simple with royal, navy, silver, and white. These uniforms showed how good the Mavs could look with a predominantly royal blue look.

Final verdict: Not green, but still really great. It feels like these uniforms paved the way for royal blue to take precedence as the primary away color the next year, so they definitely get point for that. I still prefer green, but at least these avoided the mistake of using too many different colors like the original Diddy uniforms.

Four out of five stars. 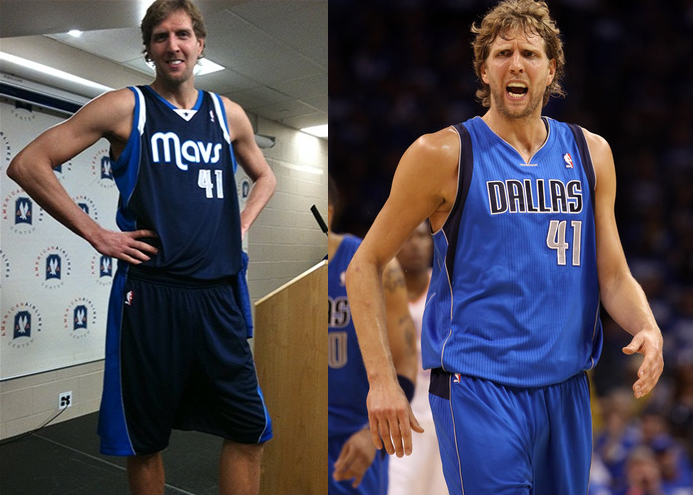 After nearly a decade, this uniform set had grown stale. Personally, I've always preferred the look of the Diddy-designed alternate uniforms than the main set with its random panels. In 2010, the Mavs managed to update this look solely by changing the colors around, and surprisingly, it totally worked. The away uniforms look so much better in royal blue than navy. And the alternate Diddy jerseys look fine in navy, though they were still better in green.

And because the Mavs looked better, they were able to play better, winning a championship in their first season wearing these uniforms. Surely it can't be coincidence that the best Mavs team in history was the first team to don the royal away uniforms. Maybe if this change had occurred in 2005 ... yeah, I'm not touching that with a 10-foot pole.

Final verdict: I'm (mostly) joking about the uniform update contributing to the championship, but suffice to say, swapping the colors on the away uniforms was an excellent decision. It breathed life into a uniform set that had become a little "blah."

2015: Dallas skyline allows the players to "rep the city"

When these uniforms were unveiled yesterday, reactions were mixed. People seem generally excited about the idea of having the Dallas skyline on the uniforms. Unfortunately, the jersey Cuban showed of at the media event, did NOT do a good job of depicting the Dallas skyline. The whole jersey looked fairly amateurish, and the skyline in particular looked like something someone designed in MS Paint in about 15 minutes. Which is odd, since the version in the mock up (the picture on the left) actually looks pretty great.

Cuban did clear this up, pointing out that the jersey he was holding was a rushed out prototype. Hopefully, the finished product will look quite a bit more polished. Several non-Mavs-fans immediately criticized the jersey for being too similar to Denver's retro alt jerseys, which also feature a skyline. To this I say, "so what?" Those Denver jerseys are fantastic, and the Dallas skyline is the greatest in the world.

Final verdict: If the jersey ends up looking more like the mock up originally submitted, this should be a pretty fun jersey. I still think the Diddy jerseys are an overall more stylish and refined look, but fans should really appreciate these if they are well done. However, if they still look mostly like what Cuban was showing off yesterday, these really aren't much better than the trash bag jerseys.

Three out of five stars (tentatively)