Positional Strength: How the Dallas Maverick wings compare in the Western Conference

Where to the Maverick small fowards rank among the other teams in the West?

Share All sharing options for: Positional Strength: How the Dallas Maverick wings compare in the Western Conference

Editor's note: This is part three of a five-part series breaking down the Mavericks at each position, as compared to the rest of the Western Conference. We're moving to Thursday for scheduling reasons, but make sure to catch the point guards and shooting guards.

The NBA three is a strange position, because almost everyone can play it in a technical sense and depending on how you view a lineup. Jason Kidd was the Mavericks' "small forward" during the three-guard lineups in 2010 and 2011, while Dirk Nowitzki played some three under Don Nelson back in the day. That's real weird.

But mostly, we all understand what the best fit at that position is: a tall and long athlete, a jack-of-all-trades, usually a scorer. The more basketball skills this player has, the better, and he'll often use those skills on every play. That's an important detail -- a good-passing center may only be used to his full abilities on certain plays, but a small forward is constantly being asked to do pretty much everything.

Chandler Parsons is the new Maverick starting small forward. He's taking over a position that actually has some history in Dallas: Rolando Blackman, Mark Aguirre, Jamal Mashburn all suited up there, and more recently, you have Josh Howard, Shawn Marion and Caron Butler.

Of course, Parsons is different than all of them. He's the best 3-point shooter of the bunch, shying away from the mid-range jumper that several of those guys based their entire game around. He's also longer and taller, while keeping his ball handling skills. I looked at the film to learn more about his offense last month, and will take a look at his defense in similar fashion sometime soon.

Behind him, Jae Crowder and Richard Jefferson actually compliment each other quite nicely. Jae, always a tough and smart player, will get his minutes regardless of how you or I personally feel about him (and I'm nicer than a lot of you guys). Jefferson's strength is Crowder's weakness -- he can shoot it, in volume and from anywhere.

I hope those two can play off of each other. Carlisle, always the master tactician, will be presented with plenty of chances to deploy those two situationally to best help the team.

1. Oklahoma City: I'm glad KD's staying with Nike. I don't want to live in a world where I can't buy this T-shirt. 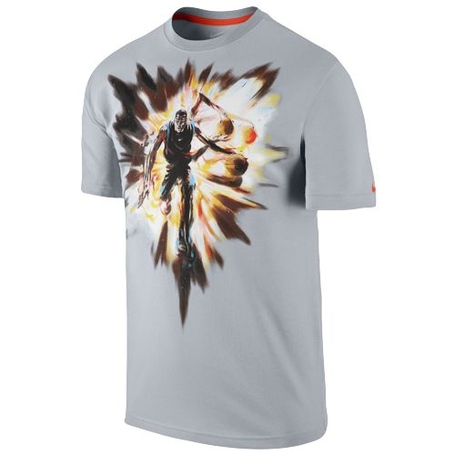 (but seriously that design is so unnecessary, please don't buy that)

2. San Antonio: Above us was an intentional break to indicate far of a gap there is between Durant and the other small forwards in the West. Next up, though, is Kawhi Leonard. Try as he might, Chandler Parsons isn't capable of being the best player on the floor in an NBA Finals series like Leonard was. Besides, when you remember he's got Kyle Anderson and Danny Green getting some play there, the Spurs are still a total machine.

3. Golden State: Igoudala is still great and Harrison Barnes is still young. While it was disappointing to see Barnes' sophomore slump, I'm certainly in no position to count him out.

4. Dallas: When deciding where to put the Warriors, Barnes was the factor that pushed them over. Parsons certainly has a youth advantage over Iguodala, but he's not so much better that he can carry the Mavericks over that one-two punch that the Dubs have.

"Those are high stakes," said Donnie, with a slight shudder at the thought of his 10-gallon going through an incinerator. "What's the question?"

"Who did you have rated higher last offseason, Chandler Parsons or Gordon Hayward?"

I'd be fascinated to hear his answer to this. The Mavericks had Parsons rated higher on the "Restricted Free Agents we probably could sign away," that much is clear. In their quest for a third star and future self-inflating roster moves for no apparent purpose (you get those second round picks and Jason Terry, Morey!), there was a possibility they'd let Parsons slip away. Utah, on the other hand, made it clear they were hanging onto Gordon Hayward. The move this offseason was clear.

But given a choice between the two in a vacuum? I don't know. Honestly, I might take Hayward by a hair (or maybe for his hair, which is glorious). But in Utah, Rodney Hood isn't a proven backup, so Dallas has the edge on this list.

6. Portland: Nicholas Batum is such a fascinating player, a 3-and-D wing who seems like maybe he could be way better but never really is. The Blazers have Dorrell Wright behind him, though, and that is an excellent and complimentary duo at the 3.

7. Denver: I <3 Danilo Gallinari and I really, really hope he's healthy throughout this season. I feel like most people don't realize this pass ever happened, and that's a travesty.

Wilson Chandler is also nice, although at the rate Dallas is going with their Chandler acquisitions, he might be a future Maverick.

8. Houston: Lost Parsons, added Trevor Ariza, kept Francisco Garcia. I said all offseason that the second guy will see some decline, out of a contract year and without John Wall as a distributor. If he's the exact same player he was last season with the Wizards? Houston might belong a spot or two higher, then.

Francisco Garcia seems to be his backup, and he's had a really good FIBA World Cup, for whatever that's worth.

9. Minnesota: The Timberwolves are going to be sooo fuuuuun. Here is a list of player who will play small forward throughout this season: Andrew Wiggins, Corey Brewer, Chase Budinger, Shabazz Muhammed. HNNNNGGGG.

I've said it and I'll say it again: Minnesota isn't going to be good. This is a weird mixture of players and the Timberwolves aren't contending for a playoff spot. But they will be fun, and on 10 p.m. on a random weeknight on League Pass, that's perfect.

10. Sacramento: Gay showed flashes of efficiency last year. Maybe he can finally turn into a really effective player after spending a full offseason with his new Kings teammates? Apparently his backup is someone named Eric Moreland, though? Maybe Derrick Williams worked really hard on his dribbling this summer (though it didn't seem like he was taking it as seriously as he should).

11. Phoenix: P.J. Tucker is a great fit for this roster, and I've been a Gerald Green fan ever since his Maverick days.

12. New Orleans: Tyreke Evans and John Salmons, True Detective Season 2? Or more likely, a C-roll straight-to-DVD horror film where Salmons ensnares victims and tortures them by making them watch Tyreke in a gym shooting jumpers. (This is maybe too mean towards Tyreke. It's not like he's totally inept on the basketball court. If one of my rankings is wrong, this is probably the one.)

13. Memphis: Ah, the two "ince"s, Prince and Vince. I have a hypothesis that Carter, four years older than Tayshaun Prince, will look four years younger on the court.

Dear God, this is definitely the year Kobe's going to strangle one of his teammates.

15. LA Clippers: I've mostly moved past my hatred of NBA players. Even for someone like Lamar Odom, it seems like drug addictions were a big part of his terrible attitude. But Matt Barnes is the worst and I refuse to listen to any arguments otherwise. And the Clippers back up here is Carlos Delfino, so yeah.