The Mavericks will have some major rotation changes this season, but how does this year compare to last?

Manager's note: This week, we will be publishing trial posts from our MMB finalists. With almost 100 applicants, thanks to those who sent an email. This piece is by Jamie Plunkett; enjoy!

As a diehard Mavericks fan, it was great to see the Mavs push San Antonio to seven games in the 2014 NBA Playoffs. However, it was a little disheartening to see how easy it was for the Spurs to blow past Dallas in Game 7, quite literally.

While we saw two great coaches battling it out in that playoff series, eventually the lack of defensive ability caught up with Dallas. Jose Calderon was the biggest defensive liability, which saw him sitting late in games in favor of Devin Harris, despite Calderon's uncanny ability to run the offense.

This wasn't limited to the playoffs. As it has been for the past few seasons, outside of Shawn Marion, the Mavs have encountered a dearth of defensive ability on the perimeter, while having a slew of offensive threats in the rotation. The question now is, will we see more of the same in 2014-15, or will we see better displays of defense with a not-so-potent offense?

Before we break-down the player-to-player comparisons, let's recap the changes:

Let's just start with the Obvious Statement of the Day: Jose Calderon cannot be replaced offensively. On the surface, it looks like you're replacing an 11/5(assts) guy with a 12/7 guy, which most people would be fine with. A closer look though shows that it's not that simple.

Calderon's 44% three-point shooting, plus his passing, and his general ability to run the offense can't be replaced by any one player, and it'd be unfair to Nelson to expect that from him. Compare their shot charts from last season. 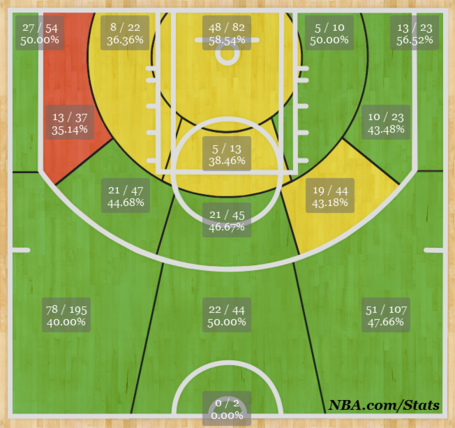 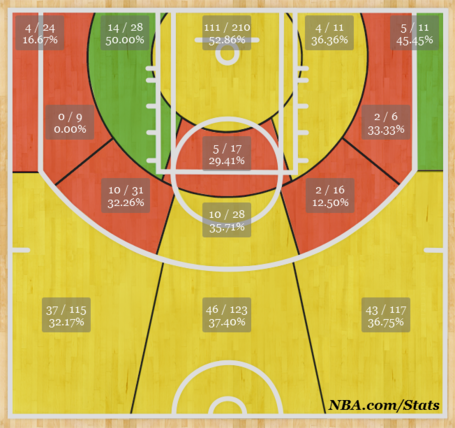 Ultimately, according to basketball-reference's offensive win shares stat, which you can read about here, Calderon reps a 5.4 to Nelson's 1.6. A lot of this had to do with the respective offenses they were in. While Calderon had Ellis, Dirk and Vince to work with, Nelson was working with guys like Victor Oladipo and Aaron Afflalo (good players, but not at the same level as Ellis/Vince, IMO).

Defensively, Calderon had a defensive rating (average points allowed per 100 possessions) of 112 to Nelson's 111. Similarly, Nelson edged out Calderon in defensive win shares, 1.2 to 0.8. However, it seems that neither of the two is exactly proficient on the defensive end of the court.

Frankly, I'm sad to see Marion go, despite his aging, and despite the fact he couldn't quite move around like he used to. However, he was becoming a liability on the offensive end, despite the resurgence of his three-point shot. Meanwhile, Parsons has been gaining momentum offensively over his three seasons in the league, and looks primed to break out with a more expanded role in Dallas. 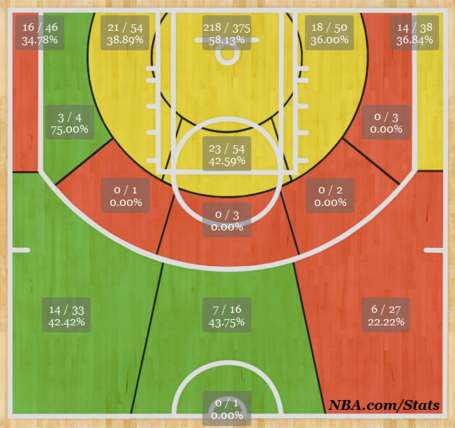 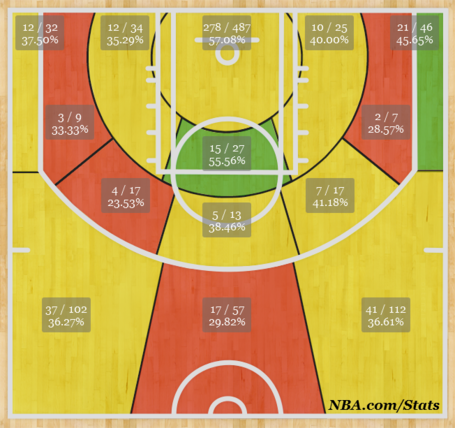 Here's the surprising part. Their defensive rating? Identical, at 108 apiece, and Parsons actually edges out Marion in defensive win shares, 2.5 to 2.1. Now, is this a perfect method for determining who is a better defender? Probably not. We've witnessed Marion's lockdown defense for the past five seasons, and we've also heard about how Parsons' defense has been on the decline. Not to mention, Marion has better numbers when it came to steals (90 to 88), blocks (37 to 25) and personal fouls (125 to 168) in 2013-14.

However, if Parsons can provide adequate defense while vastly improving the starting small forward spot offensively, and we couple that with his youth and high ceiling, he edges out Marion, if only slightly.

Much like Calderon, Vince Carter cannot be fully replaced on this squad simply because of the grit and determination he instilled in this team. I still think he'll fit perfectly in Memphis. However, in to replace him is a former teammate, Richard Jefferson, a guy who, when discussing the Mavs in passing, always escapes my mind as a new face on this team. The two seem rather similar at first glance, and their stats back that up. 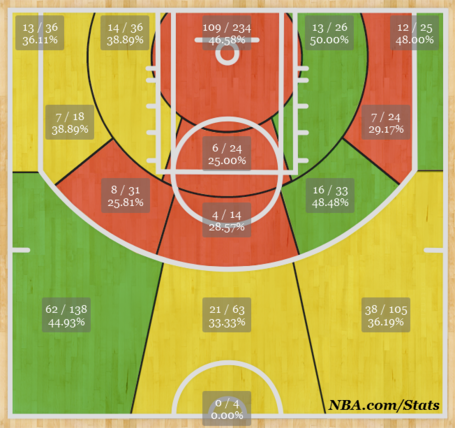 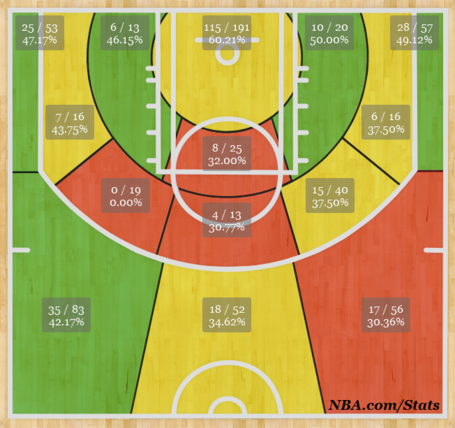 Jefferson's game is slightly better than Carter's around the rim, a great improvement at the corner three, albeit less effective from the right elbow out to the right wing.  Not to mention, Jefferson's field goal percentage (45%) and three-point percentage (40.9%) was much higher than Carter's (40.7% and 39.4% respectively, and yes, Carter took about 150 more shots on the year).

Jefferson's offensive rating matches Carter's (109), while his defensive rating is slightly lower (114 to 110). However, while he recorded fewer steals and blocks than Carter, Jefferson also managed fewer turnovers and 41 fewer personal fouls over the course of last season.

With the way the new offense is structured, Jefferson probably won't be called on as often as Carter was in previous seasons, which may help maximize his efficiency. However, there's no replacing VC in my heart, so the edge goes to Vince.

Realistic or not, it's safe to say most Mavericks fans probably had "We Are the Champions" playing in their head when the trade for Tyson Chandler was announced. Let's face it though, he's four years older, and has fallen back into his injury-riddled ways, which means that expecting the same Tyson Chandler from 2010-11 is unreasonable. That's not to say he won't be an upgrade from Samuel Dalembert, who mostly just stood in one place and dropped passes last season. 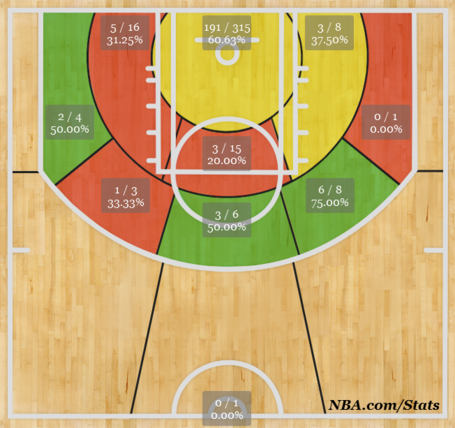 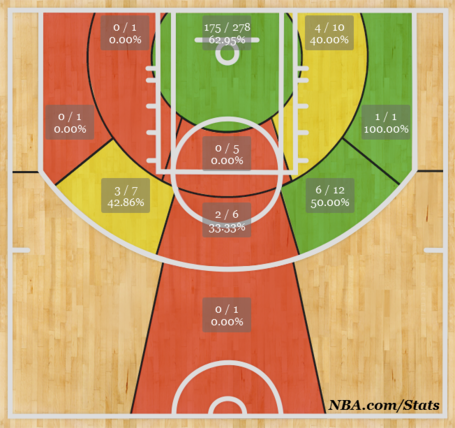 I almost didn't include shot charts for these guys, because when you look at what they're required to do in this offense it doesn't really make sense. However, for consistency's sake, here they are.

Frankly, we all know what Tyson's role on this team will be. As long as he's healthy, he'll be in the middle of the paint turning back anyone who wants to get to the rim, while offensively he'll be throwing down the occasional (or semi-regular) lob from Harris. His job, as it was in 2010-11, is to mask the defensive inabilities of Dirk, while providing help to the guards when guys try to drive the lane.

I've already run long at this point, but suffice it to say that Felton and Aminu provide more depth than Larkin and Ellington did a season ago. Felton, in a backup role, should be serviceable as long as his minutes are limited, and Aminu can come in and get stops, again, in limited minutes. Neither will be major players (or at least, hopefully won't be), but they're the kind of depth needed to provide the guys ahead of them with adequate rest throughout the season.

With all that said and done, I'd say the current Mavs have a slight edge over the Mavs of days past. Not to mention, this team still has Monta and Dirk, so the offense is already in good hands. With the new faces on the roster, I'd say this team has a good chance of being better defensively, while still being a Top 5-8 team offensively in the league.