After almost an entire season of looking old and feeble, Dirk Nowitzki is heating up just as the Mavericks prepare for the gauntlet of the Western Conference playoffs.

Share All sharing options for: Dirk Nowitzki is finally rounding into form in time for the playoffs

Full-disclosure: I have magical wizard powers. I figured I need to let y'all know.

Unfortunately my magical wizard powers don't extend very far. I can't shoot fireballs or freeze things or move objects with my thoughts. No, my one-sole magic power is being able to control the fate of Dirk Nowitzki's shot.

Case in point: on November 20, I published a piece titled "Dirk Nowitzki keeps holding off time, isn't slowing down anytime soon." It was a piece that reflected Dirk's ridiculous start to the season, capped off by a dramatic dagger three pointer in a road win over the then frisky Washington Wizards. I had just seen Interstellar, Dirk was posting a 54.7/44.4/84.2 shooting slash-line and the Mavs were rolling. I felt good.

That's when everything changed.

That first piece was written at the end of November. In December, Dirk posted one of the worst months of his career -- he shot 43.5 percent from the field, 27.8 percent from three. What made matters worse was Dirk started missing an abnormally large amount of open shots, according to NBA.com.

It got so bad, I highlighted it in my next story about Dirk this season. I detailed how at the time, Dirk was making just 47 percent of his open two-point jumpers and around 43 percent of his two point jumpers with a defender near him -- a.k.a. those patented face-up mid-post jumpers Dirk likes to take so much. 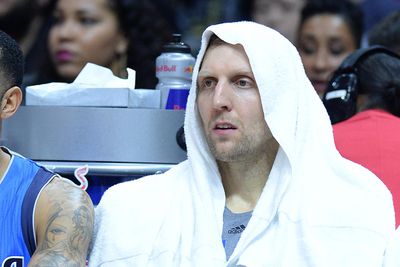 A look behind Dirk's awful slump from December

It was so bad that Dirk was making just 35 percent of his wide-open three pointers (no defender within six feet) and just hitting 43 percent of his shots from 8-16 feet out. There were mentions of Dirk struggling with a back injury and a stomach ailment.

After I wrote that post? The next night against Denver, Dirk drilled four three-pointers and scored 25 points in a win against Denver. I was beginning to see the power.

It didn't last long after I praised Dirk until I changed Dirk. Dirk closed out January with an awful slew of games and then proceeded to stink in February, shooting 28.6 percent from three for the month.

If you follow me on Twitter, you know Dirk has an unusual knack since I wrote that Dirk slump piece to hit a shot after I call-out how bad he's been on Twitter. "Dirk looks awful tonight." Dirk drills two straight threes. "Dirk can't post up anymore." Dirk drills contested fade. "Dirk can't take over in the fourth quarter anymore." Dirk leads comeback against Portland.

It's been uncanny. That's why I come to you with a heavy heart, realizing what this post could do: I've come to praise Dirk Nowitzki and wonder if PLAYOFF DIRK is coming.

Just take a look at Dirk's April: 52.2 percent shooting, 20.2 points per game. It's by far his best start to a month since November. Digging deeper, Dirk is starting to actually look like Dirk again.

He's facing up more in the mid-post and knocking down those jumpers. He's posting up a little more. He's taking over a little more. The numbers bear it out. Just look! This is from March 29 (when the Mavs played the Pacers) through the Nuggets game on April 10, from NBA.com.

Are there caveats? Sure. He's played some bad defensive teams this month, his defense has degraded to a rock-bottom-level (there's no way Rick Carlisle can legitimately play Dirk and Amar'e together in the playoffs, can he?) and his rebounding hasn't perked up.

BUT. He's scoring. He's taking over. He's not just standing around the arc during stretches where the Mavs can't find a bucket. Back in March, ESPNDallas.com's Tim MacMahon detailed how Dirk has been battling old-age this season.

Weight work, particularly focused on the legs, remains a priority for Nowitzki during the regular season, even at the expense of sapping some energy for games. Flexibility training and intense, extended stretching sessions are also part of the program. The plan is that the payoff will come when he's strong for the playoffs.

Nowitzki constantly talks trash to teammates and staffers during his off-court workouts, finding that to be the best way to motivate himself. But this part of the job isn't a lot of fun.

"Sometimes you don't really feel like going to the weight room and getting a session in or even stretching," said Nowitzki, who has long adhered to a strict diet and sworn off alcohol during the season. "It's just sometimes annoying, but I know in the long run that it helps me, especially if I want to play out this contract at a decent level for the next three years."

For the life of me, I will take a mundane, mediocre regular season from Dirk if it means we get vengeful, angry playoff god-mode Dirk later this month. But in the interest of my magical wizard powers, I end with this: