Luka Doncic turned the tables against the Clippers’ Ivica Zubac, powering the Mavericks to a 2-0 lead

The Mavericks superstar has gained the upper hand in a matchup that caused problems last season.

Share All sharing options for: Luka Doncic turned the tables against the Clippers’ Ivica Zubac, powering the Mavericks to a 2-0 lead

By far one of the strangest things to happen to Luka Doncic in last season’s playoffs was how much Clippers center Ivica Zubac’s frustrated Doncic. Just glancing at the two on the floor at the same time, you’d figure Zubac’s relative lack of speed or athleticism would mean Doncic would have a field day. That just never happened.

Last season, Doncic’s shot diet was almost entirely threes and at the rim. Only 51 of his 1,255 field goal attempts were classified as midrange shots. In the 2020 playoffs, that trend followed: only 11 of his 128 shots in the first round loss were midrange shots. He struggled from midrange too, making just 3-of-11. When Zubac was on the floor, the Clippers deployed a drop scheme that cut off Luka’s path to the rim and enticed him to shoot longer jumpers, which he struggled with. Without a reliable midrange game, Doncic didn’t have a proper counter to throw at Zubac.

When Zubac was on the floor in the 2020 playoffs, Doncic shot 43.8 percent from the floor and had a 54.4 true shooting percentage. The Mavericks record-breaking offense only scored 100.4 points per 100 possessions in those minutes, good for a minus-23.3 net rating. The combination of Zubac’s footwork, good hands, smart instincts and Doncic’s lack of in-between game doomed the Mavericks offense whenever Zubac was on the floor. To make matters worse, Zubac was important to the Clippers on the other side of the ball as well, carving up the Mavericks defense with solid screens and hard rim runs in the pick and roll.

What a difference a year makes. If you’ve been following Doncic’s season, it’s no surprise how improved he is in the midrange. After taking just 51 midrange shots last season, he took 183 of this season, making 89 of them (48.6 percent). Now, exchanging threes for long twos isn’t typically great and it was clear that some of Doncic’s boost in midrange attempts came from a harder time getting to the basket. Still, being a three-level scorer is hugely important in the NBA playoffs and we’re seeing the fruits of Doncic’s labor in this playoff rematch against the Clippers.

The Dallas Mavericks must play the Clippers centers off the floor

Zubac has basically been played off the floor through two games. He’s averaging 20 minutes per game (compared to almost 25 minutes per game against the Mavericks last playoffs), thanks to Doncic obliterating Zubac whenever the two are matched up. Almost all of it is coming thanks to Doncic’s improved midrange game. Rim walled off? Not a problem for Doncic. Instead of plowing his way into a blocked shot or turnover, Doncic has calmly nailed turnarounds and one-legged fadeaways. His jumper is just better overall — Doncic shot a career-high 35 percent from three in the regular season and has made 42 percent of his threes in the playoffs so far, a big jump from last playoff’s 34.7 percent mark.

With Zubac on the floor in these past two games, Doncic is shooting 59.1 percent from the floor and has a 69.8 true shooting percentage. The Mavericks offense is scoring a staggering 148.5 points per 100 possessions in Zubac’s minutes, good for a 51.5 net rating.

After Doncic stole the Clippers’ souls in Game 1, they tried to mix it up early in Game 2 with Zubac hedging Doncic hard during a pick and roll, with Zubac meeting Doncic at the three line. It did not end well.

With Doncic playing Zubac off the floor, it’s forcing the Clippers into their small-ball lineups for longer stretches of each game. Los Angeles goes with Marcus Morris at center and while this lineup has the ability to switch everything, it also means the Clippers don’t have a true rim protector. No big man on the floor makes things much easier in the paint for Doncic and the Mavericks guards and the Mavericks haven’t even needed to screen a lot for Doncic to get him downhill toward the basket in these scenarios.

Stats Rundown: 5 numbers to know as the Mavericks win Game 2 against the Clippers

Compared to last playoffs, the Mavericks are shooting about two percent better in the restricted area and increasing their share of shots at the rim by another two percent. These are small numbers, but with the margins so razor thin in high leverage playoff games, every possession matters. 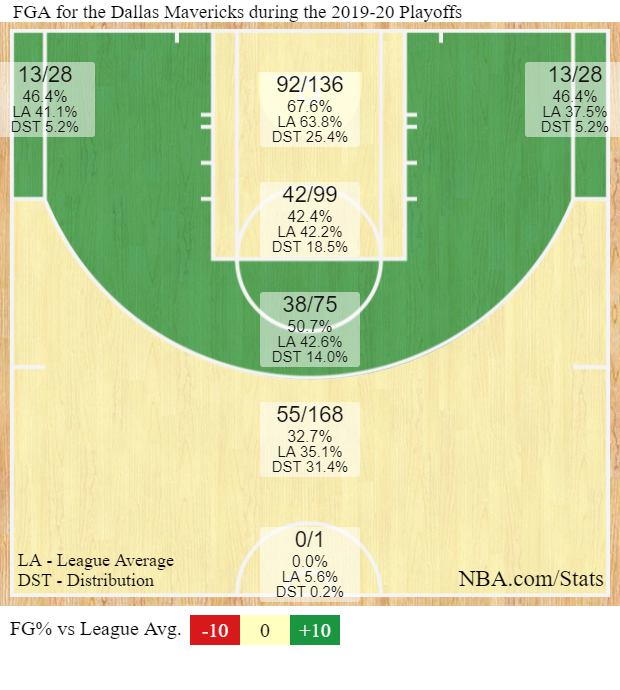 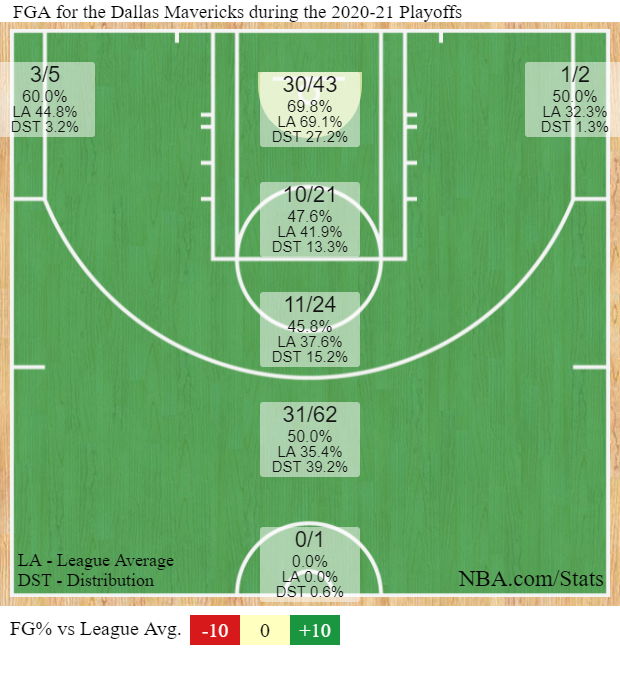 This isn’t even mentioning that with Zubac off the floor, the Clippers are losing one of their best rebounders and screen setters on the roster. The Clippers offense just isn’t as potent this playoffs compared to last season, as Zubac freed up the Clippers perimeter playmakers and shooters with both on and off ball screens.

Defensively, the Clippers have thrown just about every tactic at Doncic since he’s blown up Zubac’s minutes. They trapped him hard in the second half of Game 1, only to see the Mavericks role players step up. They’ve gone small, they’ve switched, they’ve put their two best defenders on him 1-on-1 — nothing has seemed to work. This feeling was personified in Game 2 when Doncic burred a falling jumper against Kawhi Leonard. The Clippers almost feel helpless.

Dallas is still just halfway to winning the series and Doncic will need to keep up the hot shooting. Despite the Mavericks offense operating at unreal levels, the total margin of victory in the two games has been a total of 16 points. There isn’t much room for slippage, but the Mavericks offense is showing no signs of slowing down. Doncic’s adaptability fueled by his improved jumper on all parts of the floor has pushed Clippers to the edge of another collapse and the Mavericks on the verge of their first playoff series win in 10 years.

Here’s the postgame podcast, Mavs Moneyball After Dark. If you can’t see the embed below “More from Mavs Moneyball”, click here. And if you haven’t yet, subscribe by searching “Mavs Moneyball podcast” into your favorite podcast app.